The Truth about the Soviet Gulag - Surprisingly Revealed by the CIA

"Humanitarian" lies serve to brainwash the population into supporting imperialist wars. Fed by far-right propaganda, and funded by the CIA, the mainstream “news” outlets describe the Soviet labour camps – also known as the “the Gulags” – as Stalin’s means to repress pro-democracy dissidents and to enslave the Soviet masses. However, the same CIA that, through Operation Mockingbird, gave the US military almost-total control over mainstream press in order to foster anti-Soviet disinformation (Tracy 2018), has recently released declassified documents that invalidate the slanders surrounding the Gulags.

The CIA which conducted various anti-Soviet operations for almost five decades, and whose staff strived to obtain accurate intelligence about the USSR, cannot be said to have any bias in favor of the USSR. Therefore, the following declassified CIA files that surprisingly “confess” in favor of the Soviet Union are particularly valuable.

While acknowledging the harsh conditions that existed in the Gulags – as with any prison system in the world – the goal of this article is to shed light on the following facts: (1) the harshness of the prisons has been exaggerated by the Western press, with numerous lies being made up, (2) the statistics in regards to the Gulag population have been exaggerated, (3) there was a genuine effort at improving the prison conditions when given the chance, and (4) the prison standards were much higher than those of many capitalist countries.

<u>The Conditions of the Prisons</u>

A 1957 CIA document titled “Forced Labor Camps in the USSR: Transfer of Prisoners between Camps” reveals the following information about the Soviet Gulag in pages two to six:

1. Until 1952, the prisoners were given a guaranteed amount food, plus extra food for over-fulfillment of quotas

2. From 1952 onward, the Gulag system operated upon "economic accountability" such that the more the prisoners worked, the more they were paid.

3. For over-fulfilling the norms by 105%, one day of sentence was counted as two, thus reducing the time spent in the Gulag by one day.

4. Furthermore, because of the socialist reconstruction post-war, the Soviet government had more funds and so they increased prisoners' food supplies.

6. A CIA study of a sample camp showed that 95% of the prisoners were actual criminals.

7. In 1953, amnesty was given to 70% of the "ordinary criminals" of a sample camp studied by the CIA. Within the next 3 months, most of them were re-arrested for committing new crimes.

The following are excerpts of the CIA document, underlined and put together for the reader: 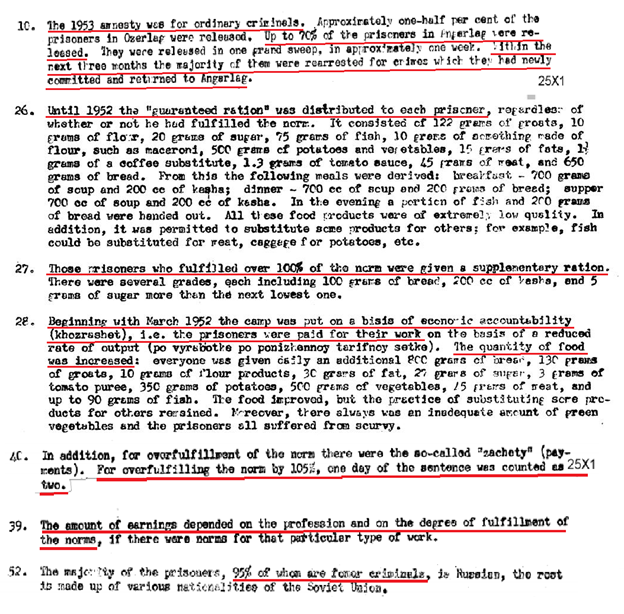 These facts negate the narrative that Gulag prisoners were unpaid. The labour was indeed forced; however, material rewards were provided. The prisoners were paid from 1952 onward, and rewarded by food prior to 1952.

According to bourgeois fantasies, the Soviet “regime” sought to deliberately starve the Gulag populations. However, as a matter of fact, there indeed were Soviet efforts to increase the food supply of prisoners, after World War II.

All the while, the noteworthy fact is that criminals, not “pro-democracy revolutionaries” were sent to the Gulags. Like all justice systems, there certainly were errors and some innocent people were sent to the prisons; the point though is that this fact has been exaggerated by the imperial press.

Let’s compare the Soviet system to that of the United States. The 13th amendment permits prison slavery, with many prisoners victimized by racial profiling. Even the Clinton Dynasty had slaves in the Arkansas Province (News 2017).

According to page four of another CIA (1989) document titled “The Soviet Labour System: An Update,” the number of Gulag prisoners “grew to about 2 million” during Stalin’s time. 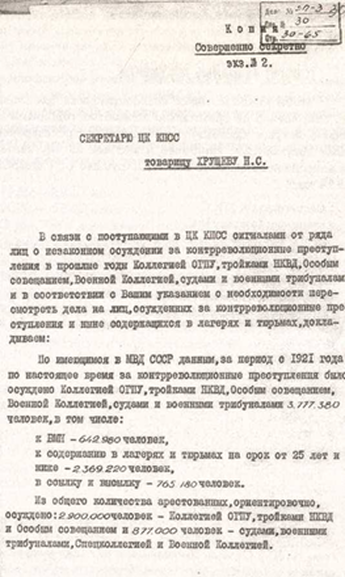 The Soviet archives remained declassified for decades, only to be released near or after the collapse of the Soviet Union. In addition, after Stalin died, the pro-Stalin head of the NKVD (Soviet interior ministry) Lavrenty Beria had already been executed by Khrushchev, a staunch anti-Stalinist (History in an hour 2010). These facts make it very unlikely that the Soviet intelligence would have a pro-Stalin bias.

"In 1993, for the first time, several historians gained access to previously secret Soviet police archives and were able to establish well-documented estimates of prison and labor camp populations. They found that the total population of the entire gulag as of January 1939, near the end of the Great Purges, was 2,022,976. At about that time, there began a purge of the purgers, including many intelligence and secret police (NKVD) officials and members of the judiciary and other investigative committees, who were suddenly held responsible for the excesses of the terror despite their protestations of fidelity to the regime.

"Soviet labor camps were not death camps like those the Nazis built across Europe. There was no systematic extermination of inmates, no gas chambers or crematoria to dispose of millions of bodies…. [T]he great majority of gulag inmates survived and eventually returned to society when granted amnesty or when their terms were finished. In any given year, 20 to 40 percent of the inmates were released, according to archive records. Oblivious to these facts, the Moscow correspondent of the New York Times (7/31/96) continues to describe the gulag as 'the largest system of death camps in modern history'.

"Almost a million gulag prisoners were released during World War II to serve in the military. The archives reveal that more than half of all gulag deaths for the 1934-53 period occurred during the war years (1941-45), mostly from malnutrition, when severe privation was the common lot of the entire Soviet population. (Some 22 million Soviet citizens perished in the war.) In 1944, for instance, the labor-camp death rate was 92 per 1000. By 1953, with the postwar recovery, camp deaths had declined to 3 per 1000.

"Should all gulag inmates be considered innocent victims of Red repression? Contrary to what we have been led to believe, those arrested for political crimes ('counterrevolutionary offenses') numbered from 12 to 33 percent of the prison population, varying from year to year. The vast majority of inmates were charged with nonpolitical offenses: murder, assault, theft, banditry, smuggling, swindling, and other violations punishable in any society."

Thus, according to the CIA, approximately two million people were sent to the Gulag in the 1930s, whereas according to declassified Soviet archives, 2,369,220 up until 1954. When compared to the population of the USSR at the time, as well as the statistics of a country like the United States, the Gulag percent population in the USSR throughout its history was lower than that of the United States today or since the 1990s. In fact, based on Sousa's (1998)research, there was a larger percentage of prisoners (relative to the whole population) in the US, than there ever was in the USSR:

“In a rather small news item appearing in the newspapers of August 1997, the FLT-AP news agency reported that in the US there had never previously been so many people in the prison system as the 5.5 million held in 1996. This represents an increase of 200,000 people since 1995 and means that the number of criminals in the US equals 2.8% of the adult population. These data are available to all those who are part of the North American department of justice…. The number of convicts in the US today is 3 million higher than the maximum number ever held in the Soviet Union! In the Soviet Union, there was a maximum of 2.4% of the adult population in prison for their crimes – in the US the figure is 2.8% and rising! According to a press release put out by the US department of justice on 18 January 1998, the number of convicts in the US in 1997 rose by 96,100.”

Seeing the USSR as a major ideological challenge, the Western imperial bourgeoisie demonized Stalin and the Soviet Union. Yet after decades of propaganda, declassified archives from both the US and USSR together debunk these anti-Soviet slanders. Worth our attention is the fact that the CIA – a fiercely anti-Soviet source – has published declassified documents debunking the very anti-Soviet myths it promoted and continues to promote in the mainstream media. Together with declassified Soviet archives, the CIA files have demonstrated that the bourgeois press has lied about the Gulags.

Central Intelligence Agency (CIA). (2010, February 22). 1. FORCED LABOR CAMPS IN THE USSR 2. TRANSFER OF PRISONERS BETWEEN CAMPS 3. DECREES ON RELEASE FROM FORCED LABOR 4. ATTITUDE OF SOVIET PRISON OFFICIALS TOWARD SUSPECTS 1945 TO THE END OF 1955. Retrieved January 5, 2018, from https://www.cia.gov/library/readingroom/docs/CIA-R...

This is a rare administrators note. We were concerned over this post due to it's critique of criticism against the state socialist Gulag system. In the end we decided to let it be published since it does not openly support gulags itself. Thus, we think it is better to let it be published in the spirit of openness and give the chance for critique.

This is stalinist propaganda. Prisons are prisons. And the ones who support them should burn inside them.

What total bullshit. Why even bother publishing something like this here.

regardless of how we feel about prisons let’s be honest here, capitalist propaganda dominates the dialogue in the general population and there are a lot of myths about what happened behind the iron curtain. If we want to have a real critique of the USSR we need to start at a point of facts not US imperialist propaganda. Otherwise we risk giving ammunition to reactionaries that equate socialism and even anarchism to fascism in an effort to discredit anti capitalist movements.