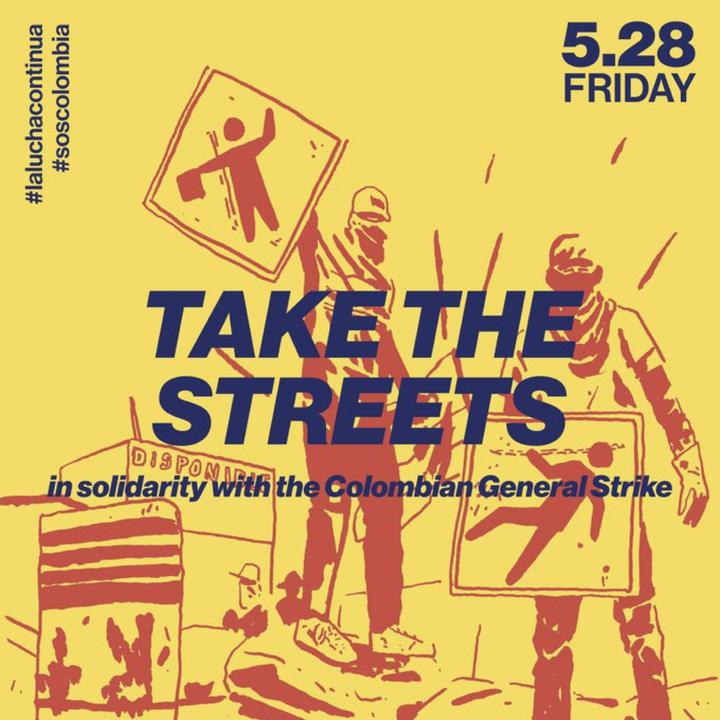 Take to the streets — in solidarity with Colombian General Strike!

Revolutionaries in Colombia have been resisting the police and US-backed right wing Duque regime in the streets for the past month. In solidarity with the Colombian General Strike, take action on 5/28!

Since April 28, Colombians have been blocking roads and shutting down the flow of capital to reclaim common spaces for joyful life. Two recent interviews with protestors in Bogotá and Cali detail the fight and lives at the barricades of the Colombian General Strike. This mass popular mobilization stands against unlivable conditions,authoritarian neoliberalism and the brutality of the narco-state. The police and military have met protesters with vicious repression. Amid internet blackouts, at least fifty people have been murdered, over 160 disappeared, and over 20 blinded.

We cannot sit by in the seat of empire as people are murdered and maimed for fighting against state violence, not only in Colombia, but in Palestine, Myanmar, Chile, too many places across the world.

We call on comrades in the US to block the streets and, like the Colombian protesters, turn the barricades into community spaces! The fight against all state and colonial violence is our common cause! Join the strike on 5/28! Take to the streets!

Solidarity can come in many forms. Organize an action according to what you think will be most effective in your area. “Now is the time to shout that in Colombia the government is killing people for protesting,” la lucha continúa!

Thank you so much for this!