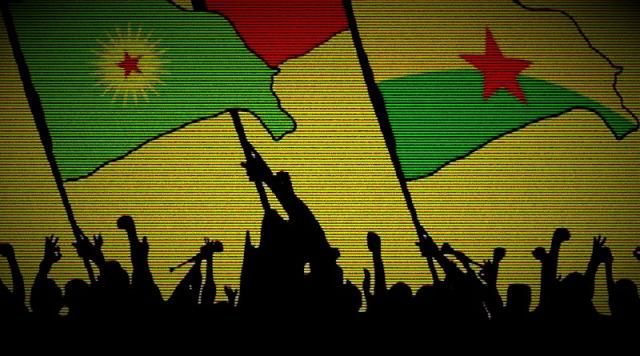 Rojava: Urgent Message from an Anarchist Comrade in Afrin

The Erdoganist army and its barbarian allies (namely the Turkish backed Free Syrian Army /TFSA & the so-called Syrian National Army /SNA) invaded 4 outer villages and 4 defensive points in the Afrin region. They are moving really very slow. They have air power and more superior weapons than us but our defense line fuck Erdoganists and their Syrian terrorists’ moral. Erdogan’s fighter jets are bombing blank points. His special operations units are fearful of moving into the Afrin city center. Our last stand defense line can survive at least 4 months. Yes unfortunately, without international support, Erdoganists can invade Afrin. But it will be a great chaos for them. Erdoganist army will be sad!

Comrades, we need your help more than everything. Its a life or death situation. This invasion isnt only about Afrin nor Rojava/Assyria/N. Syria but Erdogan wants to invade also the whole border territory, including Iraq’s Ezidistan (Zoroaster Kurdish lands /Sinjar), Ninewah (Iraqi Assyria), Turkmeneli (Iraqi Shia Turkomans) and Iraqi Kurdistan’s Qandil mountains area (PKK’s HQ and dissidents and opressed people’s refugee villages and camps). Its clearly IMPERIALISM and he wants to destroy everything and massacre every people he just hate.

Another important thing is Turkish and Bakur (Turkish Kurdistan) Kurdish comrades situation. Before the invasion, Erdogan first invaded Turkish Kurdistan and Eastern Turkey to eliminate PKK and her Turkish Marxists allies. Not only guerrillas but also autonomous municipalities were invaded. Erdogan and his fake opposition (Kemalists and Nationalists) are all fascists, they even arrested members of parliament from HDP (pro-Kurdish and Turkish Marxist alliance, 3rd biggest party in parliament). Our comrades in Turkey and Turkish Kurdistan are in HELL.

In Western Turkey (İstanbul, Ankara, Smyrna regions) anarchists are suffering. We even lost contact with lots of groups. For example there has not been any statement from DAF (Revolutionary Anarchist Movement) nor Kara-Kızıl (Black-Red). Comrades from Kara Bayrak Otonomu (Autonomous Black Flag) are missing (possibly arrested without legal process). All HDP coalition and anarchists of Turkey paying the “heaviest price” after Afrin.

We need your help. This war is chaotic already and our military power is decreasing day by day, we need to protect our comrades (and their families!) from Erdogan’s revenge and torture dungeons. Without international support, he will kill us one by one. Please make something. We are dying. Please hear us.

Western comrades, your warlord countries made this hell. Especially USA and EU made our “shithole countries” like this, after their Iraqi War and Syrian Civil War. When we ‘fix’ our broken land and defeated the Islamic State, your countries ‘support’ us(!) and saw us as their ‘coalition partner’, when Erdogan started the invasion they all played blind! We are not Barzani, we wont forget! They remember ‘PKK case’ like a miracle? What is chance? ISIS HAS GONE! Your countries SOLD US!

So make them regret this.

If Rojava, Bakur, and we, revolutionaries lose, also YOU will lose. Rojava, like Chiapas, is not only our gain but its part of the anti-neoliberal global revolution.

So all anarchists, anti-authoritarians, revolutionary Marxists and democratic confederalists have to support us and have to do something to stop this war.