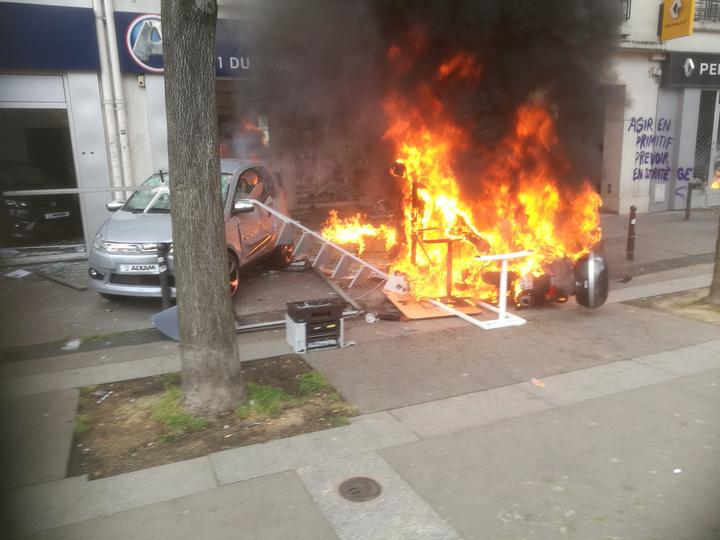 Reportback #MayDay in Paris: Nothing is over, it’s all beginning

On Monday night (April 30) many tweets were going round about the route of this years May Day demo in Paris. The prefecture had released a document with a very short route for the demo and many people tweeted that the route is a trap. So yes we were a little bit nervous about how things would develope.

Before the demo started there was a street party at Place de la Bastille, the square where the demo would start a few hours later. We were there early, about two and a half hours before the start of the demo. We scouted police activities around the square and noticed the cops kept distance.

More and more people came to Bastille, first people started to change clothes and in the last 30 minutes before the demo started the black bloc had grown to about 2000 people. But many other people were also masked, even some of the CGT union members.

The demo started marching slowly, the Black Bloc was at the front og the demo. We crossed a bridge over La Seine and at the other side of the bridge cops were monitoring the situation, the Black Bloc stopped and monitored the cops. This situation went on for about 15 minutes and than the first sounbds of broken glass of advertising billboards and a few fire crackers. 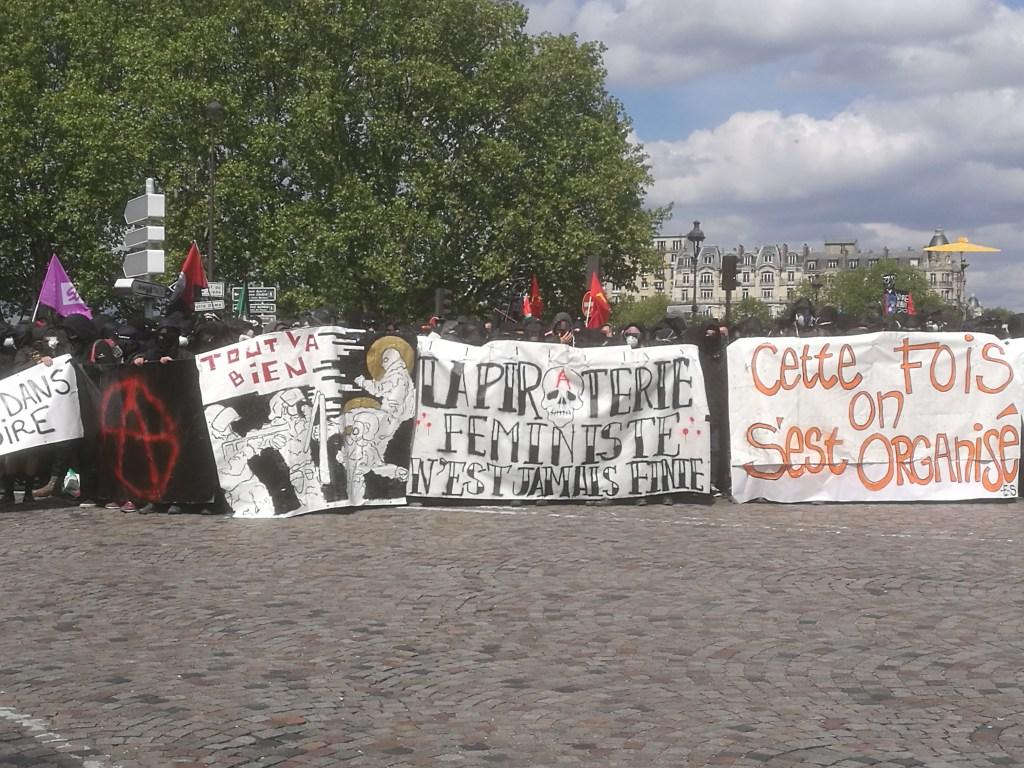 <figcaption>Image: After the demo crossed a bridge over La Seine, the demo was standing still for about 15 minutes.</figcaption></figure>

The demo started to march again and after about 200 meters a McDonalds branch was attacked. A digger was set on fire and a few molotov cocktails were thrown into McDonalds. The Black Bloc shielded the attack with banners, so it was difficult for press camera teams and photographers to film and photograph the attackers. Some managed to take pictures of the attackers (who were of course masked) but most of the media were not able to do that. Which was good. We never even try and work a lot with audio recordings in situations like these, because we want to cover the acrions but not bring people in danger (you can here our audio recordings in the video below). 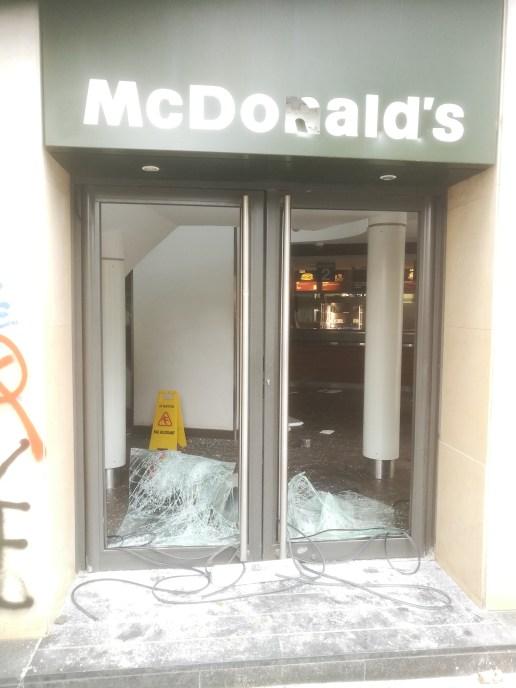 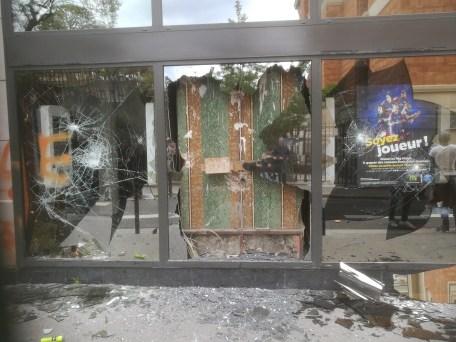 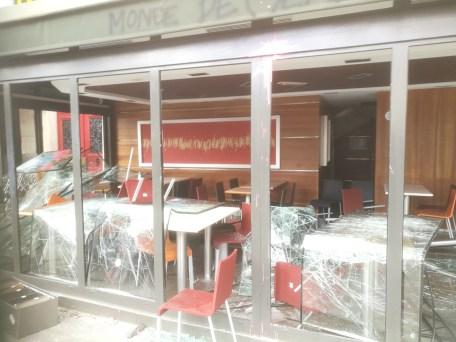 It became clear that if there was a trap, the demo would not wait and march into the trap. The rage against symbols of the capitalist order was set free immediately. A Renault car dealer was also attacked and set on fire. Not just the car on the image below.

The cops came to the scene, first stones and tear gas grenades were flying. Fences were brought to the street to buy some time. The demo returned to the bridge and a line of vans with riot cops were standing at the other side of the bridge. The cops that were standing now had people in front and behind them because large parts of the huge demo didn’t cross the bridge yet, the cops had asked the unions to not cross the bridge but go straight. That was a tactical mistake because now the cops at the beginning of the bridge were more or less surrounded. Stones and molotovs were flying, more tear gas.

During the running battles that unfolded the cops managed to split up the Blavk Bloc. It was the next tactical mistake by the cops because now 2 big groups went in different directions and the cops lost control for a while. Man banks, luxury shops and real estate companies were attacked. A few cars were burning. 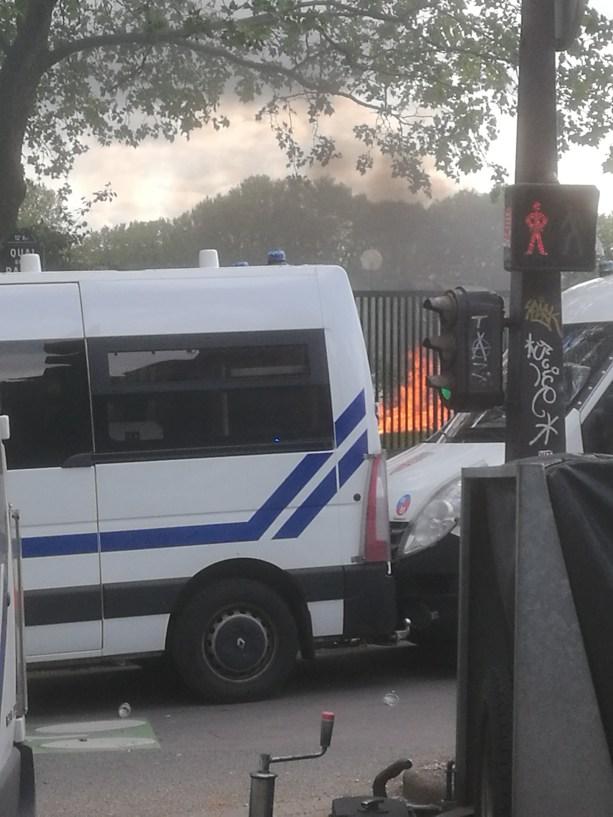 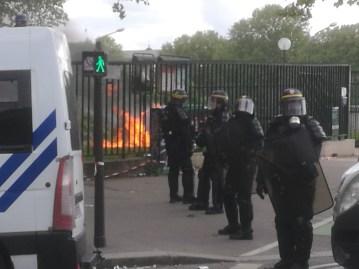 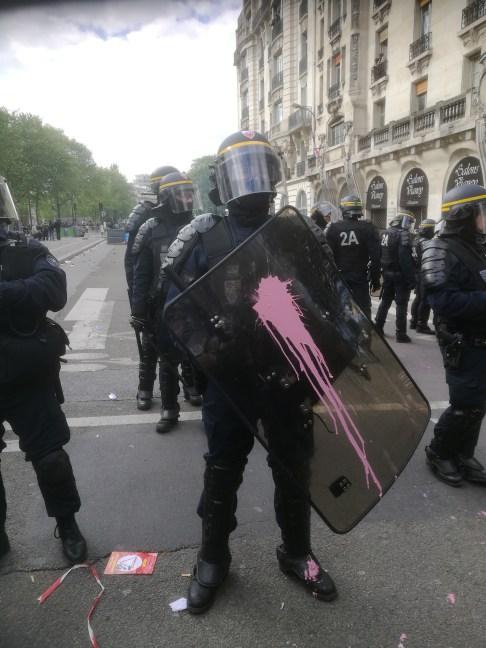 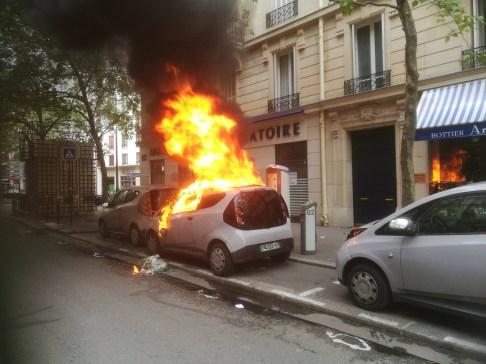 The clashes continued for hours but we had to stop our coverage at one point after we lost one member of our team. We were happy after we found him again, we were all ok. At about 06:30pm we went to the Boulevard Richard-Lenoir, a side street of the Place de la Bastille. People were talking with each other, chilling mood. Suddenly riot cops showed up and started to make trouble. The crowd was growing and started chanting “The whole world hates the police”. The cops started to get nervous, there weren’t many cops and soon firsat objects were flying. The cops answered with tear gas and had to retreat a few meters, again and again. In the end the had to run into a side street of the Boulevard Richard Lenoir. Many people went to the Quartier Latin and clashes went on into the night hours in several neighbourhoods.

We returned from the French territory. On Saturday we will report from the demo in solidarity with Afrin and Rojava and against arms manufacturer Rhein Metall in Düsseldorf, Germany. Later this year we plan to return to France, Greece and other territiores to produce independent on the ground reporting. But we need your support to cover at least some of our expenses (Travel costs, sim cards etc). Here is how you can support our work: