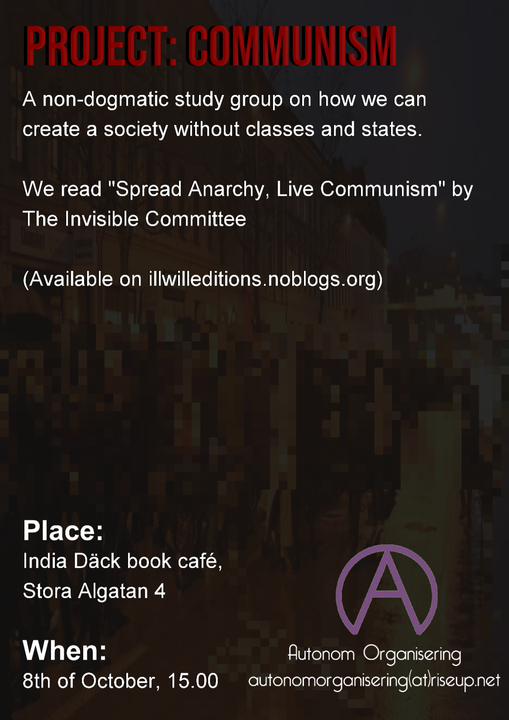 Why insist on using the word communism for our utopia? Communism is a word so associated by both its critics and some of its more bizarre supporters with Stalinist terror and mass murder that today it is almost impossible to use without being accused of wanting to repeat the horrors of last century. But communism is a concept which no matter how hard the ruling classes attempt to suppress it, constantly reappears and which states in the most simple way the most important goal of our movement: total abolition of the state and class system.

So we insist on the term because it is important, because we fight all those people who attempt to drag it through the mud or turn it into a strange, sad repetition of the bloody tragedies of the Soviet Union, to rescue it, to restate it for our world today. We are in a global situation of cutting edge technology with the Internet, industrial 3d-printing and automation alongside unprecedented mass poverty and ongoing ecological disaster. In this situation communism has both critical lessons for our time even as the concept itself must be renewed to this situation.
Communism, verb: "the real movement which abolishes the present state of things"

We quote Marx here, as always, because he is useful, not because of some strange, dogmatic adherence to beard-wearing men. Our aim is to see how communism appears today as a real movement, in the small cracks in everyday shopfloor resistance and in informal networks around the globe as well as in the riot and the mass revolt. Communism in this sense is always-present, always about to erupt, always in a process of becoming and always in a process of struggle.

Project: Communism is a study group and a think tank, a space for learning, discussing, thinking with and around the idea of creating a communist society. It is initiated by Autonom Organisering, but is open to all who share our aims whatever they call themselves. It is open to different modes of engagements: talks, movies, podcasts, lectures, discussions, engagement with art, workshops or whatever else. Project: Communism is about engaging with contemporary thinkers on communism, though this can also include critical readings of right-wing economists, "non-political" tech-dudes or bosses.

Join us for our first event in Lund the 8th of October at 15.00 where we read the strange and provocative "Spread Anarchy, Live Communism" by the Invisible Committee: https://illwilleditions.noblogs.org/files/2015/09/...
We chose this text because it in many ways speaks directly to the theme of this study group: how we can reformulate communist for a modern world? How do we turn communist thought once more into an insurrectionary practice and theory? How do we fashion new communist dreams beyond the political spectacles that come and go and which constantly put us on the defensive? We will carefully read the text together to attempt to sort out its provocations, frustrating passages and brilliance. It is helpful if you read beforehand, but not completely necessary. It is a starting point for discussion, not holy scripture, after all.