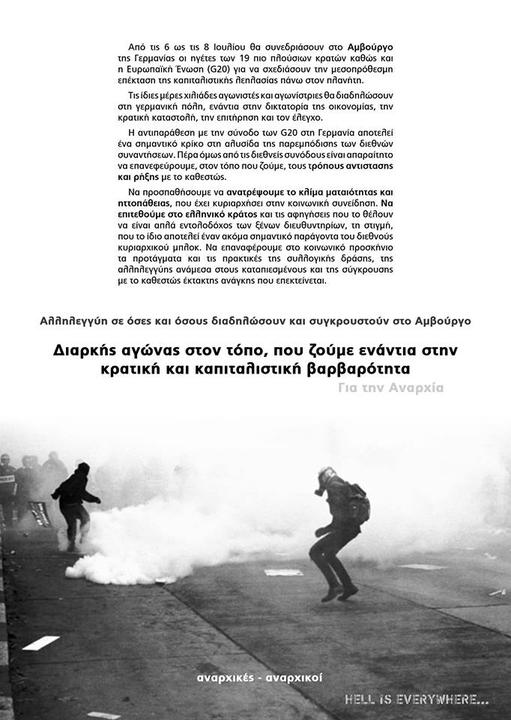 Poster put up in several neighborhoods in Athens, Greece, a week before the demonstrations in Hamburg for “welcoming” the G20.

Regarding the G20 summit in Hamburg

Poster put up in several neighborhoods in Athens, Greece, a week before the demonstrations in Hamburg for “welcoming” the G20.

In the period 6-8 July, the leaders of the 19 wealthiest countries of the world and the EU will meet in Hamburg, Germany to plan the medium term extension of the capitalist exploitation of the planet. During the same days, thousands of activists will demonstrate in the German city against economy’s dictatorship, state repression, surveillance and control.

This confrontation with the G20 summit in Germany constitutes another important ring in the long chain of obstruction of these international summits. Beyond these international summits, it is important to reinvent ways of resistance and rupture with the regime, in the geographical places we actually live in. We have to overthrow the feeling of vanity and defeatism that has dominated social consciousness. We have to attack the Greek state and the narratives that describe it as the proxy of international institutions, while the Greek state constitutes another important actor of the international hegemonic block. We have to bring back in the social domain the ideas and the practices of collective action, solidarity amongst the exploited and the confrontation with the state of exception that expands.

Solidarity with all those who will join the demonstrations and riots in Hamburg.

Continuous fight in the place where we live against state and capitalist barbarism.