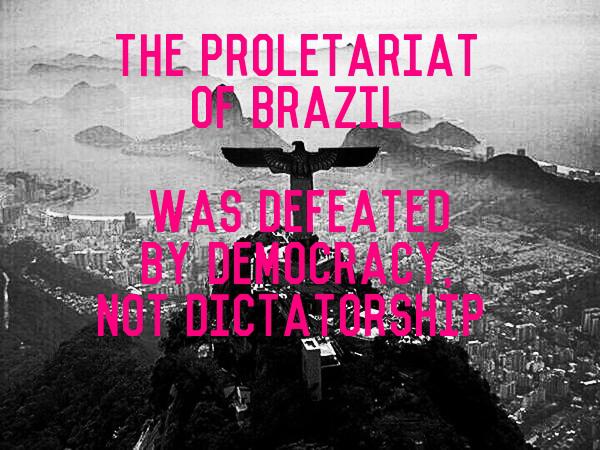 “The proletariat of Brazil was defeated by democracy, not dictatorship.”

The following is analysis from a Chilean comrade. While we don't agree with the final statements, we feel the analysis in this is rather illuminating for this moment. After our English translation follows the original Spanish.</pre>

If Bolsonaro won the elections it is because before his arrival the three previous successive governments of the PT [Brazilian Worker’s Party] have made it their task to squash any last vestige of the the Brazilian working-class’ own power and combativeness. Just as in 1970 when Allende started his mandate to guarantee to the Chilean bourgeoisie that their interests would not be threatened, so did Lula da Silva begin to govern in 2003 promising to businessmen and international bankers that none of their interests would run any risk in Brazil.

In effect, Lula governed to guarantee the payment of public debt, reassuring Capital a minimum of fiscal stability that would allow secure investment. None of the PT governments changed anything about the conditions of social exploitation or capitalist accumulation in Brazil. On the contrary, these governments supported a “wide national negotiation” destined to guarantee that capitalist exploitation would continue without any delay.

To this end, for the duration of the three periods of their governance PT co-opted and put under its control the majority of union and social leadership, transforming populist leaders into ministers, market assessors and investment & pensions administrators. Simultaneously, in order to maintain their base of support, the PT put itself under control of the most reactionary forces represented by agrarian capital, national & international industry entrepreneurs, the financial system and evangelical theocracy.

While governing for the landlords of Brazil, the PT managed to anesthetize social discontent with a calculated combination of social programs and repressive terror. When Lula agreed to lead the occupation mission of Haiti in 2004, he demonstrated to the United States that Brazil was a reliable ally to democratically crush social protest on the [American] continent. By bringing the Brazilian army to the slums of Haiti, he provided the troops with an experimental laboratory to later intervene in the favelas of Río de Janeiro, just as they did during the massive popular upheavals against the World Cup in 2014.

During the PT governments the production of food in Brazil declined by more than 35%, with the consequent increases of prices for the working-class due to the facilities given to the agricultural multinationals to introduce monoculture farming. 200 thousand peasants were displaced while 4 million lost their lands at the hands of large agribusiness. It was under the PT governments, and not under fascist governments, that the deforestation of the Amazon reached the “point of no return.”

It was the government of Dilma Rousseff, and not a fascist one, that reclassified roadblocks and land occupations as terrorist crimes. It was under the progressive governments, and not under fascism, that the commandos of death sowed terror among the most dispossessed of the dispossessed of the great cities of Brazil. It was under social-democratic, and not right-wing, governments that Brazilian prisons broke the world records of overcrowding and degradation of prisoner’s “life” conditions. It was under those leftists governments that the working-class and the oppressed of Brazil knew the lowest threshold of humiliation and shame. The proletariat of Brazil was defeated by democracy, not dictatorship.

Of course this is nothing new. Mussolini rose to power when the Italian proletariat had already been defeated by electoral commitments of the “popular and workers parties.” Hitler was appointed as chancellor by President Hindenburg, who had received support of the Socialists who saw in him a bulwark of democracy against Nazism. In 1973 Allende, instead of putting the representatives of the workers in key ministries, he placed the military, while the parties of the UP [Popular Unity] voted for the Law for Arms Control to disarm the working-class and deliver it to the Pinochet supporters. Fifteen years later it was the Military Junta that organized the democratic transition, fulfilling to the letter the doctrine formulated by Jaime Guzmán, who was at the same time the most democratic of the fascists and the most fascist of the democrats.

Like all fascists, Bolsonaro has simply come to bring to order business after progressive democracy has taken the Brazilian proletariat out of the game, reducing it to nothing.

Keep this in mind when you start to complain about the “arrival of fascism.” These laments are already too late. They should have been come panicked and outraged when the social democratic left disarmed the proletariat, manipulated them and anesthetized them with lies. These frightened complaints heard all over are pathetic. It only shows that those who moan have been sleeping, living in a fantasy, refusing to see the blood and shit rising under their noses, sinking little by little to the beat of electoralism and samba drummers.

In reality the arrival of fascism is never as bad as it may seem at first glance. At the very least it offers an opportunity to remove all illusions, mature and work to make things better from here on out.