This week there was another NoG20 related raid in Germany. On January 23 about 50 masked cops raided an apartment in Magdeburg, Germany. Today there will be a demonstration against repression in Magdeburg. The United We Stand campaign against NoG20 repression is not only calling for transnational days of action from from January 28th to February 4th, but also started to mobilize for a demonstration in Hamburg. This demo will take place on March 17, 2018, 02:00pm (14:00), Gaensemarkt, Hamburg, Germany. 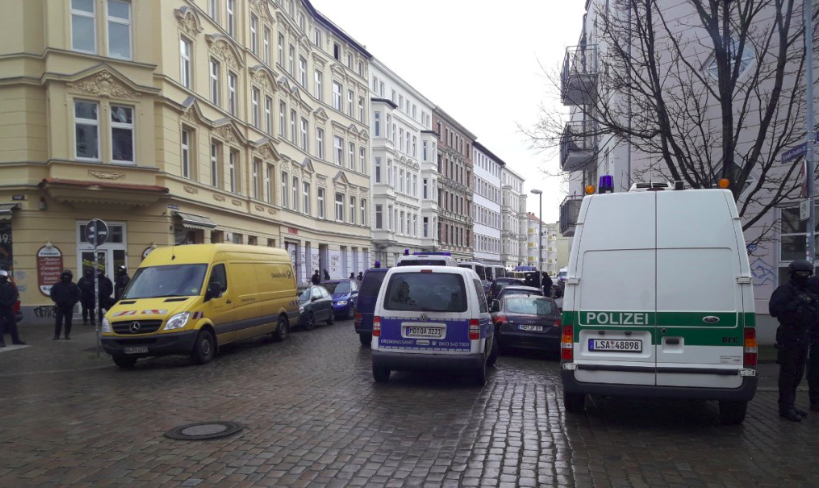 Image: Cops in front of the Info shop on January 23 in Magdeburg. An apartment in the same building was raided.

The raid in Magdeburg came after the cops arrested one person at the Gotheanlage, in the Magdeburg Stadtfeld/Ost dictrict. More than 50 cops, many of them masked, and a helicopter carried out the raid in one of the apartments in the Alexander Puschkinstraße 20 in Magdeburg. The apartment was raided because somebody allegedly throw a firecracker during the NoG20 protests in Hamburg. The state propaganda machine fantasized that the apartment was raided because of an attack with explosives against a police station in Magdeburg in July 2017. The apartment is located in a building with an info-shop and part of an alternative living project. Tonight (January 26) there will be a demonstration in Magdeburg. People will start to gather at 06:00pm under the slogan “Repel the attacks of the police and the state!”. Meeting point is in front of the Infoladen (Info Shop) at the Alexander Puschkinstraße 20 in Magdeburg, Germany.

Call for the demonstration against NoG20 repression & the formation of Authoritarianism on March 17, 2018 in Hamburg


In the summer of 2017 we came together by the thousands in Hamburg and protested against the G20 summit. Not the official orchestration of the summit, but the protests against the summit dominated the images. Our diversity and determination managed to cumber the propaganda eventin July. That was also successful because differing groups and initiatives worked together on a common goal.

We want to set a solidary sign against repression around the “day for political prisoners”. With the demonstration we will show that the calculations of criminalization, intimidation and division by the state will fail.

For us the summit days were not just moments to learn to know each other and succesful resistance. but also a consequent aggravation of state repression. Before and during the summit the police acted completely detached with large-scale ban zones for demonstrations, bans for camps and violent attacks. Still the repression continues: long pre-trial imprisonment, raids and public calls for denunciation.

In the setting of the current worldwide authoritarian formation by states and societies, a a shift to the right and a further militarization of the police also takes place in Germany. In this context we have to regard the decided aggravation of the so-called “resistance” and “breach of public peace” paragraph by German parliament in May 2017. With the G20 summit that took place a few months later, they wanted to send the message; Who leaves the protest framework which is authorized by the state, can count on drastic punishment.

But the convictions to high prison sentences are not only the result of the aggravation of these paragraphs. In many verdicts with a high penalty the goal of the judiciary is to deterrent refractory behaviour of others.

The various repressive measures in the past months showed that the enemy image of politicians and the institutions of repression is on the left side. They try to stagger us in fear as an antagonistic movement. In a fear that should prevent us to organize ourselves and to resist against the ruling conditions. Repression against leftwing movements has a tradition in Germany. For example the ban against the PKK has it’s 25th anniversary this year. Because of this ban activists are being imprisoned again and again on the basis of §129b.

The upgrade of the modern security state is also a reaction on the worldwide culmination of social conflicts. Fanned because of the forced opening of less developed markets by the leading industrial states more and more people are forced to flee, which often ends deadly, because of escalating distribution conflicts and wars.

But inside the industrial nations the inequality also is getting worse. Capitalism is no longer willing to hold up a minimal share in profits for people depending on wages. People who are not useful for the economical system are, when they get anything at all, getting fobbed with alms. The social components of the civil state are rather more replaced by the guiding idea of an obviously authoritarian formation. The content of this authoritarian formation are willingly accepted and internalized by large parts of society

Let us not be intimidated

We are not coming to complain. Because wherever the ruling conditons are questioned, the answer will be state repression. However we will continue to fight in many different ways until our comrades will be with us on the streets again.

Our goal is a solidary, self-determined, stateless and gender liberated society without exploitation and oppression. Locally and globally, solidary and collectivly we want to resist against the horrible conditions.

The aspiration for another life has activated us against the G20 as a movement in all its breadth. We didn’t let them to dictate us the forms of protests but chosen ourselves. In this context; Let us thwart state repression by neither letting them to divide us, nor let them isolate us.

Let us set a sign for a solidary perspective, let’s organize ourselves and set a mark against repression together; wether in the courtroom, in contact with the prisoners and convicted, by organizing (solidarity) events or on the streets.

It struck some of us, but they meant us all!

Freedom for all G20 prisoners!

Freedom for all prisoners!