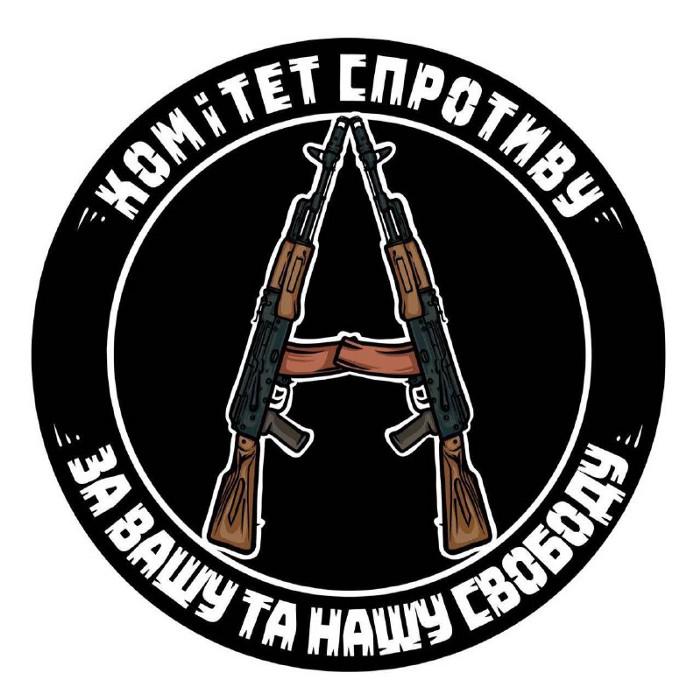 What does Putin’s regime and imperialism bring with them? We saw it in the grim example of Donbass and Crimea. We saw it in the bloody suppression of the peoples of Belarus and Kazakhstan, the destruction of protest movements in Russia, bombardment of Syrian cities. It appeared to be not enough for Putin. On February 24, 2022 he started full-scale war against Ukraine. Today the epicenter of the resistance against enslavement is here. The struggle of Ukrainians gives hope for liberation to everyone oppressed by Putinism.

For centuries the territory of modern Ukraine has lain on the frontier of the interests of imperial ambition and aggression. People of free spirit have flocked here away from the despotism. Among those people were cossacks and opryshki insurgents. Heroic makhnovists fought here for the freedom of the people against all rulers.

Today’s war in Ukraine is the continuation of the struggle for peoples’ freedom from all authoritarianism. Residents of Ukraine as well as people from many other countries fight together for the liberties and rights which were gained by the ages of popular struggle and the effort of revolutionaries. And even though today the Ukrainian state is on stage, the resistance against the invasion is being waged by the mass popular movement.

Resistance Committee is the space for dialogue and coordination of anarchist, libertarian and anti-authoritarian initiatives.

We believe that Ukraine and all Eastern Europe should be free from dictatorship. Freedom, solidarity and equality should become the main principles of the social organization in the region.

Our task: to unite efforts of fighters against authoritarianism for the sake of effective struggle for our ideals and values. We aspire to influence the future of Ukraine and the whole region, to protect the freedoms which already exist and to contribute to their extension.

“For our freedom and yours!” — we are the enemies of imperial rule, which is present now in Ukraine by the brutal Putinist army. We fight for the sake of Ukrainian society, against destruction and death which Russian occupiers make for it. If the Ukrainian state today participate in this struggle it doesn’t mean that we became its supporters.

We don’t consider the peoples of Russia and Belarus our enemies. We call all free-minded Russians and Belarusians to fight against the dictatorship with us.

We understand: until the nest of tyranny in Moscow is removed, the whole region will constantly face harassment against its freedom. Every local tyrant, suppressing his rebellious people, will be assisted by the “tsar of Moscow”. We want to see ourselves and our neighbours free. It means that we should put an end to Putin’s regime.

Justice — we stand against all forms of oppression among humans, domination-submission relations, social inequality. All the oppressors must be defeated. Tyranny should be replaced by free and equal cooperation by everyone in society. On this principle we base our current activity.

There can be no justice until the imbalance of power and wealth in society is overcome.

Justice is unimaginable for us without gender equality, care for the environment and overcoming all kinds of discrimination.

Solidarity — we give priority to cooperation before competition. Closeness and collaboration before egoism and atomisation. However we don’t reject the originality and uniqueness of every individual. The freedom of every human being lives in the freedom of others. Nobody is free until everyone is free.

Today in Ukraine anti-authoritarians participate actively in the main spheres of resistance against the aggression:

1. In the theatre of war;
2. In the sphere of civil volunteering;
3. In Media-activities.

The mission of the Resistance Committee is to assure the communication and coordination of different groups and individuals actively involved in these processes.

What can be done now apart from fighting the occupiers?

The shape Ukrainian society will take is very important to us. We have outlined changes which we want to implement:

1. To cancel the unjust external debt of Ukraine: this is the noose around the country’s neck held by international financial institutions and wealthy states. Inhabitants of other countries also benefit from Ukrainians’ fight against Putin’s regime. Cancel of the external debt — would become one of the examples of solidarity.

2. Implementation of credit amnesty for Ukrainian citizens with low and medium income. The debt load of the population is the result of shortcomings of the economic system. Inhabitants of the resisting country should be freed from this burden.

3. To establish the system of assemblies — institutions of the grassroots self-management. They should become common practice. Assemblies should be formed both on a local and professional (trade-unions) basis. The development of the trade-unions means that workers create tools for the collective protection of their economic interests.

4. To give more tools and resources to the local communities (hromada’s). In particular — to extend the practice of organizing local self-defence which already showed its relevance in wartime.

5. To grant Ukrainian citizenship or a permanent residence permit as well as full social services, medical insurance and accommodation to all foreigners fighting the occupiers.

6. To make accommodation accessible: to create adequate system of social/municipal rent, accessible cheap credit for real estate purchase, opportunity for young families and other vulnerable groups to get a flat for free.

9. Social support/subsidies for the people with low income: major discount or free access to basic goods and needs.

10. To develop effective ways for the protection of Women’s freedom. Most notably in context of violence. We believe it is necessary to create autonomous female structures in all municipal bodies of the country independently from state institutions. It is also necessary to form female defence forces, suppressing violence against women. Women’s autonomy and female units should be formed inside the regular army as well. Gender-motivated violence from the side of the occupiers as well as from the side of all other criminals should be stopped!

11. Development of ecological consciousness and responsibility. The implementation of ecological human-proportionate technologies, configured for the needs of local communities.

12. Common access to the means of self-defence as a condition of freedom and opportunity to protect oneself from aggressors. Simplification of access to arms. Integration of education and military industry development based on latest technologies. The development of educational programs able to teach specialists who will strengthen the country’s capacity for defence. Opportunity to gain military skills in the ranks of Territorial Defence, minimization of bureaucracy, extension of the principles of horizontal decision-making and transition to the normal work week. Implementation of the system of nutritious food for vegans in the military service.

This manifesto is by no means final. We are ready to complement and correct it over the course of our practice.

Read it in Ukrainian, Belarusian, Russian.