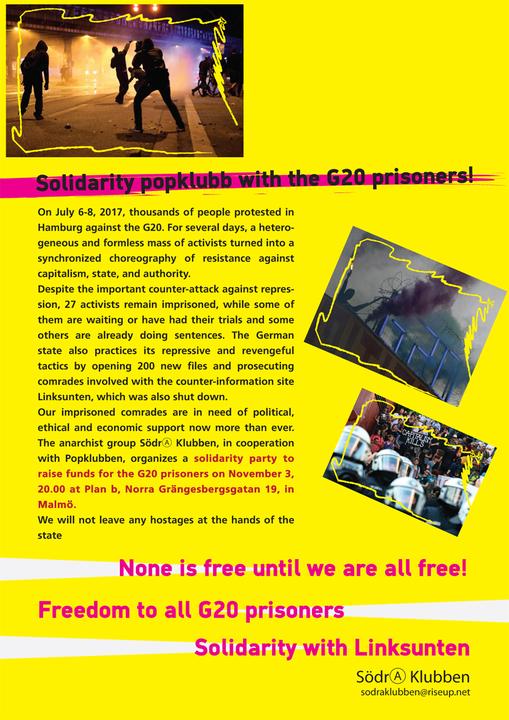 On July 6-8, 2017, thousands of people protested in Hamburg against the international summit of the 19 most powerful states and the EU (the so-called G20). This, otherwise “informal”, summit essentially defines the most important socioeconomic decisions and alliances on the planet. Under the motto “Hamburg G20: welcome to Hell”, for four days the city of Hamburg experienced an unprecedented wave of protests against the world’s powerful. A heterogeneous and formless mass of activists that turned into a synchronized choreography of resistance against capitalism, state, and authority. Activists effectively confronted the police state that the German government attempted to impose in the city. We saw in front of our eyes, how one of the world’s most well-oiled suppressive apparatus was totally disorganized by direct action and decentralized attacks in the broader area of St. Pauli. The events of Hamburg create optimism about the activist future and a world without oppression.

However and despite the important counter-attack against repression, 265 comrades were detained (144 of them were arrested). Almost three months after the July events, 27 activists remain imprisoned, while some of them are waiting or have had their trials and some others are already doing sentences. At the same time, the German state practices its repressive and revengeful tactics by opening 200 new files and prosecuting comrades involved with the counter-information site Linksunten, which was also shut down. So much for freedom of speech these liberals!

Our imprisoned comrades are in need of political, ethical and economic support now more than ever. The anarchist group SödrⒶ Klubben, in cooperation with Popklubben, organizes a solidarity party to raise funds for the G20 prisoners on November 3, 20.00 at Plan b, Norra Grängesbergsgatan 19, in Malmö.

Freedom to all G20 prisoners

None is free until we are all free!