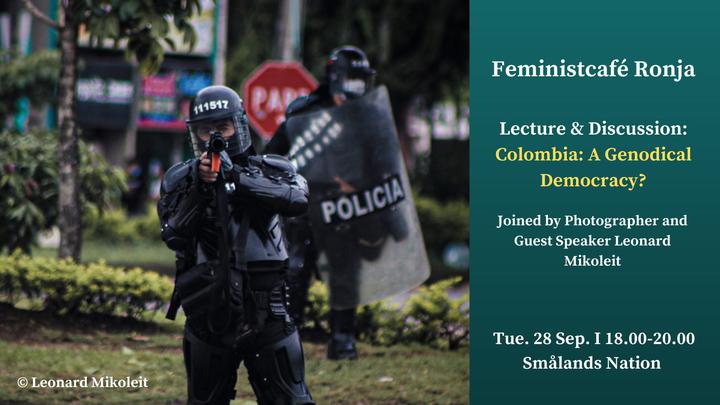 What began as a single day of protest in Colombia on the 28th of April, 2021, evolved into weeks of demonstrations, blockades and police violence.

Organised initially in response to a new tax reform introduced by President Iván Duque, the protests evolved to include criticism of the appalling treatment of indigenous groups, poor education and corruption, among many other topics.

Attend Feminist Café Ronja at Smålands on the 28th of September from 19:00-21:00, to learn about the nation’s history, the lead up to the protests, what happened during the course of the disruption and what might come next. Speakers will be Philippa Scholz and Tomás Castro.

Joined by guest speaker and photographer Leonard Mikoleit, we will also hear from his first-hand experience of his photojournalism during the protests. After taking potentially incriminating images, he was threatened by police forces at his home and felt forced to leave Colombia. Now residing in Berlin, he is involved in activism and awareness-raising.

There will be the opportunity to ask him questions and discuss the presentation in the second half of the event!

The event is free and open for everyone! This is a safe sharing space, so be mindful and respectful.

*Feministcafé Ronja - and Smålands Nation - is a feminist, anti-racist, queer friendly space. This means that sexism, racism, homophobia, transphobia, ableism and discriminations of all kinds are not welcome here.