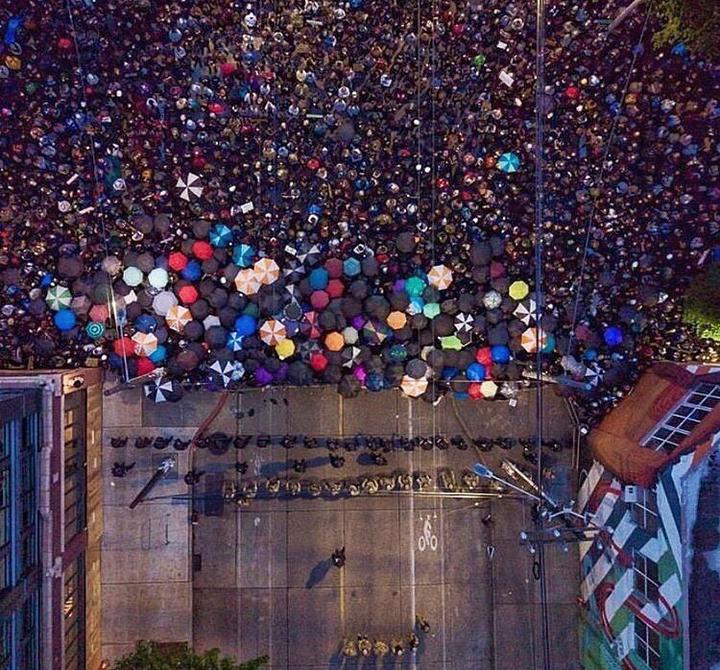 By Mirasol. This article is related to an other, published on FEVER, here.

The tremendous social uprising in the USA, the way it is playing out in the rest of the world, encouraged us to publish this text in haste. The events, as often happens, are unfolding faster and stronger than we expected. So much the better!
In this text, we ask a simple question: how can we win? The first wave of uprising that spread around the world in 2018-2019 was the premise of a new revolutionary cycle. Today, this cycle has reopened, right in the belly of world capitalism: the USA.
If the revolution takes a direction dictated by the legalistic, democratic fringe of the movement, or even the so-called “radical” fringe, if what is at stake is a change in the constitution, reform of the state, or more democratic waffling, defeat is guaranteed.

The very practices of the movement confirm this. Here is the content of the hegemony of the proletarians over their movement: attack, take and share. Putting an end to pompous declarations and starting to change life, here and now.

Seizing property, housing, everything. Sharing food and organizing this redistribution on the basis of the population’s needs. Attacking the state.

In short, communist measures. Revolutionary proletarians will find the police confronting them. But they will also find community leaders. They’ll find organizers, those who call for negotiation. Those who still believe that they can be “taken into account”.

From Kim Kardashian to Jeff Bezos, the liberal bourgeoisie, frightened by the social conflagration and rage, promises black people they’ll be given consideration. They promise an end to racism and they lie. No representation, no affirmative action, no police reform is enough. Only force can defeat force. American insurgents know it: to end police racism, they must end the police. The magnificent movement that is taking off in the United States cannot be limited to the conviction of a few cops, to a few crumbs and promises of reform.

Promises of a slice of the American dream, of integration in the capitalist world, the carrot that makes us believe that we too can get rich, is rightly denounced as a racist nightmare.

Today, what we’re witnessing is the awakening of our class.

Time and space of the insurrection.

How long does an insurrection last? That’s a big question. As we wrote earlier, an insurrection that lasts becomes a revolution. But that becoming itself is conditioned by a prior victory. What matters to us, therefore, is the window of opportunity, the moment when, in full flight, an insurrection can win or die.
This is the time during which the insurrectional movement is in progress and can take the state by surprise with its initiatives, or grow and expand. We will not rush to give precise figures, as such a measure also depends on the disorganization of the State. Indeed, what is decisive is when the initiative changes.
Can there be several insurgent episodes within a few months of each other? We don’t know. For now, it may be best to speak in terms of weeks, or even days.
In an attempt to paint a tentative picture of the insurgent moment: an indeterminate time is the front. It is composed of micro-crises, local or latent conflicts, which trace the weak signals of the rise of anger. When this anger explodes, it modifies temporality. It produces a social event, which generalizes very quickly, centralizes around it the attention, the social time.
Everybody’s talking about it. Practices work by example, and we will try to reproduce and surpass what we see happening elsewhere. The model is one of trial and error, and what works is reproduced. Hence the need for rapid information sharing. Everything then moves very quickly, until the confrontation reaches a certain point, when power itself is called into question. At that point, everything can turn upside down. For the moment we have only seen the collapse of the movements at this precise moment, and their political-military, even social, defeats. Military defeat through the victory of repression. Political defeat, which will see the movement rush into the sidetrack of constituent assemblies, borderline forms of integration into the State.
And finally social defeat, when the social initiative leaves the movement to be confiscated by trade union bureaucracies. The latter then call for a general strike, a strike controlled from one end to the other by them, or we are summoned, without leaving us any initiative autonomy? Thus, a takeover, a cooptation.
Next, on what space does an insurrection unfold? For the time being, the face-to-face with the State is within the framework of the national territory in which that State is deployed. There is no indication, however, that this remains so.
Think in particular of the evolution of the current crisis, one of the major characteristics of which is global simultaneity. Within the territory, there is also a need to reflect on the particular areas where the movement is unfolding, and how these areas are evolving as the movement takes the shape of the conflict with the State? For example, often one starts by deploying near one’s home, then focusing on blocking more strategic targets, before finally striking the head.