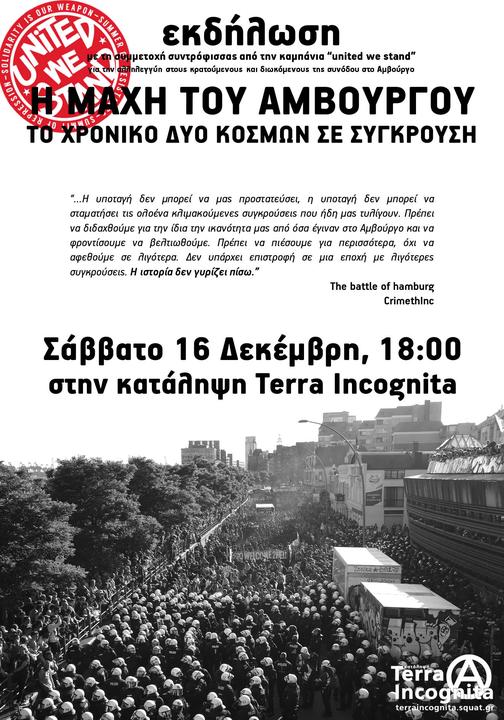 G20 - From Malmö to Thessaloniki: solidarity is our weapon

SödrⒶ Klubben (SK) is an anarchist collective with members of different ideological backgrounds based in Malmö, Sweden. Prior to the G20 protests in Hamburg a Nordic revolutionary network took form, which SK is part of. The network, called Autonomous Nordic Revolutionary Alliance (ARNA), consists of anti-capitalist, feminist and antifascist groups from the Nordic countries. ARNA was formed in anticipation of the G20-meeting in Hamburg, however the ambition moved far beyond this: ARNA hopes to create a lasting network for joint action, logistics and political discussion. Our internationalist ambition means that we move beyond borders in our activism to create a joint resistance against state, patriarchy and capitalism.

On 6-8 July 2017, members of SK, together with hundreds of people from all across the Nordic countries, drove in a caravan of "ARNA busses" but also individual cars to Hamburg to protest against the G20. Under the motto “Hamburg G20: welcome to Hell”, the city of Hamburg experienced an unprecedented wave of protests against the world’s powerful for four days. A heterogeneous and formless mass of activists turned into a synchronized choreography of resistance against capitalism, state, and authority. Activists effectively confronted the police state that the German government attempted to impose in the city. We experienced how one of the world’s most well-oiled suppressive apparatus was totally disorganized by direct action and decentralized attacks in Hamburg.

However and despite the important counter-attack against repression, 265 comrades were detained of which 144 of them were arrested. On December 5, German cops raided more than 20 buildings, among them two social centers, in several German states by order of the special investigation unit "Black Bloc", which is investigating the clashes during the G20 summit in Hamburg. Also, early after the G20 protests the German state practiced its repressive and revengeful tactics by opening 200 new files and prosecuting comrades involved with the counter-information site Linksunten, which was also shut down. Even in Sweden, the state imprisoned one of our comrades after the events in Hamburg and harassed several of us before the antifa demonstration in Gothenburg in September 2017. Agents of the Swedish security service SÄPO intruded in the lives and integrity of many of our comrades by exposing them to ridiculous questions about the upcoming antifa demo, spreading uncertainty and fear, hoping to repress our resistance against the nazis. They called/visited and harassed people that have been active in autonomous/anarchist groups, activists who have participated in social movements and social struggles, such as the events of Hamburg. Despite the different repressive tactics held by different states, we stand together united and grow stronger. Collective anti-hierachical activities de-activate fear and isolation.

Our imprisoned comrades are in need of political, ethical and economic support now more than ever. In November, our group organized a solidarity party with the G20 prisoners in Malmö. In the same manner, we salute and fully support the solidarity event organized by our comrades from the squat Terra Incognita in Thessaloniki and the Apatris newspaper in Athens. We are sending our warmest greetings to the event "The battle of Hamburg, the chronicle of two worlds in conflict". In our world, global solidarity and incessant resistance go beyond national borders and stand against obliviousness. The more interconnected, the more powerful we get. Although we cannot attend the event in person, we are there in spirit.

Freedom to all G20 prisoners and strength to all who have been under state surveillance the last months!

None is free until we are all free!