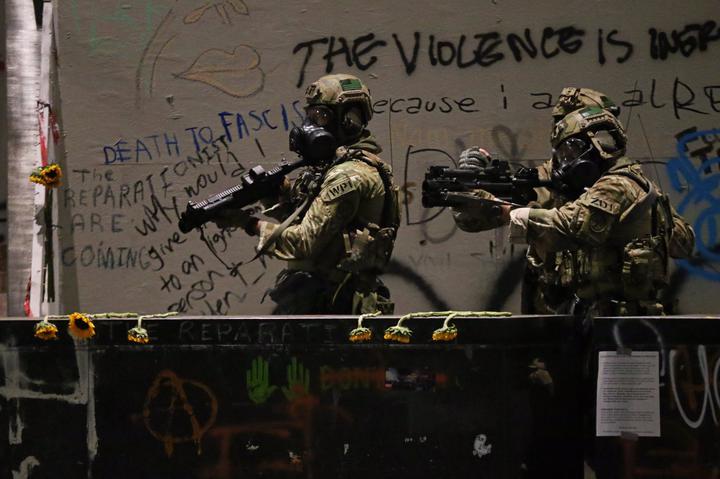 Since the end of May, demonstrators opposing police violence and white supremacy have thronged the streets of Portland, Oregon, clashing with law enforcement officers. Last week, aspiring autocrat Donald Trump escalated the situation by announcing that he would be sending federal agents around the country to assert his authority through acts of violence against protesters. The past few days have seen thousands sweep into the streets of Portland to defend those who were already protesting and demand the departure of Trump’s federal agents from their city.

Now participants in the movement in Portland are calling for solidarity actions starting this Saturday, on July 25. The following statement from several Portland organizations—including (Pop)ular (Mob)ilization, Portland Rising Tide, the Revolutionary Abolitionist Group, Colectivo X, and Symbiosis PDX—entreats everyone who has been inspired by the determination and endurance of demonstrators in that city to spread the struggle countrywide, just as Donald Trump hopes to deploy federal forces everywhere.

Please circulate this video and statement—and think about how you can prepare to fight against the escalation of state tyranny wherever you are.

Here is a list of solidarity events around the country.

From Portland to the World

We love that people are thinking about the ways they can support the people in this city, especially those who have been pressing hard in the streets for the past seven weeks in support of the struggle for Black lives and for freedom for all—and despite the brutally repressive tactics of police and federal forces. We want to accept your support—and we say the best way to support us is to take inspiration from Portland and bring this fight to where you are in any way you can.

Go as hard as you want, use every tool in the toolbox, and employ every tactic you can. Our fight is your fight and we want to share it with you. Our common struggle against fascism and against the police and federal officials defending white supremacy are intertwined. The movement is moving: solidarity is spreading and the bigger we get the faster we win.

We will stay in the streets until every institution in our society reflects the acknowledgement that BLACK LIVES MATTER—and we hope you will too.