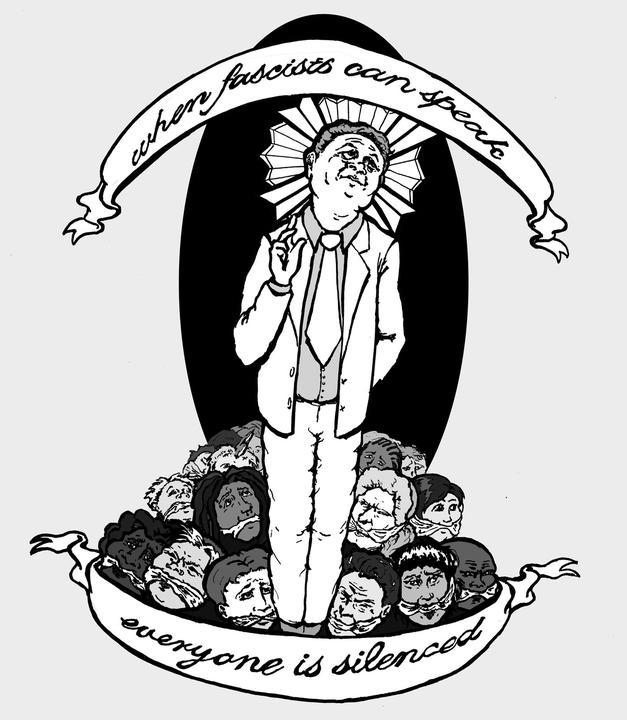 Stopping fascists from speaking makes you just as bad as them.

You could just as easily say that not stopping fascists from speaking makes you as bad as them, because it gives them the opportunity to organize to impose their agenda on the rest of us. If you care about freedom, don’t stand idly by while people mobilize to take it away.

Shouldn’t we just ignore them? They want attention, and if we give it to them we’re letting them win.

Actually, fascists usually don’t want to draw attention to their organizing; they do most of it in secret for fear that an outraged public will shut them down. They only organize public events to show potential recruits that they have power, and to try to legitimize their views as part of the political spectrum. By publicly opposing fascists, we make it clear to them—and more importantly, to anyone else interested in joining them—that they will not be able to consolidate power without a fight. Ignoring fascists only allows them to organize unhindered, and history shows that this can be very dangerous. Better we shut them down once and for all.

The best way to defeat fascism is to let them express their views so that everyone can see how ignorant they are. We can refute them more effectively with ideas than force.

People don’t become fascists because they find their ideas persuasive; they become fascists for the same reason others become police officers or politicians: to wield power over other people. It’s up to us to show that fascist organizing will not enable them to obtain this power, but will only result in public humiliation. That is the only way to cut off their source of potential recruits.

History has shown over and over that fascism is not defeated by ideas alone, but by popular self-defense. We’re told that if all ideas are debated openly, the best one will win out, but this fails to account for the reality of unequal power. Fascists can be very useful to those with power and privilege, who often supply them with copious resources; if they can secure more airtime and visibility for their ideas than we can, we would be fools to limit ourselves to that playing field. We can debate their ideas all day long, but if we don’t prevent them from building the capacity to make them reality, it won’t matter.

Neo-Nazis are irrelevant; institutionalized racism poses the real threat today, not the extremists at the fringe.

The bulk of racism takes place in subtle, everyday forms. But fascist visibility enables other right-wing groups to frame themselves as moderates, helping to legitimize the racist and xenophobic assumptions underlying their positions and the systems of power and privilege they defend. Taking a stand against fascists is an essential step toward discrediting the structures and values at the root of institutionalized racism.

Here and worldwide, fascists still terrorize and murder people because of racial, religious, and sexual difference. It’s both naïve and disrespectful to their victims to gloss over the past and present realities of fascist violence. Because fascists believe in acting directly to carry out their agenda rather than limiting themselves to the Rube Goldberg machine of representative democracy, they can be more dangerous proportionate to their numbers than other bigots. This makes it an especially high priority to deal with them swiftly.

Free speech means protecting everyone’s right to speak, including people you don’t agree with. How would you like it if you had an unpopular opinion and other people were trying to silence you?

We oppose fascists because of what they do, not what they say. We’re not opposed to free speech; we’re opposed to the fact that they advance an agenda of hate and terror. We have no power to censor them; thanks to the “neutrality” of the capitalist market, they continue to publish hate literature in print and the internet. But we will not let them come into our communities to build the power they need to enact their hatred.

The government and the police have never protected everyone’s free speech equally, and never will. It is in their self-interest to repress views and actions that challenge existing power inequalities. They will spend hundreds of thousands of taxpayers’ dollars on riot police, helicopters, and sharpshooters to defend a KKK rally, but if there’s an anarchist rally the same police will be there to stop it, not to protect it.

Anarchists don’t like being silenced by the state—but we don’t want the state to define and manage our freedom, either. Unlike the ACLU, whose supposed defense of “freedom” leads them to support the KKK and others like them, we support self-defense and self-determination above all. What’s the purpose of free speech, if not to foster a world free from oppression? Fascists oppose this vision; thus we oppose fascism by any means necessary.

If fascists don’t have a platform to express their views peacefully, it will drive them to increasingly violent means of expression.

Fascists are only attempting to express their views “peacefully” in order to lay the groundwork for violent activity. Because fascists require a veneer of social legitimacy to be able to carry out their program, giving them a platform to speak opens the door to their being able to do physical harm to people. Public speech promoting ideologies of hate, whether or not you consider it violent on its own, always complements and correlates with violent actions. By affiliating themselves with movements and ideologies based on oppression and genocide, fascists show their intention to carry on these legacies of violence—but only if they can develop a base of support.

Trying to suppress their voices will backfire by generating interest in them.

Resistance to fascism doesn’t increase interest in fascist views. If anything, liberals mobilizing to defend fascists on free speech grounds increases interest in their views by conferring legitimacy on them. This plays directly into their organizing goals, allowing them to drive a wedge between their opponents using free speech as a smokescreen. By tolerating racism, homophobia, anti-Semitism, and xenophobia, so-called free speech advocates are complicit in the acts of terror fascist organizing makes possible.

No one has the right to organize violence against our community. Likewise, we reject the “right” of the government and police—who have more in common with fascists than they do with us—to decide for us when fascists have crossed the line from expressing themselves into posing an immediate threat. We will not abdicate our freedom to judge when and how to defend ourselves.