On Wednesday the 13th of February 2019 it has been five years since the founding of the Antifascist network Varis in Finland. The five year celebrations were held in the following weekend in Helsinki, Jyväskylä and Tampere. At the end of 2013 a group of antifascists from several different cities started to meet and plan together the founding of a new antifascist network. This became the Varis network, groups of which were founded in Helsinki, Turku and Tampere. The network also set up a media group to start preparing a website for publishing information. After several months of preparation, Varis went public in the February of 2014:

In the last years we’ve had to read about the new coming of fascism around Europe. In Finland neonazis who admire violence have attacked, for example, Helsinki Pride, a book publishing event in a Jyväskylä library and against countless immigrants – sometimes stabbing their randomly selected victims to their back as they are fleeing for their lives. On the other hand, parliamentarily organized neofascists have systematically tried to underplay the crimes of neonazis, called for rapes of female members of parliament and restricting the rights of the labour movement. They have systematically spread hatred, racism and prejudice among people. The concerns people have are legitimate, but the answers fascists have for them are wrong and thoroughly rotten. It’s time to say NO, together!

This is why we’ve founded a Finland-wide network, which aims to destroy organized fascism and remove its breeding grounds in our society. Varis network consists of independent groups, which decide for themselves their goals and principles of action. All decision-making between the groups and within them happens on equal basis. 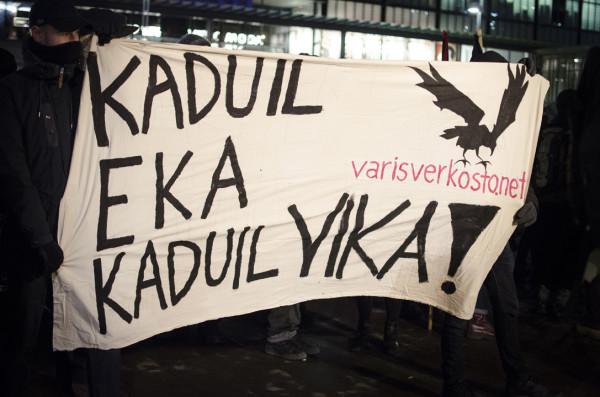 The first year was busy, as members of the network were searching for their form in different cities and tried a wide range of different methods. The Helsinki group went to the neighborhood of Myyrmäki in Vantaa to spread information about neonazis after nazis in the same neighborhood had been spreading their propaganda on the area and had assaulted a person who criticized them. Similarly to Finland, also in Sweden nazis committed several violent attacks, most infamously the ones in Kärrtorp and Malmö. In Tampere people participated in solidarity work for Swedish antifascists and maintained contacts with Jyväskylä. To show support with Swedish comrades the first feminist Take back the night demonstration of the 2010s was held in Turku and Helsinki. This tradition was continued on the following years on the International Womens’ Day. Five years later an antifascist movement has been created in Finland, which no longer has to seek for inspiration from other countries but activities are organized and developed independently based on the local political situation. 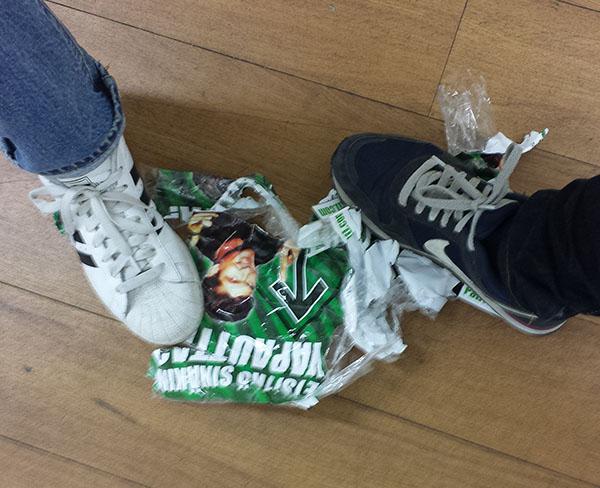 Cleaning the streets in Myyrmäki neighbourhood of Vantaa in 2014.

The first year of Varis passed by fast, partly because on the background of the activity was the antifascist action kicked off in the first years of the 2010s by individuals and informal groups, and because of the experiences gained there. The most visible fascist group at the start of the decade was the small Nordic Resistance Movement (NRM), which was then still known as the Finnish Resistance Movement (FRM.) NRM reached headlines constantly due to their violent methods, as the organization was often attacking leftist and liberal political actors. NRM’s violent methods were among the key reasons why more organized antifascist activity began to develop in Finland, as those who support freedom and equality found themselves having an immediate need for self-defence. Meanwhile however other fascist groups, much like antifascists, were searching for a new form, with the most long-lived Finnish fascist organization Suomen Sisu reactivating in 2013. The same year, partly by the membership of Sisu, a neofascist web magazine Sarastus (“Dawn”) was founded. Forms of fascism becoming more diverse eventually led to NRM abandoning acting alone and starting together with Sisu and Sarastus to organize the 612 demonstrations on the Finnish independence day.

This quiet gathering of ranks by the fascists however could not have been as damaging without the events of 2015. In the early summer a coalition of the right-populist Finns Party and of the conservatives and the Centre Party was chosen as the government of Finland, and by welcoming the Finns Party they also opened the gates to a parliamentary co-operation with the far right. The European “refugee crisis” which started in the autumn of 2015 started an unforeseen series of far-right demonstrations, loosely known as “Close the Borders” movement. Despite the antifascist activities of earlier years, there were no skills to deal with the situation as required, and in its second year of existence Varis was faced with serious challenges with continuing. In several cities, all the time and energy of many antifascists was spent organizing counter-events to Close the Borders demonstrations. Fortunately part of the actors in the extra-parliamentary movement was then actively participating in opposing the austerity measures of the government, especially in the Joukkovoima (“Mass Power”) popular movement against austerity and the student movement. Otherwise the justified anger towards austerity could’ve been targeted entirely against migrants as opposed to the government. 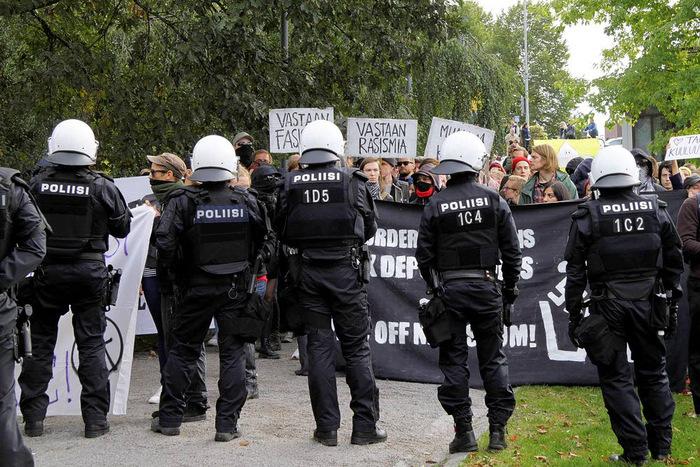 Antifascist counter-demonstration in Tampere 2.10.2015 Members of Varis Tampere organized the event “Tampere demands: Zero tolerance for racism!” together with other local antifascists.

After the demanding autumn of 2015, serious talks were had during early 2016 about the direction and continuity of action. Figuring out the direction was complicated by some founders of the network moving partly or altogether to other autonomous political activities or stepped aside due to career or family reasons. Many had been active antifascists for years before the founding of Varis. At the same time new people were joining the network, which brought new energy to the network and also partly changed the focus points for activities. Common goals were set which activities were supposed to meet to be meaningful. After the first couple of years it was clear that without criticism and self-criticism political action can’t develop. In retrospect we can say that it would’ve been good for us to engage in more criticism and self-criticism at both the local and at the network level. We will in the near future talk more of this, the near-past of antifascist action and many other things on our website in a (self) critical spirit. 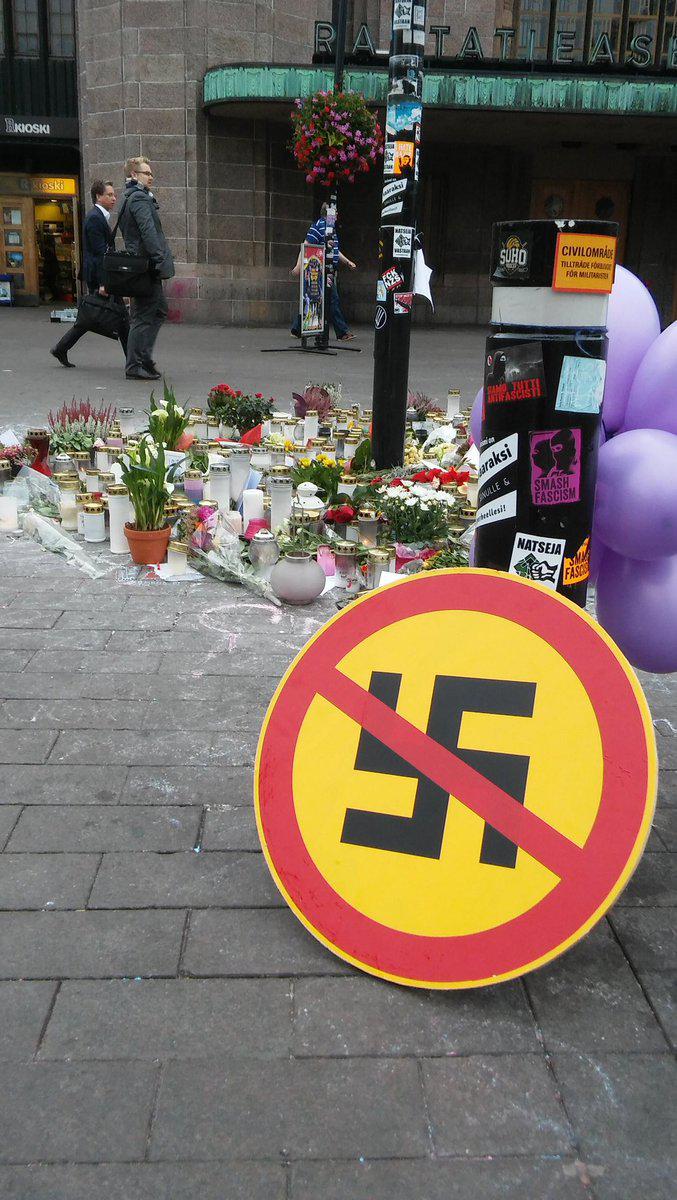 Near the end of 2016 all of Finland was shook, when a NRM active killed Jimi Karttunen in Helsinki. This was exactly what antifascists had been warning about for the entire decade. It was by no means the first time NRM was assaulting bystanders, but it was the first time resulting in a death. Following the tragedy, discussions were had within our network about how to act, as everyone saw the need for a broader societal pressure against nazis. This is why we gave our support for the antifascist “Peli poikki” (Game Over) demonstrations which gathered 20 000 people to the streets and a bit later we were involved in the founding of Helsinki ilman natseja (Helsinki Without Nazis) coalition, which for the first time on the Finnish independence day of 2016 organized the demonstration Helsinki ilman natseja which gathered 3000 people to the streets. These antifascist demonstrations on the independence day have become an antifascist tradition. At the same time antifascists have had a lot of discussions about great counter-mobilizations and how they relate to smaller, more direct and more local antifascist activity. 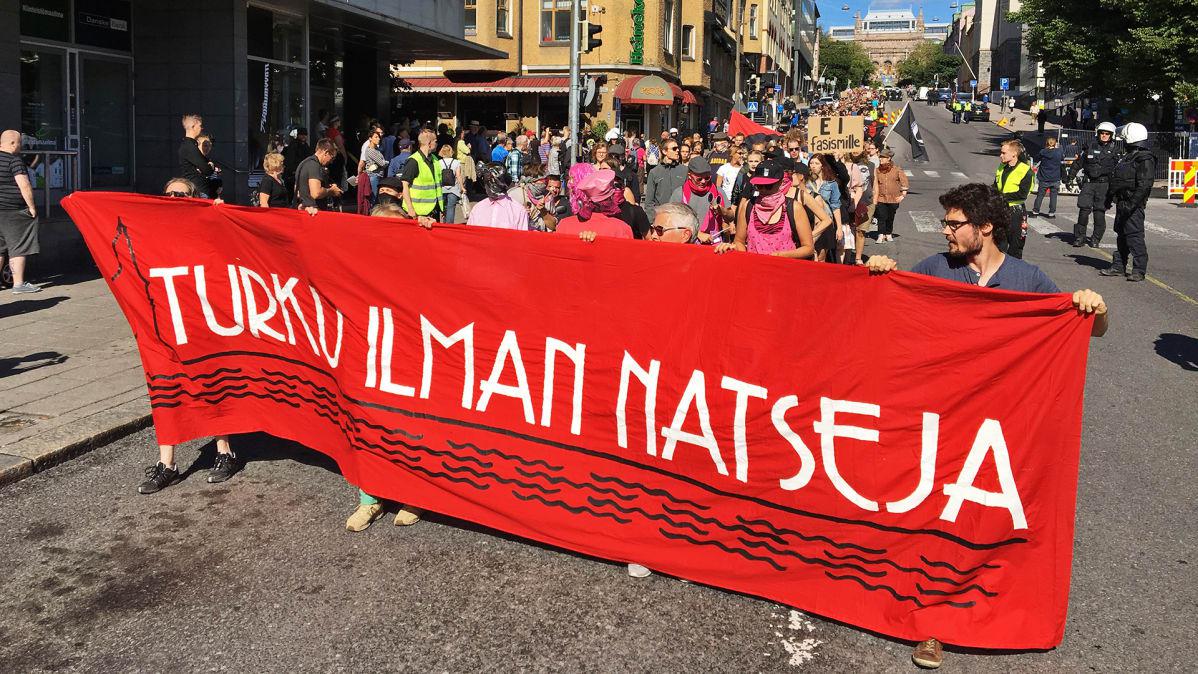 As the general political mood has been moving rightwards and values have become harder, there’s been more space for the Finnish fascist movement to act. At the beginning of the decade it wouldn’t have been possible for an openly national socialist organization like NRM to have demonstrations with their own name and symbols. These changes have formed a threat to antifascists, but they have also provided us with an opportunity to grow and create new alliances. When NRM has marched in Tampere, Turku and Helsinki under nazi flags, thousands of people have joined us on the streets to oppose the nazis. Even though we’ve created contacts with several cities (especially to Jyväskylä but also for example to Oulu, Lahti, Pori and Joensuu) and have received tips and hints from all over Finland, we’ve not been able to set up new local groups for Varis. We encourage everyone interested in starting local activities to contact us. 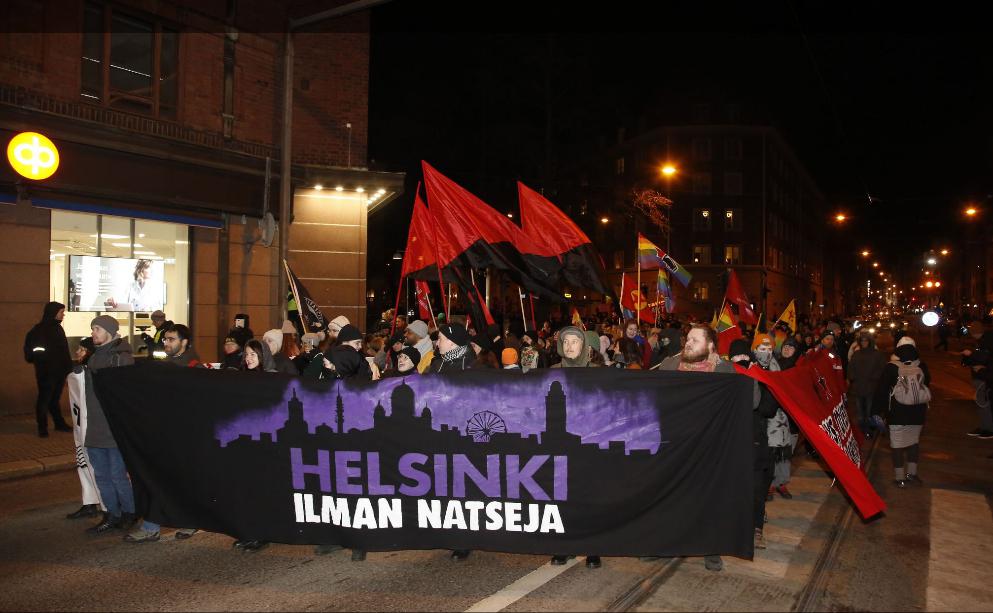 The last two years we’ve focused on maintaining our core activities, meaning local antifascist activity and more broadly the spreading of antifascist culture in Finland. At the same time we’ve had discussions about how anti-capitalism, feminism and international solidarity connect to antifascism and how we can make them concrete in our own activities. Because our activities start from a local level, it has gained very different forms in different cities. We are also open to new methods of antifascist action, if people joining our local groups are interested in implementing them. A big perk of a network is that it’s possible to co-operate and receive support and ideas from comrades from different cities.

We thank all the members of our network, both current and past, who’ve been part of our activities during the years. We also thank all, who’ve independently or in co-operation with us done antifascist work in the last decade.