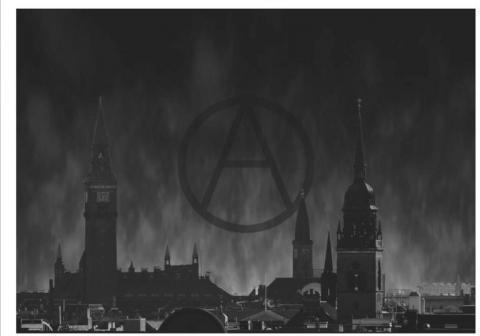 Danish territory: What follows is the editorial and the new edition (in English) of Orkanen (The hurricane), Spring 2019. The content of in this edition are a few texts from previous issues that were published in Danish.

Translations of a few texts from previous issues.

Editorial: The Hurricane is still raging

Approximately one year ago, Orkanen (The Hurricane) published its first English edition, wherein we attempted to translate a few articles in correspondance with the repressive world of today. Following that publication, surely, we had the intention of completing yet another English edition soon after, but alas, so much to do, and so little time to do it.

Now, we have finally come to the point where the second edition in English is ready, and for us this is a joyous occation. We feel that it is so important to connect with allies, and share revolutionary and violent ideas of freedom and change beyond the barrier of ethno-centric language, and this is presumably one way to do exactly that (though the English language is certainly tainted as well).

IN THE PAST YEAR we have tried to relay a portion of the current struggles here and abroad through the filter of anarchy; History is relevant, of course, but the present is acute. We have tried, and are still trying to speak down into the pockets of left-radicalism and the like through the Danish language, because we remain optimistic when gazing upon the clear sparks of freedom flying around this mindset. These sparks need to be made into a full-fledged firestorm, and to that end, we are operating tirelessly through this newspaper.

This particular lifestyle is not our only concern, though. From experience, we know that an insurrectionary can come from anywhere, even if most people seem to be downright hostile to this disposition. For that reason we are continuously trying to figure out how we can explain the whole chaotic, other-worldly, mysterious and frightening sphere of rebellious anarchism. Hopefully, the articles in this edition can be of some assistance.

Today, as anarchists, with all this shit happening in this world, it seems almost ridiculous to point out that the struggle for freedom from any and every form of oppression is crucial. Societies of cowardice are ruling this planet, and they have done so brutally and nefariously for centuries. It is not only the actual rulers; the representatives, kings, CEO’s and bureaucrats. We all carry the existing society on our shoulders, until we step out of line and free ourselves from being so insanely out of touch with the possibilities of fulfilling the needs and desires of our own, as well as giving every other being the same possibilities.

Having said all this, we want to send greetings of solidarity and strength to all comrades around the world, even if we do not have the faintest idea of how far this newpaper actually reaches. Stay strong in the prisons that come in numerous forms.

Stay strong and be brave everywhere facing fascists, homophobes, sexists, racists, and all the other people fighting against freedom and the succession of every individual’s happiness.

Finally, do not hesitate to contact us if you have anything rebellious in yourheart and soul that you wish to share; Orkanen1@riseup.net.