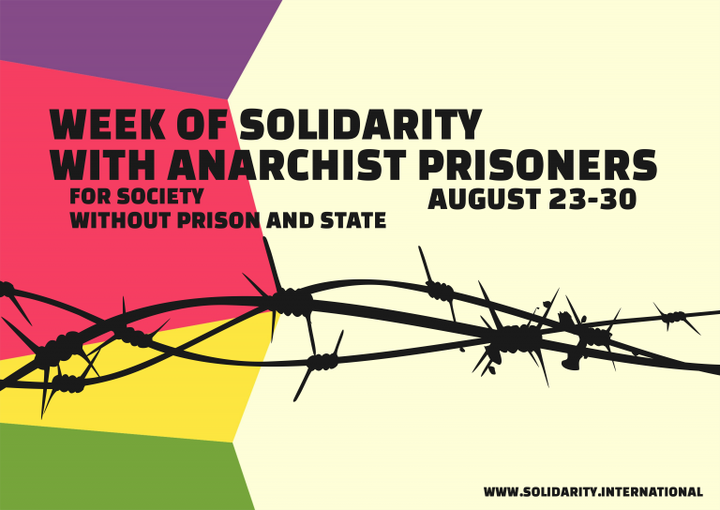 Call out for an International Week with Anarchist Prisoners 2017

Call out for an International Week for Anarchist Prisoners 2017

This year, the International solidarity week for anarchist prisoners will be spent for the fifth time in 23rd to 30th August and we come stronger than ever!

Some political prisoners are already supported, but far from all of them. Also, the supported are usually involved in authoritarian politics and not grassroots activities. Anarchist prisoners are not often well-known people, even though they might be long term activists. Their ways to fight back oppressors and wrongdoings are not necessary following the current laws of their location, which is judged by some authoritarian organizations. The vast amount and diversity of cases of anarchist prisoners is surprising to many.

We wanted to choose a week, so that it would be easy as possible to organize different kinds of expressions of solidarity, which would be supported by one another. The beginning of the week was chosen to be the execution date of Sacco and Vanzetti, two Italian-American anarchists, in 1927. They were convicted with very little amount of evidence, and many still consider that they were punished from their anarchist views.

Solidarity can express itself in many forms.

Please report us your done actions to the address tillallarefree@riseup.net. You can also announce your event in advance in the same address, we list them on our page http://solidarity.international/. From the pages you can also find examples and tips of actions and support mail to anarchists, links to prisoner lists and more.