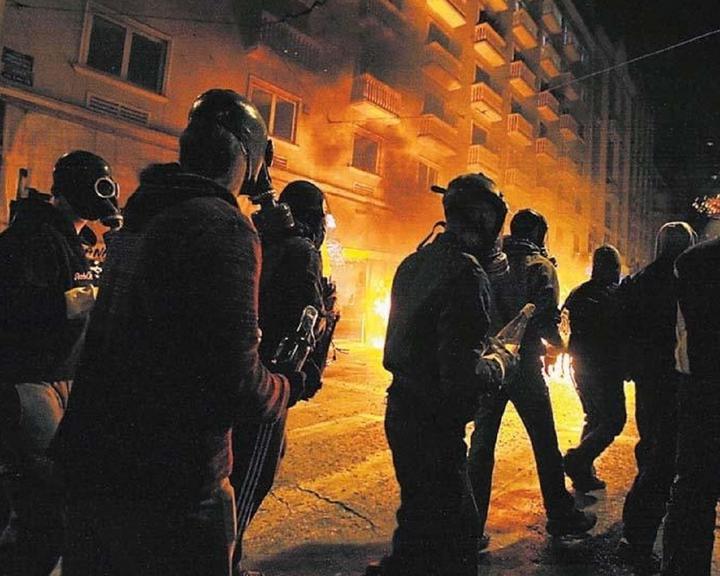 Athens, December 2008: “The ghost of freedom always comes with the knife between its teeth”

During the 2008 revolt many many texts were published. What follows is a statement by the Surrealist Group of Athens.

Shooting in the flesh is the high point of social oppression

All the stones removed from pavements and thrown to cops’ shields or shop-windows of the commodity’s temples; all the flaming bottles drawing orbits under the night sky; all the barricades erected on the city’s streets, separating our areas from theirs; all the bins full of rubbish of a consumerist society that the riot’s flames transformed from nothing to something; all the fists raised over the moon; these are the weapons giving flesh and real power, not only to resistance, but freedom, too. It is this feeling of freedom that only deserves to bet on in these moments: the feeling of forgotten mornings of our childhood, when everything can happen because it is us, as creative human beings, that have awaken up, not the future productive human-machines of the subordinate, the trainee, the alienated worker, the private owner, the family man. It is the feeling of confronting the enemies of freedom – not fearing them anymore.

So, everyone who wants to continue minding their own business, as if nothing is happening, as if nothing has ever happened, has serious reasons to be disquieted. The ghost of freedom always comes with the knife between its teeth, with the violent mood to break every chain that reduces life into a miserable repetition, useful for the dominant social relations to reproduce themselves. Since Saturday the 6th of December no city in this country functions normally: no shopping therapy, no free roads to reach our workplaces, no news about government’s next recovery initiatives, no carefree zapping among lifestyle TV shows, no night drives around Syntagma square and so on. These nights and days do not belong to shop owners, TV commentators, ministers and cops. These nights and days belong to Alexis!

As surrealists, we have been out in the streets from the very first moment, together with thousands rebels and other people expressing their solidarity, because surrealism has been born by the street’s breath and does not intend to abandon it. After the massive resistance to state murderers, street’s breath is even warmer, even more hospitable and even more creative. Proposing a direction to this movement doesn’t correspond to us. However, we accept full responsibility for the common struggle, because it is a struggle for freedom. Without being obliged to agree with every expression of such a massive phenomenon, without being partisans of blind anger or violence for its own shake, we consider this phenomenon’s existence right.

Let’s not let this flaming breath of poetry to just defuse or die!

Let’s convert it into a certain utopia: the transformation of world and life!

No peace with cops and their bosses!

Everybody in the streets!

Whoever cannot understand the rage can just shut up!