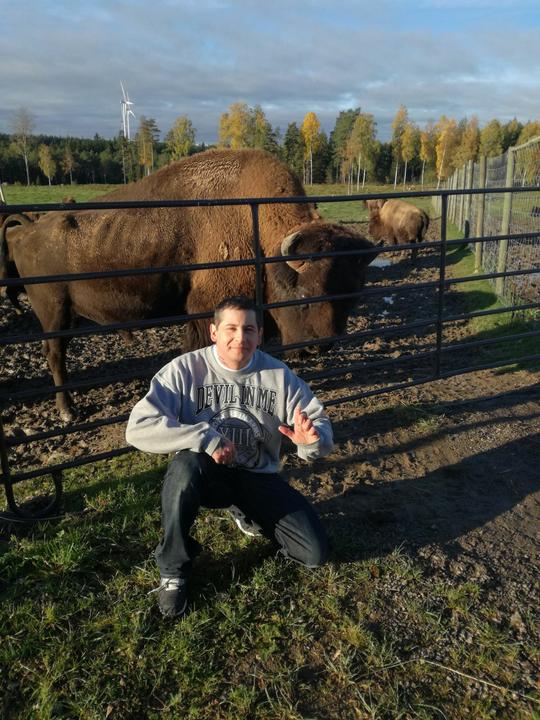 Almost four years ago, Joel was arrested on suspicion of attempted manslaughter on a nazi whom together with 30 other nazis attacked a peaceful demonstration i Stockholm. The background for the demonstration was that the nazi-organization SMR (Swedish Resistance Movement) had spray-painted propaganda around the area in the suburb Kärrtorp, south of Stockholm and the demonstration was arranged as a protest against this by anti-racists living in the area. On the spot where SMR attacked there were two cops present who under the trial against Joel witnessed about how it was the worst situation they had been apart of during their career as cops. On video which were used for evidence during the trial, the nazis screamed ”Sieg heil!” and ”Kill the red!”, the people on the spot have witnessed about how they tried to protect their children as they understood it was the nazis who was attacking.

There were approximately 30 nazis and members of SMR who have their background in VAM (White Aryan Resistance) which were active during the 90's. Many members of SMR have murdered immigrants, trade unionists, or people who simply don't think the way they do. During the trial against Joel the media tried to make the attack on the demonstration sound like it was a settlement between two rival hooligan firms, but we doubt that anyone who actually has knowledge about who SMR are and what they are capable of sees the situation as such. The court meant that the right for self-defense prevailed under the situation in the square, though Joel was convicted in District Court for manslaughter and 6,5 years. Both the prosecutor and Joel appealed against the decision and Joel was sentenced to 5,5 years in The court of Appeal. Today Joel sits on the Class 1 prison Tidaholm and have barely two years left on his punishment. He feels good, he keeps himself busy by writing letters, working out and being active in Fånggruppen.

Joel is the anti-fascist who's been sentenced for the longest imprisonment ever in Sweden (for a political crime). But after Joels sentence, another 20 years has been distributed between anti-fascists around Sweden. We offer to help them economically, for example with travels for their relatives to and from the prisons, we hand out our own newspaper Samsara every sixth week, we offer economic help with rent during time of arrest etc. If you want to help us with out work you can either buy any of our shirts or put a contribution to our bank account. (IBAN: SE 068 0000 8327 9943 8650 120, BIC SWEDSESS)

In solidarity with all imprisoned comrades!