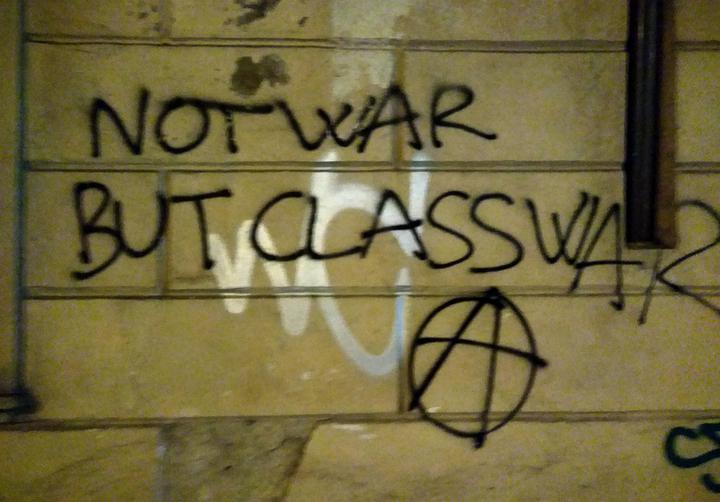 Notes: Note the opposing manifesto, The Manifesto of the Sixteen

Europe in flames, tens of millions of men at loggerheads in the most frightful butchery in recorded history, hundreds of millions of women and children in tears, the economic, intellectual and moral life of seven great peoples brutally suspended, with the daily more grave threat of further military complications—such, five months on, is the dismal, harrowing, odious spectacle offered by the civilized world.

But this spectacle was anticipated, by anarchists at any rate.

For there never has been and is no doubt—and today’s horrific events reinforce this confidence—that war is permanently incubating within the existing body of society and that armed conflict, be it specific or general, in the colonies or in Europe, is the natural consequence and necessary, inescapable destiny of a regime founded upon the economic inequality of its citizens, relying upon the unbridled clash of interests, and placing the world of labor under the narrow, painful oversight of a minority of parasites who hold both political power and economic might. War was inevitable; from whatever quarter, it simply had to come. Not for nothing has the last half-century been spent on feverish preparation of the most formidable armaments and every passing day seen the death budgets swell. Continual refinement of war materials, every mind and every will kept constantly geared towards ever-better organization of the military machine—scarcely the way to work for peace.

So it is naive and puerile, once the causes and the occasions of strife have been multiplied, to try to define the degree of blame attaching to such and such a government. No distinction is possible between offensive wars and defensive wars. In the current conflict, the governments in Berlin and Vienna have justified themselves by producing documents every bit as authentic as those produced by the governments in Paris, London and Petrograd. It is for whoever on each side who will produce the most unchallengeable, most telling documentation to prove their bona fides and portray themselves as the unblemished defender of the right and of freedom, the champion of civilization.

Civilization? Who stands for that at the moment? Is it the German State with its redoubtable militarism, so powerful that it has stifled every vestige of rebellion? Or the Russian State, whose only methods of persuasion are the knout, the gibbet and Siberia? Or the French State with its Hiribi, its bloody conquests in Tonkin, Madagascar, Morocco and forcible conscription of black troops; the France whose prisons have housed, for years past, comrades whose only crime was to have written and spoken out against war? Or England, as she exploits, divides, starves, and oppresses the peoples of her huge colonial empire?

No. None of the belligerents has any right to lay claim to civilization, just as none of them is entitled to claim legitimate self-defense.

The truth is that the root of wars, of the war currently bloodying the plains of Europe, just like all the ones that went before it, is located exclusively in the existence of the State, which is the political form of privilege.

The State is born of military might; it has grown through recourse to military might, and, logically, it is upon military might that it must rely if it is to retain its omnipotence. Whatever the form it may assume, the State is merely oppression organized for the benefit of a privileged minority. The present conflict offers a striking illustration of this: all forms of the state are embroiled in the present war—absolutism is represented by Russia, absolutism mitigated by parliamentarism, by Germany, a State ruling over very different peoples, by Austria, constitutional democracy by England and the democratic republican system by France.

The misfortune of the peoples, who were nevertheless all deeply committed to peace, is that they trusted in the State with its scheming diplomats, in democracy and in the political parties (even the opposition parties, like the parliamentary socialists) to avert war. That trust was deliberately abused and continues to be abused when those in government, with the help of their whole press, persuade their respective peoples that this war is a war of liberation.

We are determinedly against any war between peoples, and, in the neutral countries, like Italy, where those in government are seeking once again to push more peoples into the inferno of war, our comrades have opposed, oppose and always will oppose war with every ounce of energy they possess.

No matter where they may find themselves, the anarchists’ role in the current tragedy is to carry on proclaiming that there is but one war of liberation: the one waged in every country by the oppressed against the oppressor, by the exploited against the exploiter. Our task is to summon the slaves to revolt against their masters.

Anarchist propaganda and anarchist action should set about doggedly undermining and breaking up the various States, cultivating the spirit of rebellion and acting as midwife to the discontent in the peoples and in the armies.

To every soldier from every country convinced that he is fighting for justice and freedom, we must explain that their heroism and their valor will serve only to perpetuate hatred, tyranny and misery.

To the factory workers, we must be a reminder that the rifles they now hold in their hands have been used against them during strikes and legitimate revolts, and will again be deployed against them later to force them to submit to the employers’ exploitation.

We have to show the peasants that after the war they will once again have to bend beneath the yoke and carry on working their masters’ land and feeding the rich.

All of the outcasts must be shown that they should not lay down their weapons until such time as they have settled scores with their oppressors and taken the land and the factory for their own.

We will show mothers, sweethearts and daughters, the victims of overwhelming misery and deprivation, who bears the real responsibility for their grief and for the carnage of their fathers, sons and spouses.

We must capitalize upon every stirring of rebellion, every discontent in order to foment insurrection, to organize the revolution to which we look for the ending of all of society’s iniquities.

No loss of heart, even in the face of a calamity such as war! It is in such troubled times, when thousands of men are heroically giving their lives for an idea, that we must show such men the generosity, grandeur and beauty of the anarchist ideal: social justice achieved through the free organization of producers: war and militarism eradicated forever, complete freedom won through the utter demolition of the State and its agencies of coercion.