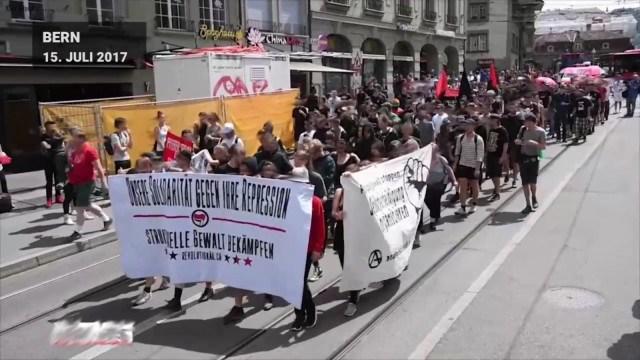 After G20, the repression: Tips and solidarity for the chased

Linksunten Indymedia issued a summary piece yesterday in support of people facing the upcoming crackdown against participants in the G20 protests in Hamburg earlier this month. We reproduce it in English here for broader uptake. Please note that legally this advice is aimed at people in Germany, but the security tips are applicable worldwide. Separately, Enough is Enough has updated with current solidarity activities in Germany here. Pic above from Indymedia.

The G20 is over and most of us are more or less secure and arrived safely at home and recovering from these disturbing and fiery days. However, we must not forget that some of our friends are being kept inside and comrades are still trapped. Our thoughts and hearts are with them and we hope that they are prepared for this eventuality.

That the 45 detainees so far are only the first should be clear to all. After all, politicians from all camps have explained that the “autonomous” are now public enemies number one and the police State is using the latest laws and technical achievements to spy on each subversive resistance and to nip it in the bud. This is fuelled by those media and onlookers who have already provided video and images for the manhunt.

This short anti-repression contribution is primarily aimed at young and new people in the “scene.” People who are often not yet organised and perhaps for whom this is the first time they found themselves in a confrontation with the State.

To put pressure on activists, raids on homes are one of the easiest and common methods, used by all repressive authorities. This is pursuing several aspects of repression. First, a psychological pressure on you exerted by the search, reminding you that the authorities may enter your private living space at any time. Second, it aims to seize things that can be used against you in pre-trial. In addition, in recent years an enormous DNA databasing scheme has emerged and is now practiced nationwide. Once your DNA is taken, it is possible to delete it from the databases via a judicial process, but whatever happens it is released for “law enforcement.” Discuss strategies on how to take action against it with an attorney.

What we still can do

We should stop thinking that only people being raided and pressured by law enforcement who have “done something” will be affected and have acted militantly, whereas people who just ran in the same circles will be spared it. This reasoning reveals a bourgeois confidence in the executive, judiciary and legislature that is neither appropriate nor corresponds to reality. We can’t yet know who will be who linked to whom and what will be attempted.

This means that among other things which must be removed should be mobile phones, storage media, maps, battle cards and clothing which is associated with G20 actions. Your PC should be encrypted! In times of digital mass surveillance safe use of your PC for (everyday) political practices should be followed. For those where this regard, there are still open questions, we recommend Ubuntu and Tails and Tor.

Think about what other objects could be found among you, and of strategies to minimise the risk – such as anything related to drugs, weapons, fireworks and graffiti.

Seek out a good civil lawyer

Good political lawyers specialising in civil law can now be found in almost all (larger) cities. Anyone who has been involved in political circles for a long time should have an attorney contact. It makes sense to sign a power of attorney and to deposit, so that in the event of arrest your lawyers can immediately take care of the legal issues and get you back out quickly.

Speaking with your affinity groups and circles of friends

After major events such as the G20 summit there are often special commissions set up and the pursuit pressure rises. We can all be affected. Think about why in advance what sort of support you would want as a victim if you land in eg. custody. It makes sense to discuss these things in your affinity groups. Exchange lawyers’ details and family contacts in your structures and explain, if necessary in writing, what you wish from your group or your friends.

Should be solo work be done and what should it look like? Do you want support to be publicised and to what extent? Are you happy for the media to be worked with, who and what? When/how should family be informed? Who does it and who maintains contact during incarceration? Who maintains contact with the lawyers? If these questions are clarified in advance it facilitates solidarity work from the beginning and gives you a better feeling that s everything is organised.

This applies to both your black stuff and for your spare clothes, as well as hats, gloves, underwear and backpack/bag or action cards. And especially the same goes for shoes, because if shoes with applications or holes can be seen on the video, they should not be found with you. We write here explicitly of this, since it is often difficult for people to part with their shoes and there are examples from the recent past where people were charged due to their worn footwear.

No movies, no pictures!

In addition, some cases have been reported in which people who had film and video recordings of actions, for example, of demos on their phone were charged and convicted in recent years. We can only again urgently appeal to you, don’t film or photograph actions with your mobile phone. This endangers not only yourself but for many other people. We are aware of the beautiful images of burning Bengalos and fleeing cops, but there are already enough press teams who constantly make photos and videos. Just leave your cell phones at home.

In general, any statements made to the cops applies in court. Every little detail you give can be used against you and others. Therefore it is advisable to refuse to make any statement. Remember always that cops are not friends and good on the inside, but psychologically-trained human hunters where it comes putting you away.

We should be clear about what consequences it can bring when we enter into an open confrontation with the State. Why this can be seen daily on small and large scales. However, we believe it is important not to descend into panic and paranoia, but to continue our political practices with a cool head and be as well prepared as possible.

How far the repression will fall in the coming weeks and months will show why it is now more important than ever to talk in your group about fears and collective strategies. The G20 is behind us. In front of us are more adventures. From our new experiences we will include a life in freedom and dignity in our struggle.

Freedom for all prisoners!

Legal Aid Tips: From A to Z