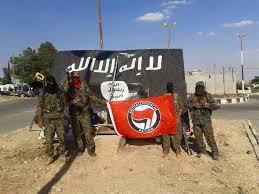 Actual footage of the anarchists comrades of the "Revolutionary Union for Internationalist Solidarity" (RUIS) fighting in Syria against ISIS in the battle of Raqqa.


Here's their message accompanying the video:

"This video contains footage from RUIS combatants fighting within IFB. IFB has stood with YPG/YPJ/SDF and they liberated the city of Raqqa from the fascists of Daesh (IS) at the end of October 2017. At Orhan (the last occupied IFB nocta), the battalion was fighting directly the IS gangs that were surrounded by the liberation forces.

FOR COMMUNITIES OF THE OPPRESSED
FOR VICTORY OVER TYRANNY
FOR ANARCHY

Rojava's light burns in the hearts of the oppressed, showing that the wordwide uprising for social liberation is possible.