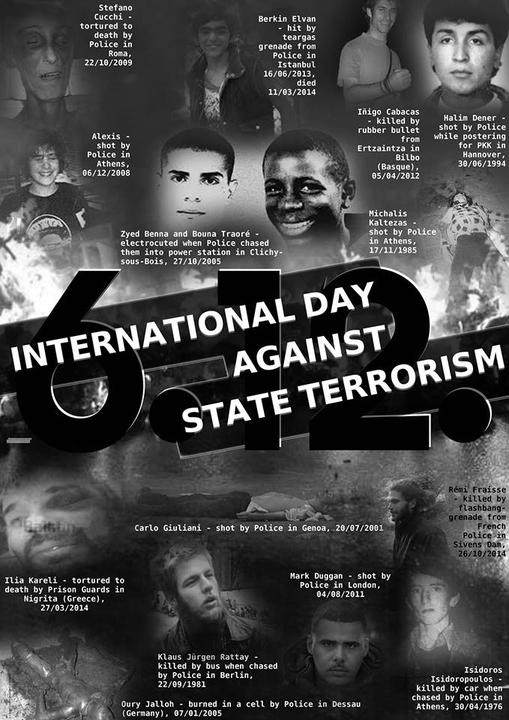 6 December 2008 , 15 years old Alexis Grigoropoulos is shot point
blank by cops in the neighborhood of Exarchia in Athens. Alexis
falls from the bullet of state murderers and a hurricane of rage
rises. This was no accident; it was a targeted murder in the heart
of a neighborhood that is, as much historically as in the present,
a hub for the oppressed to organize themselves into the
resistance movement. The message was clear, to terrorise the
resistance, to assert state totalitarian control, to stifle the
brewing insurrection against a decrepit system of exploitation and
oppression. The story of Alexis is the story of thousands of
fighters shot, tortured and dissappeared by the armed guards of
the state around the world.

In the hours, days and weeks that followed the murder of Alexis
myriads of people, who saw in the killing of Alexis their own
sufferings in this system, took to the streets around the world.
The wave of solidarity broke the isolation and alienation of the
oppressed and awakened once again the global vision for a world
without exploitation from authority. This history, our history is
not a collection of dead symbols. It is our storming ground for
the ongoing struggle against the slavery of humanity by capitalist
exploiters, their state aparatus and their armies.

States are founded on terrorism and violence.
When the political system is losing all legitimacy, when it faces
the real prospect of mass uprising, it shows its claws, it becomes
increasingly violent to hold on to its power. In this ongoing
“crisis” of the political system we, the oppressed classes, are
experiencing an attack on all fronts. Sweeping eradication of all
that the workers' movement had achieved with sacrifice and
struggle, harsher laws against the impoverished, harsher prison
regulations, totalitarian control of public space, mass incarcerations
of migrants, violent repression of prison uprisings, criminlization
of resistance, counter-terrorist legislations, martial law in our cities, isolation prisons for
political fighters. The police is at the forefront of this attack,
as the armed guards of the state. Tortures and “accidental”
deaths in police stations, violent repression of mobilisations
with brutal beatings, chemical weapons, plastic and even real
bullets and mass arrests. This is the mosaic of state terrorism.

Remember remember the 6th of December! The state has every
interest in wiping out our history in order to wipe us out. We
must not let an inch of ground to this onslaught. We must defend
our history as our own living selves. We must defend our
neighborhoods and spaces of resistance, our self-organized
projects, our ground where we live, meet and where we organize to
fight back.We must defend our struggles against state terrorism by
all means.

We call for an international day of action against state terrorism
in rememberance of...

...and of all the unkown and unnamed ones. We don't forgive. We
don't forget. No step back.

6 December 2017
EVERYONE TO THE STREETS