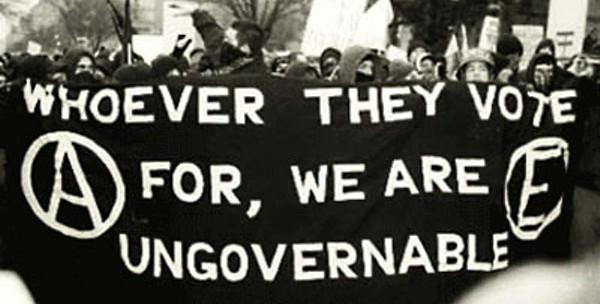 Why anarchists do not vote

EVERYTHING that can be said about the suffrage may be summed up in a sentence.

To vote is to give up your own power.

To elect a master or many, for a long or short time, is to resign one's liberty.

Call it an absolute monarch, a constitutional king, or a simple M.P., the candidate that you raise to the throne, to the seat, or to the easy chair, he will always be your master. They are persons that you put "above" the law, since they have the power of making the laws, and because it is their mission to see that they are obeyed.

To vote is befitting of idiots.

It is as foolish as believing that men, of the same make as ourselves, will acquire in a moment, at the ringing of a bell, the knowledge and the understanding of everything. Of course it is so. Your elected person shall have to legislate on every subject under the moon; how a box of matches should or should not be made, or how to make war; how to improve the agriculture, or how best to kill a tribe of Arabs or a few Negroes. Probably you believe that their intelligence will grow in proportion to the variety of subjects they have to give their minds to; but history and experience teaches otherwise.

The possession of power has a maddening influence; parliaments have always wrought unhappiness.

In ruling assemblies, in a fatal manner, the will prevails of those below the average, both morally and intellectually.

To vote is to prepare shameful treachery and traitors.

Electors do certainly believe in the honesty of the candidates, and this is to a certain extent existing while the fervor and the heat of the contest remains.

But every day has its to-morrow. As soon as the conditions alter, likewise do men change. To-day your candidate bows humbly before your presence; to-morrow he will say "pish" to you. From a cadger of votes he has turned to be a master of yours.

How can a worker, enrolled by you amongst the ruling class, be the same as before, since now he can speak in terms of equality with the other oppressors? Look at the servility of any one of them, written all over his face, after paying a call to a "captain of industry," or when the King invites him to the ante-chamber of his court !

The atmosphere of the "House" is not for deep breathing; it is corrupt. If you send one of yourselves in a foul place, you must not be surprised afterwards if he comes back in a rotten condition.

Therefore, do not part with your freedom.

Instead of intrusting the defence of your interests to Others, see to the matter by yourselves. Instead of trying to choose advisers that will guide you in future actions, do the thing yourselves, and do it now! Men of good will shall not have to look long in vain for the opportunity.

To put on others' shoulders the responsibility of one's actions is cowardice.