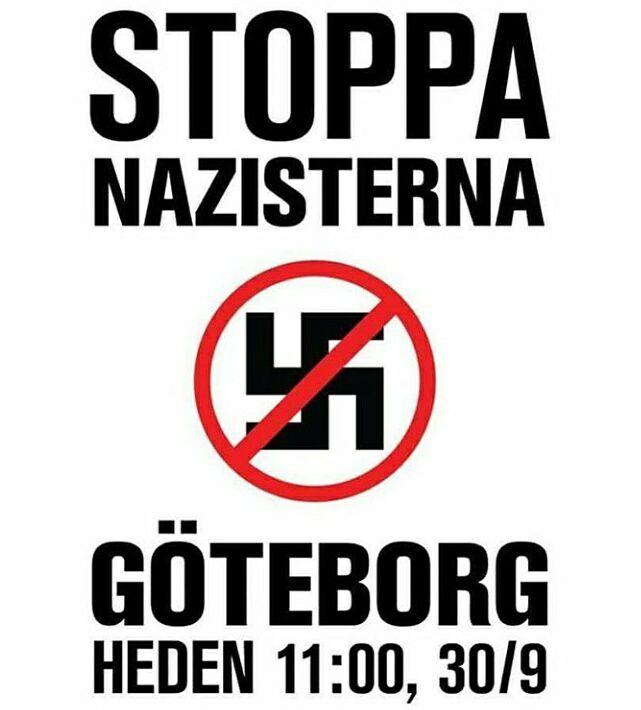 In a period of significant rise for the extreme right in Europe and only some days before the march of the nazist Nordic Resistance Movement (Nordiska motståndsrörelsen - NMR) in Gothenburg (and the consequent antifa demos), the swedish state chooses to harass several antifa activists either by calling or "visiting" them.

Agents of the swedish security service SÄPO intrude in the lives and integrity of many of our comrades by exposing them to ridiculous questions about the upcoming antifa demo, spreading uncertainty and fear, hoping to repress our resistance against the nazis.

It is unclear what is the criteria for how SÄPO selects their "victims". It is unclear if there is a certain pattern. They call/visit and harass people that have been active in autonomous/anarchist groups, activists who have participated in social movements and social struggles. This is obviously another case of a secret register that the swedish state has created against its citizens.

We need to point out here that it is the same agency that a couple of years ago proclaimed the nazist environment in Sweden as "insignificant and not dangerous", at the same time as the Swedish Democrats (a former nazist political organization that has turned into a populist far-right party a la AfD) took the third place in the swedish elections and the number of arson attacks against housing venues for refugees exploded.

While antifascists in Sweden are being repressed and threatened by the state, the nazis of NMR have received a letter by the police that explains in detail all the possible reasons why law enforcement could attack them during their upcoming demo on September 30. The cops warned the nazis that they are not allowed to wear uniforms, to parade, and to have symbols of racial agitation, among other things. You could call that a friendly exchange of tips between partners. Moreover, around 60 NMR nazis managed to "spontaneously" march in central Gothenbourg some days ago, totally ignoring all these prohibitions that the swedish law enforcement warned them about. The cops just observed them without doing anything against them, despite the fact that the nazis posed a threat to many passers-by, were aggressive against the cops and did not have a permission for their demonstration. It is worth mentioning that the cops announced a day after the "spontaneous" demo that they knew about this "secret" event but they managed to "lose" this info somewhere within their bureaucracy.

No, we do not complain about the fact that the liberal state does not confront the nazis. We do not have any illusion. No state attacks its own arms! Not even the "most liberal and democratic state in Europe", the well known swedish model: the pioneers of race biology and eugenic experiments on disabled people, the neutral nation in WWII that profited by the tragedy of its neighbors, the state that maintains secret register on Romani people, the self-allegedly most open society in the world that recently legislated one of the cruelest laws against migrants and refugees etc, etc, etc! We are just exposing the contradictions.

Despite the threats and the harassment, a broad and pluralist antifascist movement will be on the streets of Gothenburg next Saturday, to oppose peacefully, artistically, passively, aggressively, violently, militantly the NMR. We will show the nazis that there is no space for them in Gothenburg or anywhere else.

From Charlottesville to Barcelona, and from Berlin to Gothenburg, for all the reasons of the world:

Ps. To SÄPO, svenska polisen and the swedish state:

YOUR THREATS AND REPRESSION DO NOT SCARE US, YOU ENRAGE US!

Anarchists from the south

Anarchists from the south