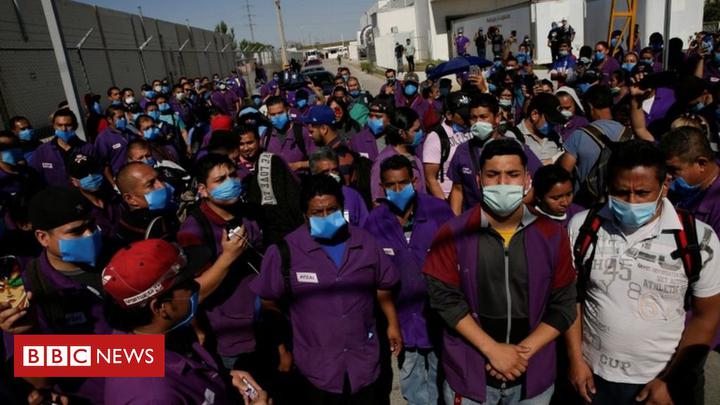 The Class Struggle in Mexico

By: Wildcat, Germany, and translated by AngryWorkers

The women’s movement was the biggest movement before the Corona lockdowns and shutdowns. On the 8th of March this year, 200,000 people were on the streets in Mexico City. In the ILA 434 (Latin American magazine) Sonja Gerth describes a cross-class demonstration of “well-off women, young school kids, companies…” Obviously femicide is bad for business too!

On March 9th, on the day of the Women’s Strike (‘A Day without Us’), schools had to close, even Audi and Volkswagen stood still because the work process would be ‘unsafe’ without the female workforce.

In 2020 there were innumerable demonstrations, women even attacked the big government building on the main square in Mexico City.

The 2019 Strikes Could Reduce the Trend of Extreme Inequality

Mexico is the country with the 15th biggest nominal GDP and 10th highest number of inhabitants. Carlos Slim earns 70 million dollars in one day – 50 million Mexicans earn less than a dollar a day. 30 million work without any social security. Half of the population lives under the poverty line, a further 30% could fall under it any time. While social inequality has decreased in other Latin American countries over the last two decades, poverty has increased in Mexico. Only last year’s strikes were able to counteract this trend. In July 2019 average real wages amounted to 4173 pesos or around $218 a month. Real income was 1.4% higher in the second quarter of 2019 compared to the same quarter the year before. Since July 2019 it rose by 2.3%. In-work poverty also receded slightly due to the 20% increase in the minimum wage.

Has Covid-19 Stopped the Positive Trend?

“In every crisis, inequality has risen in Mexico”, wrote the Financial Times on the 30th of March. A street vendor expressed it thus: “Quarantine is for the rich!” And ‘the rich’ have also brought Covid into the country – in the American ski paradise of Vail in Colorado, where Mexico’s business elite mainly indulges in après-ski, a cousin of Carlos Slims and the head of the Mexican stock exchange and fellow travellers were infected – the head of the stock exchange died of Covid-19 after his return.

On March 30th the government called a state of national ‘health emergency’ and banned all non ‘system-relevant’ activity until the 30th of April. Companies should continue to pay full wages but the Minister of Social Affairs and Employment said she wouldn’t be enforcing this. With a fuzzy definition of ‘system-relevance’ along with pressure from the USA, companies are keeping going, especially in the maquiladoras, and especially in the factories for the US arms industry. In the middle of April, 13 workers in a car-supply factory in Ciudad Juarez died (a company called Lear which has its HQ in Detroit). At the end of April 1000 people nationally were confirmed dead due to Corona. The economic situation does not allow a curfew, millions are living hand to mouth through the service economy and street-trading. A scenario like in Italy or Spain will be dramatically exceeded if many people are infected. Mexico only has 4000 intensive care beds for 128 million people, a majority of who were already sick before Corona because of years of bad industrial food with overdoses of sugar, etc.

In the aforementioned FT article it is assumed that an economic decline of 5% could cost 1.7 million jobs, of which 700,000 are in the formal sector (so everyone with social security). 500,000 more jobs could go on to be lost if small businesses and shops go bust.

After President AMLO, like his counterparts further north and south, had initially ‘denied’ the seriousness of Corona, the government is now postponing investments and making cuts to public services. Since the beginning of the year, the peso has lost a third of its value compared to the dollar; proletarian income has dropped continuously in relation to that in the USA. In total, poverty will increase more than during and after the crisis in 2008, if a grassroots movement to remedy it isn’t found. ‘Possible death from Covid-19 or a definite death through hunger’ is, unfortunately, a widespread attitude.

Another problem is the border closing with the USA. In 2019, 36 million dollars was transferred from Mexican migrants from the USA to their relatives in Mexico. Over 200,000 workers went over the border to the fields in California, Washington state etc. with a H2A work-visa. This year it will certainly be less. This eats into the neighbouring southern countries where 34 million people live (Guatemala, Belize, El Salvador, Honduras). For example, remittances make up 30% of peoples’ income in Guatemala, in the countryside this can go up to 90%.

In addition, there is a more competitive black market for drugs because the prices of raw materials from China are multiplying (e.g. Wuhan’s chemical factories supply Mexican drug production plants directly).

The Mexican state is protecting itself against falling oil prices and a falling oil rent by using Wall Street – at least they got off with a black eye in 2009 through hedge funds in future markets.

2020: Strikes for Income Security and Health in Times of Corona

As in 2019, the strikes began in the state of Tamaulipas, with 3.3 million inhabitants on the border with Texas. In late April, strikes and protests had spread to other states.

On the 25th February 2020 all the workers of two car supply factories were called to strike by a union leader – they were demanding a 20% wage increase, having only been granted 8%, as well as a productivity bonus, a canteen, and an extra 15 minutes break. The two factories, with a total of 4600 workers belongs to a company called Aptiv, a, outsourced company of an outsourced company used to reduce wages (first it was called General Motors, then Delphi, now Aptiv). At the same time, the strike was declared illegal and the union leader received threats from politicians. It wasn’t possible to find out how many workers refused to work their shifts and how much this affected productivity. There were pictures of workers who didn’t enter the factories and reports of 400 workers occupying a state building to press their demands.

These Aktiv workers had already fought for higher wages back in 2018 and 2019 in the ’20/32 movement’, with a demand for a 30% increase in wages. The Mexican media reported that the workers referred to President AMLO’s promise to increase minimum wages by 20%.

First, workers organised an action against compulsory union fees on 10th March. State police disbanded the protest outside the labour court (incidentally, the police also broke up a two-week long teachers’ blockade in the state of Veracruz – they were demanding free democratic union elections).

In Matamoros (with 500,000 inhabitants), industrial zone 1 is historically characterised by General Motors. The supply factories, that today operate under the names of different companies, are situated in streets called ‘Calle Ohio’, ‘Calle Michigan’ etc. Industrial zone 2 is bigger, including amongst others, european businesses: Arkema (a French chemical conglomerate), Kongsberg (Norwegian car component supplier), Hilti has also ended up here (a Lithuanian tool shop). The factories work in two shifts, with one worker working 12 hours a day, seven days a week! In the east of the city there are 70 factories, 35 in the west, plus those in between (like Coca-Cola, where there was also a strike in 2019). Security is everywhere, but quite apathetic.

On the first day after the state announced the shutdowns (on 31st March), workers in both industrial zones organised strikes, with additional factories joining them on the 1st, 3rd and 6th of April. It is reported that the continued payment of wages is limited to 200 pesos per week – this isn’t enough to even buy even two cartons of eggs. Many companies pay 50-60% more, some maquilas have been forced by law to pay 100% of the wages.

With 600,000 inhabitants, Tamaulipas is the biggest border town. On 7th April workers of three factories refused to work because of poor health and security measures against Covid-19 infection. A union leader assured them that they would get 100% of their wages of they stayed at home. Only volunteers should come to work.

Strikes and protests have been spreading west to the industrial cities of Ciudad Juarez, Mexicali and Tijuana. More than ten thousand workers work in maquilas there – 120,000 to over 300,000 continued to work in Ciudad Juarez despite rising cases of Covid-19. In Mexicali 7% of the inhabitants work in such companies, close to 70,000 people.

On April 16th, workers in Ciudad Juarez started a strike for protective equipment. Since then, other workforces or parts of workforces have continuously joined the movement. Another demand is the continued payment of full wages and plant closures – workers at Foxconn and Eaton have already achieved this. It is in the nature of a strike dynamic that exact figures on striking workers and enterprises, on actions, etc. cannot be given precisely. In any case, the New York Times and others can no longer look away. The chief con-artist in Washington is already tweeting warnings to the Mexican workers – just like his left-wing friend in Mexico City. But Mexico’s economy is being hit hard. And AMLO is disappointing hopes – with or without the corona crisis. The military and police now guard hospitals. His hobby-horse, the Guardia Nacional, is preparing against “social unrest”.