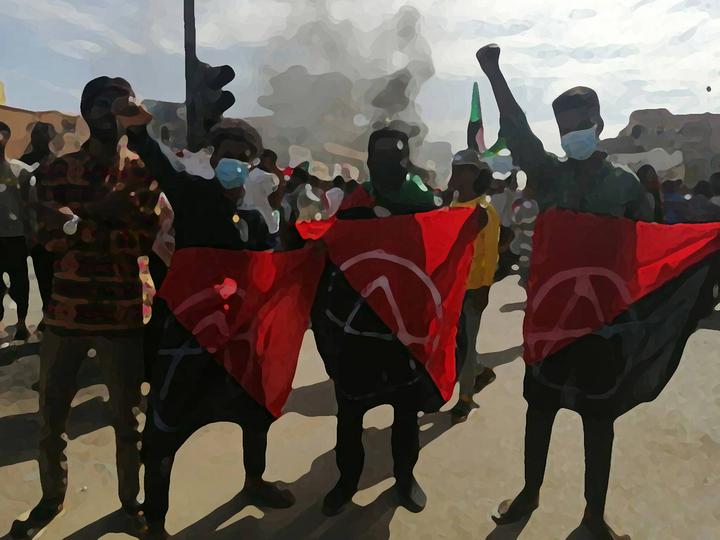 Sudan: Anarchists against the Military Dictatorship - An Interview with Sudanese Anarchists Gathering

Yesterday, in Sudan, during nationwide demonstrations against the military dictatorship that seized power on October 25, state forces repeatedly used live rounds against protesters, killing at least four people and wounding many more. Security forces have killed scores of demonstrators since the coup of October 25. Nevertheless, a powerful movement based in local resistance committees and courageous street demonstrations continues to resist the consolidation of power under the military. We present the following interview with anarchist participants in the demonstrations in hopes of helping people outside Sudan to understand the situation.

In December 2018, massive countrywide protests broke out against dictator Omar Al-Bashir, who had ruled Sudan for some three decades. Al-Bashir fled in April 2019; yet riots, blockades, and sit-in protests continued against the Transitional Military Council that seized control of the government, and a massive protest occupation held territory in Al-Qyada Square at the heart of the capital city of Khartoum. Militarized forces associated with the Council stepped up their attacks on protesters, culminating on June 3, 2019 when they brutally evicted the sit-ins. They committed a particularly brutal massacre when they attacked the occupation in Al-Qyada Square.

In response, a general strike gripped much of Sudan from June 9 to 11. Yet some representatives of the movement consequently entered negotiations with the regime, establishing a power-sharing agreement in which a provisional government composed of military and civilian representatives was to manage the transition to a new administration. This came to an end with the military coup of October 25.

The first part of this interview with anarchists in Khartoum, the capital city of Sudan, took place on December 28. The second part was written immediately after the nationwide demonstrations of December 30. You can learn more about Sudanese Anarchists Gathering via their facebook page. We will update this article with more information as we learn how people outside Sudan can best support them.

The interview was conducted in Arabic and hastily translated. We’ve combined some questions and answers together for clarity. 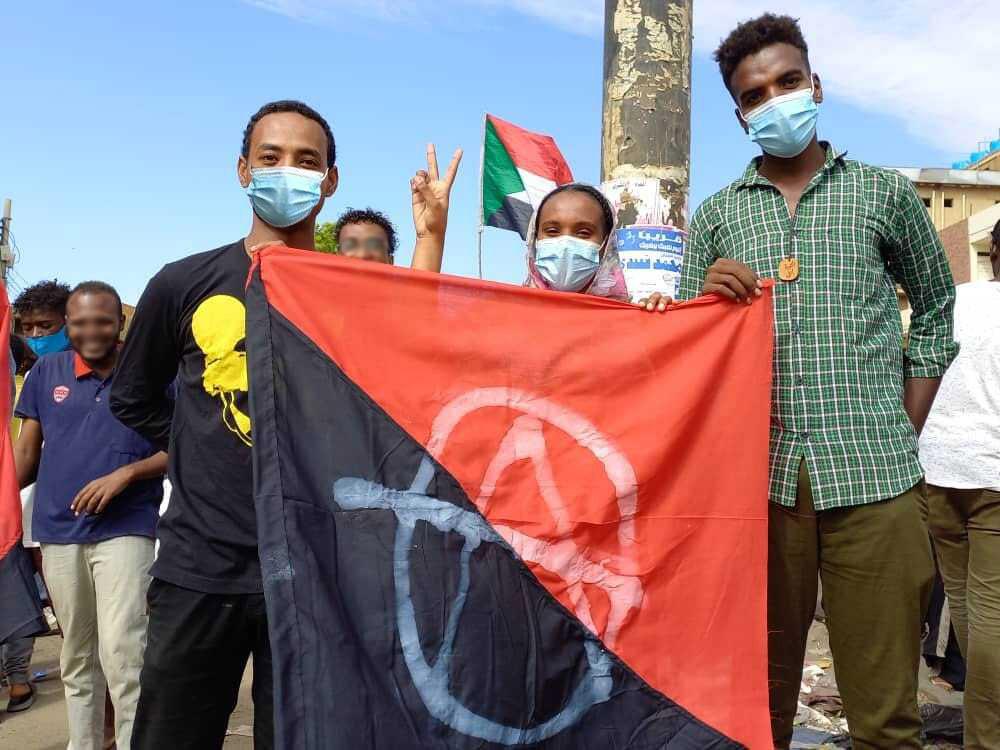 First of all, tell us a little about your group.

The group was created in Khartoum at the end of 2020 after we assembled all anarchists in Khartoum. We’ve been together since the revolution of December 2018, and some of us have known each other since high school and university.

We, anarchists of Khartoum, are members of the “resistance committees” and we raise our flags during marches with the rest of revolutionaries, and we promote anarchy by writing graffiti on the walls.

We oppose all types of authoritarianism. We are for freedom of expression and individual autonomy.

Do you have any connections with anarchists outside of Sudan?

You’re the only anarchists we have connections with outside Sudan. 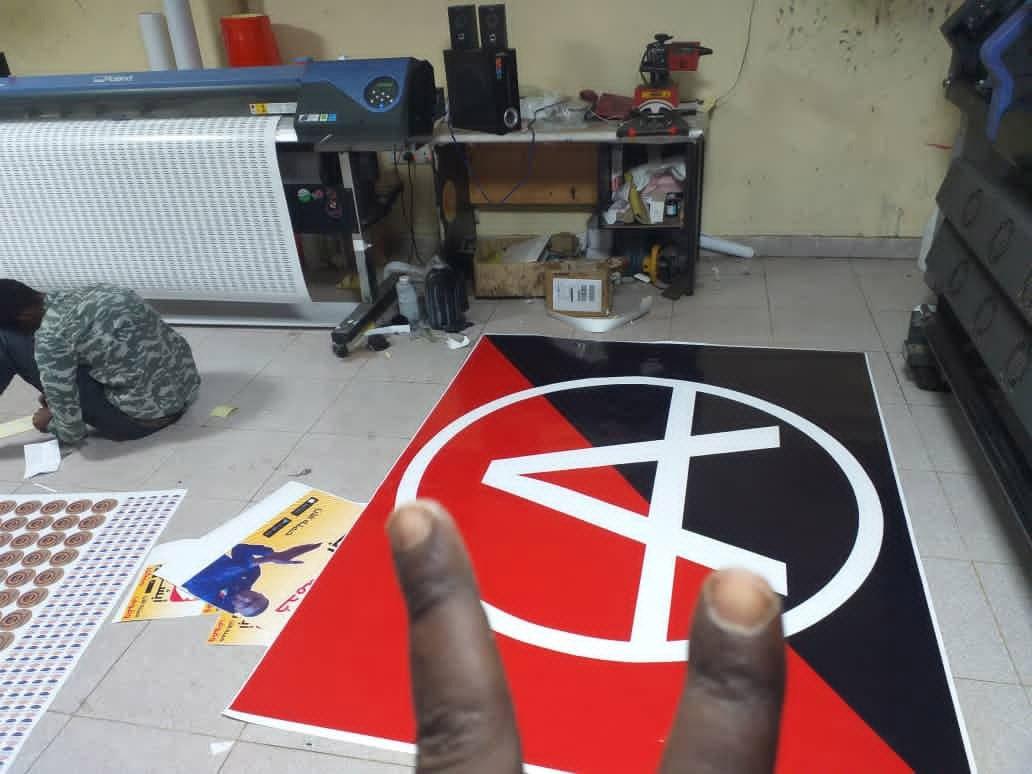 Are there other anarchists and anarchist groups besides you? Or as far as you know is it just you?

There are other anarchists in Sudan in the city of Port Sudan, and we’re reaching out to them so that we can get together with them and then hopefully eventually with anarchists in the rest of the world—and with earnest efforts, we will spread anarchy throughout the world together.

Does Sudan have a history of anarchist struggle or is it a newer thing there?

Anti-authoritarianism as an idea and practice emerged for the first time in Sudan during the first march of the 2018 revolution. But the media coverage was very weak and thus it was overlooked.

How have people been responding to anarchists? What is the relationship of anarchists to the broader protests and the social movement?

The people are polarized about the anarchist movement, but what matters to us is that our fellow revolutionaries are in cohesion and complete solidarity with us; we are together with them in this struggle to subvert the fascist system and to create a horizontal system, organizationally speaking, and a socialist system, economically speaking. The demands of the “revolution” are very similar to ours.

Can you tell us about the current situation in Sudan? As we understand it, protests have been ongoing since at least 2019, first against [former head-of-state] Omar Al-Bashir and now against the military junta. What forms of repression are state forces or others carrying out at this moment?

The revolution has been ongoing since December 2018. When the revolution started, protests were suppressed violently at the hands of the Muslim Brotherhood government led by Omar Al-Bashir, which we overthrew on April 11, 2019, when we occupied and sat-in at the general headquarters of Sudan’s military. But unfortunately, the occupation was later suppressed: 500 revolutionaries were killed and our revolution was stolen by the military’s commanders and the “soft landing.”1 On August 17, 2019, they (the Transitional Military Council, or TMC, and the Forces of Freedom, or FCC2) agreed to a 39-month transition process to return to democracy. We the revolutionaries, however, didn’t stop—we kept protesting against the military in the hopes of making the transitional government transition to an actual “technocratic” civilian government [i.e., a government composed of civilians, not career politicians].

And then the coup [of October 25, 2021] happened and the military dissolved the civilian government and arrested its members.

But we’re not giving up. The streets are brimming with defiance and opposition to them again, although they’ve murdered 47 revolutionaries and injured 1200 others using tear gas, stun grenades, and live rounds ever since the coup. We’re still protesting and aiming to overthrow them now. 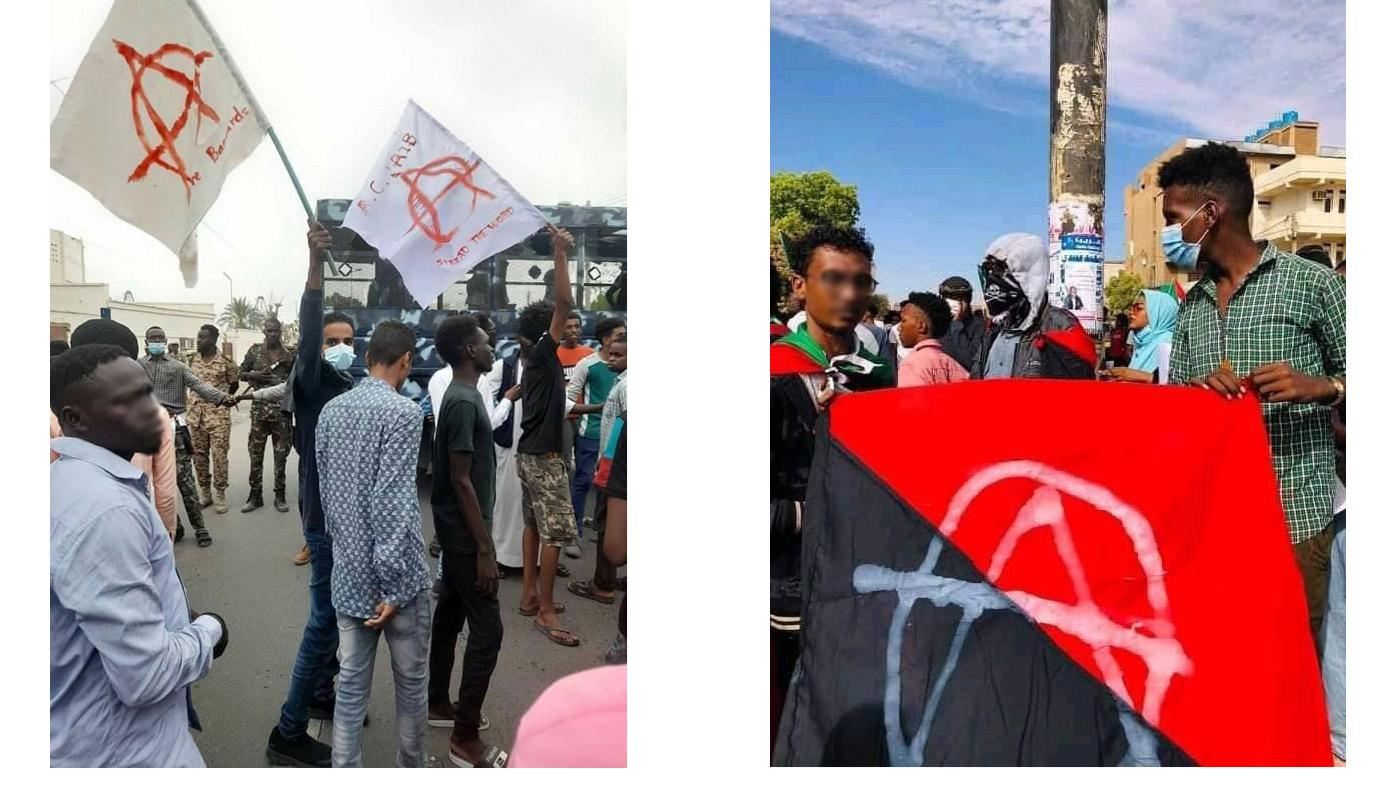 What is your position on the non-anarchist groups in the Sudan? Do you work with them? If you cooperate with them, what is the nature of your cooperation?

We’ve separated ourselves from the “political incubator”3 that participated in the revolution and we’ve formed resistance committees with fellow revolutionaries consisting of all revolutionary movements; we started leading the revolution on the streets to overthrow the government despite the violence we face from them. We face their violence and bullets with unprotected chests and non-violent means.

And they sometimes shoot live rounds at us, which leads to either injuries or deaths.

Is there something else we should know? Do you have any requests of the international anarchist movements?

We’ve got plenty of marches and protests planned on Thursday. We’ve already decided the routes of the marches with other revolutionaries before the authorities could block the internet; all of them are headed toward the Republican Palace. These marches will be met with excessive violence; I might end up dead, because we anarchists are always at the front and we organize the marches on the streets.

We ask for material support because we don’t have any sponsors. We spend money out of our pockets and the money we have doesn’t cover our needs because prices have become prohibitive in Sudan and as youth we don’t have enough money. We hope all anarchists in the world will support us. 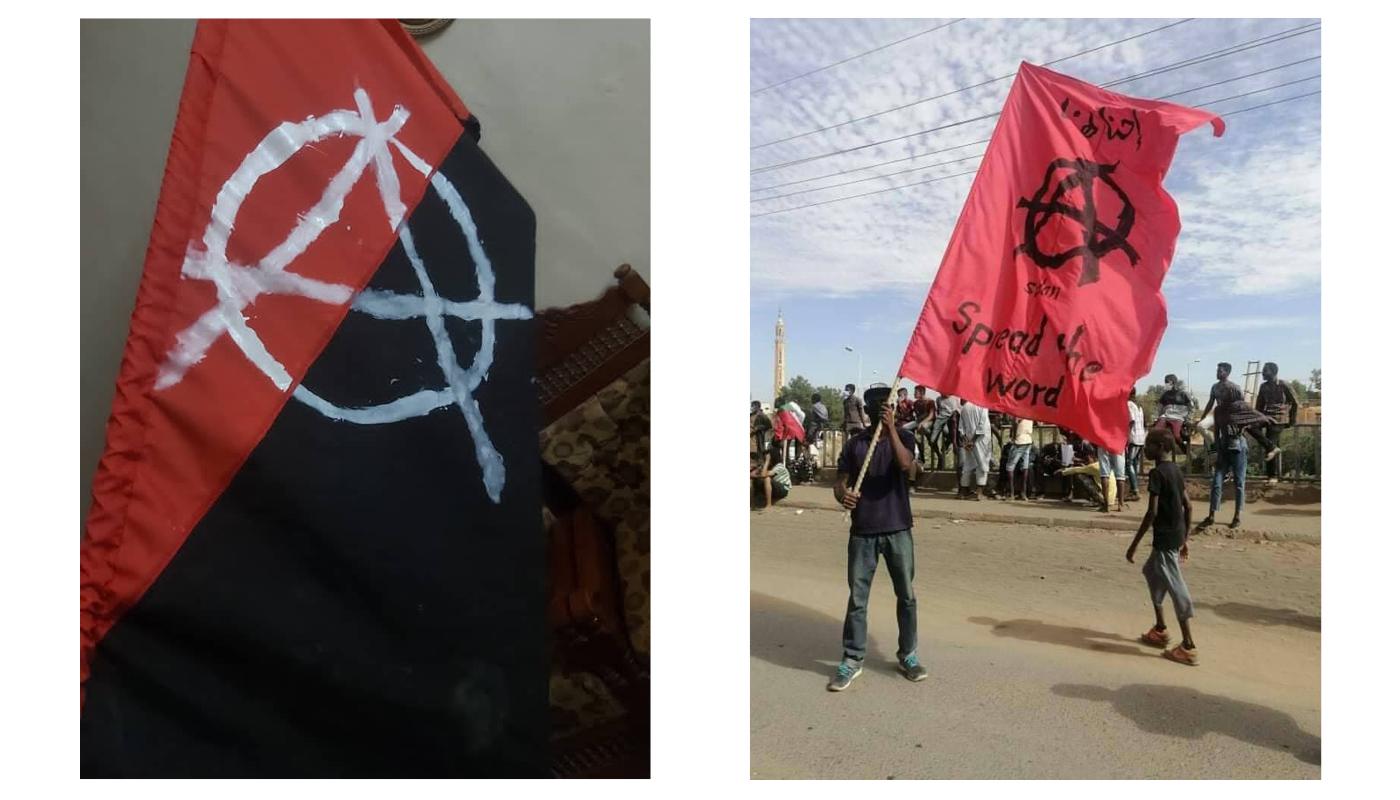 Two days after conducting the above interview, at the conclusion of the demonstrations of December 30, we received the following message from our contact in Sudanese Anarchists Gathering.

We couldn’t reach the palace. They had obstructed the roads with huge dry containers and they blockaded the cities of Omdurman and Bahri (nobody from those cities was allowed to get into Khartoum) and then they committed atrocities towards us in Khartoum (where the palace is).

They shot live rounds at us and they even used a DShK4 which inflicted injuries and deaths on our numbers. They also assaulted journalists and raided the buildings of Al-Arabiya (a TV news channel) and al Hadath (another TV news channel); they had arrested their employees but have already released them. They also raided hospitals, attacked doctors, arrested them, and arrested our injured comrades too.

They’re not allowing us to take the martyrs’ bodies to bury them. We’ve only retrieved and buried two from so far. We’re working on doing the same for the rest.

There are four martyrs so far, but there are many live-round injuries. Glory for the martyrs and death to the military and to authority. 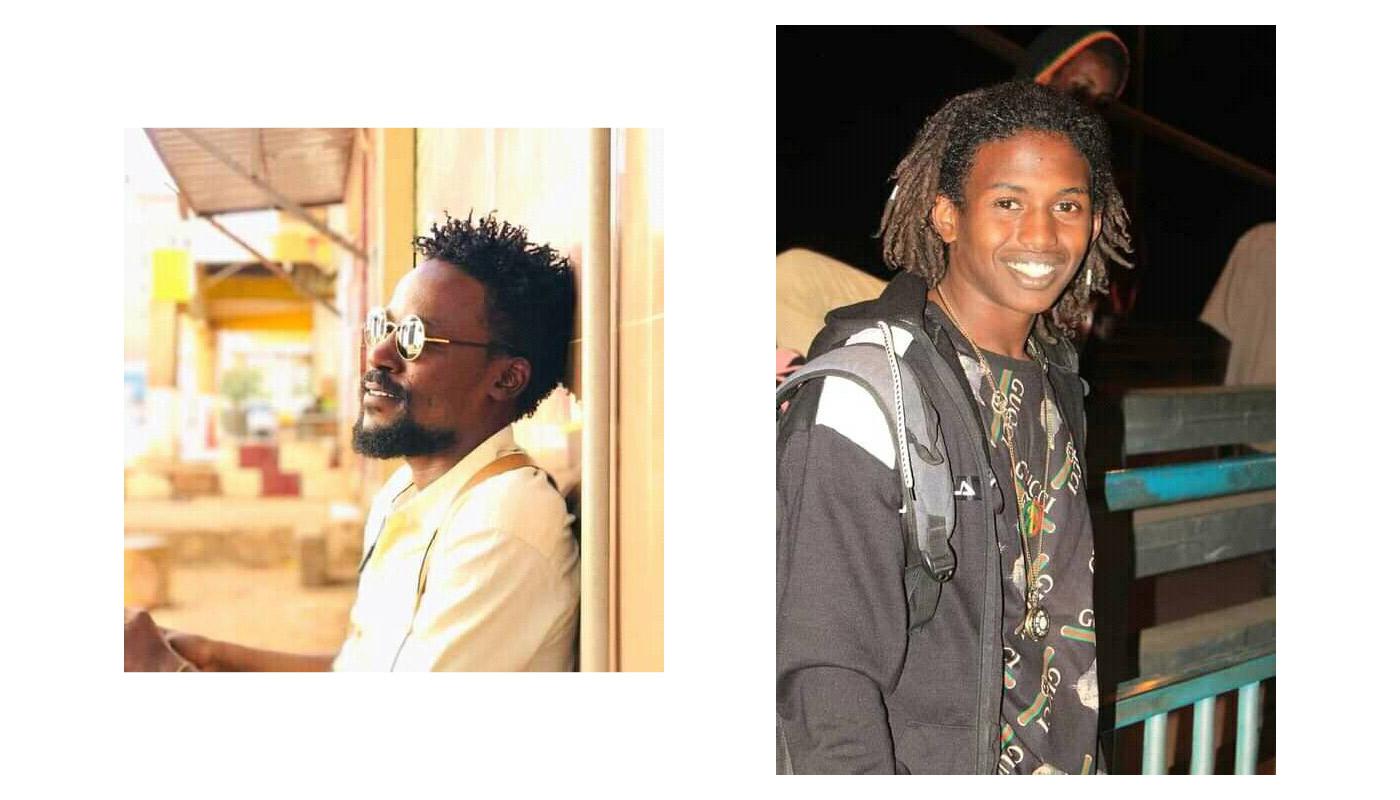 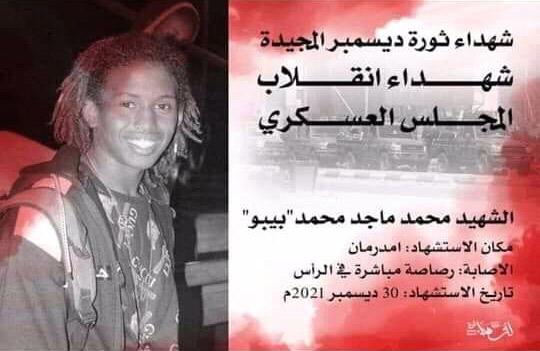 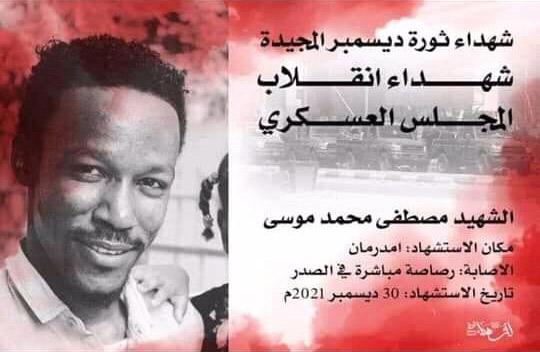 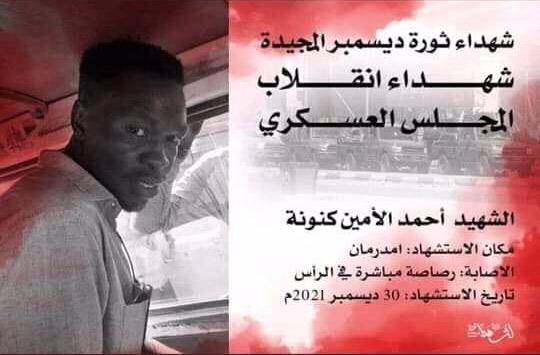 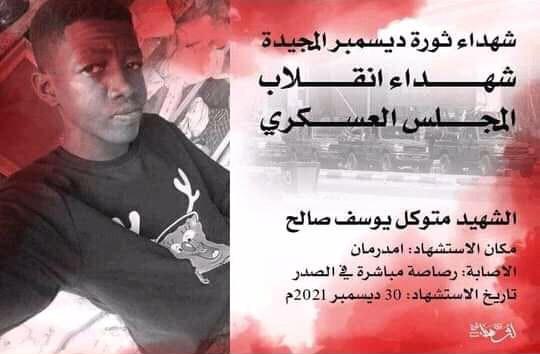 Injury: A gunshot to the head

Injury: A gunshot to the chest

Injury: A gunshot to the head

Injury: A gunshot to the chest


In 2011, the expression “soft landing” was used in Sudan to describe the proposal to offer Omar Al-Bashir a negotiated transfer to civilian rule, complete with some sort of amnesty for his war crimes. Since then, it has been usedto describe a proposed alliance between the regime and the opposition, in which the latter would stop attempting to overthrow the regime in return for sharing power, as well as to describe submission to US policy and the status quo in general. ↩

The Forces of Freedom and Change (FCC) is a coalition of civil society groups and political parties that has been organizing protests. It was part of negotiating a return to civilian rule with the Transitional Military Council (TMC). ↩

“الحاضنة السياسية”—roughly translated, “political incubator”—describes the role that the transitional government was supposed to serve in Sudan. ↩


The DShK is a Soviet-era belt-fed heavy machine gun. ↩</figcaption>