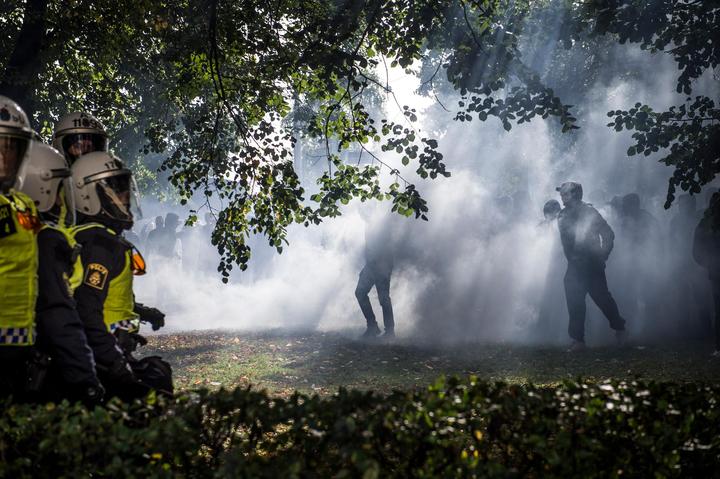 Today was a historical day in Sweden; a day where antifascists succesfully blocked a neo-Nazi march for the first time since the 90's. Nazis were kettled by police – forced by diverse mass militant action. We kept the fascists from even getting to their starting point. Today, we won. This victory shows that it is by staying together, being militant and uncompromising while remaining diverse that we are capable of victory. We did this. It is not a victory of the state and liberal democracy, but a victory of the movement – against the state and fascism.

With this said we do believe we can do even better in the streets. We need to develop and organise a militancy which to a greater extent prevents harm against comrades, includes more people and manages to hold lines against police better and longer. Practice makes perfect.

In the streets we saw a young girl arguing with an older woman who was harassing protestors for their militancy. In the end, the young girl shouted defiantly "It is I who am the future!" This image resonated with us. The future belongs to those us who struggle against state and capital and not those who would step over bodies to protect a decaying status quo.

It must be stated once again that it is the contradictions within liberalism that breeds fascist groups like the Nordic Resistance Movement. Capitalism is in decay and liberalism is collapsing back into it's authoritarian nature. "Free speech" has been the banner under which racists across the Nordic countries – and indeed the whole world – have poisoned the public discourse. Liberals believe it is fine to use massive amounts of violence, the violence of the state, to protect and defend fascists. This was evident today as well. Our victory over the fascists – from shortening the path of the demonstration in the courts to stopping it in the streets – was always based on both physically limiting them but also politically confronting liberalism.

We want to send our greetings to all comrades who struggled in the streets, who were beaten by police or was arrested, to all who came out in the streets and who stopped a neo-Nazi march. Today was a historical day. Today we won.