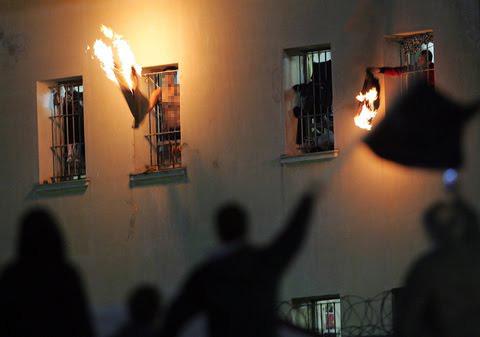 Solidarity Fund for Imprisoned and persecuted Revolutionaries from Greece

The “Solidarity fund for imprisoned and persecuted militants” from Greece was established in 2010. Since the start of solidarity fund, the most important purpose of this structure was to ensure decent living conditions for the imprisoned comrades, through a process that would take place within the political movement; thereby taking the material dimension of solidarity one step beyond family and close friendly/comrade relationships. Besides that, among the priorities of the people who are part of the Solidarity Fund, remain the practical solidarity actions, building communication bridges between people inside prison and those outside, and the development of united struggles inside and outside prison walls.

All these years of its existence, besides financial support, the Solidarity Fund also organizes political interventions with events, book presentations, publications and translations of books or texts written by prisoners. At the same time, all these years that the imprisoned militants have been struggling against vindictive punishments, solitary confinement, prison transfers and tortures with protests and hunger strikes, we have been trying to intervene with our word and action against the horror of incarceration.

Today, after 9 years from its establishment, the solidarity fund is currently supporting 18 prisoners and the 9 Kurd-Turkish prisoners*. All those years, every month, we are steadily sending them an amount to cover their needs inside the prison

So, it’s easily understandable that the number of 27 prisoners (18+9) multiplied with a few hundred € to each, adds up to an extremely big amount of money each month that we need to gather, in order to help them cover their needs.

Αpart from that, the solidarity fund is actively supporting other causes and covers other expanses too, for example, migrant struggles and prosecutions, various judicial costs from social struggles, squats and so on. Thus, to cover all those needs, we are asking for people to show solidarity and contribute to our cause.

We decided to use Firefund to reach people from all around the world, to establish relationships with comrades who fight the same struggle and to spread the message of solidarity everywhere possible and to reach for people who want to contribute to this cause. 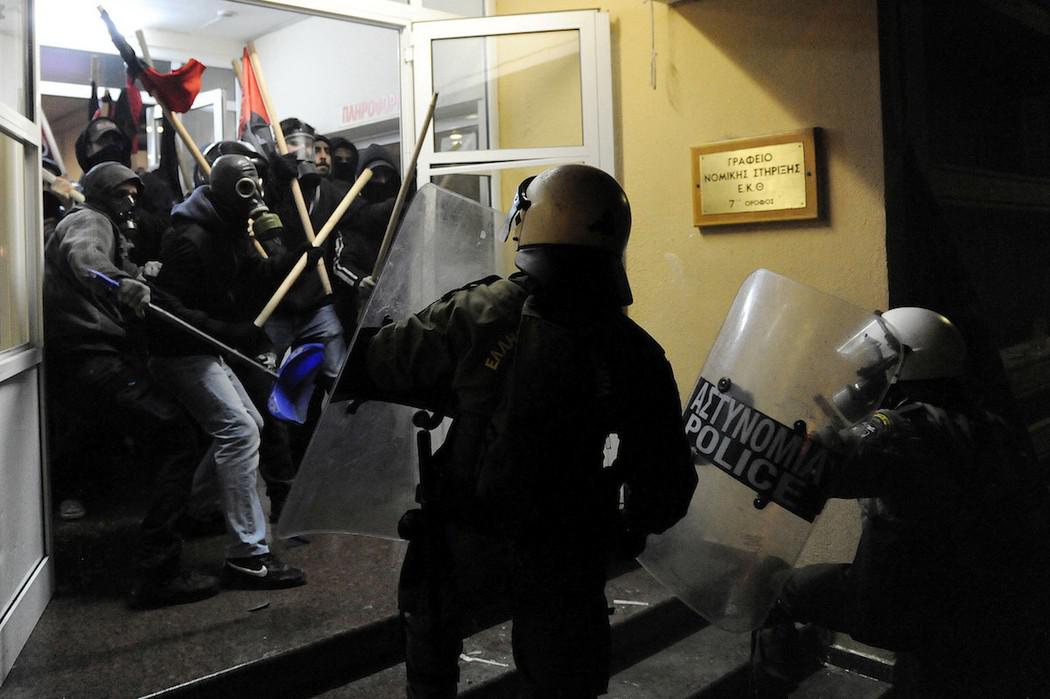 <figcaption>December 2015. From the clashes in support of political prisoner Nikos Romanos, who was on hunger strike for 31 days in total demanding his permits.</figcaption>

The Solidarity Fund for prisoners and persecuted militants is a nationwide structure consisting of individual assemblies in various towns. The assembly of each town operates autonomously acting and designing actions, events, discussions involving both political prisoners, and the issue of incarceration in the modern hellholes. Every three months members of these local groups meet at a nationwide assembly of the Solidarity Fund, which has a public character and takes place (cyclically) in one of the towns that constitute it. In this open assembly organizational issues and perspectives of the structure are discussed and decisions are taken regarding events, publications of books/magazines and actions that can support and promote its purposes. Decisions are taken in a horizontal and egalitarian way, beyond any kind of competition and hierarchy, within a framework of collective decision-making after the political ferment of the members, away from any practice of voting and delegation.

In our effort to meet the structure’s financial requirements, apart from the various publications we also carry out various financial aid events. However, this structure could not have survived without the support of individual comrades and collectives who perceive its existence and continuation as something necessary and indispensable. The support of the efforts of the Solidarity Fund, particularly from collectives, with their participation in the local meetings, or even through a regular and consistent financial contribution, is of vital importance. Furthermore, the support that’s coming from comrades abroad remains a very important one. This support both develops a sense of solidarity and interaction with collectives and organizations internationally and also substantially and actively helps the structure in its attempt to cover the daily needs of the prisoners. Therefore, a basic aim of its members is the maintenance and strengthening of international relations, in an attempt to network and even to collectivize the resistance, both outside and inside the prison walls. This effort includes communication and organizing of events abroad as well as hosting events and offering hospitality for comrades here (in Greece).

The structure of the Solidarity Fund supports people who struggle and are persecuted and imprisoned for their involvement in the social and class struggles, for their subversive action, within the spectrum of the multiform revolutionary struggle. It also supports comrades who end up in prison, charged with offenses that are seemingly not directly related to the social struggles, but their political identity and actions clearly identify them as part of the radical movement. Likewise, when the brutal state repression criminalizes friendly/family/companionship relationships, the human solidarity itself, we choose to support those people who stood with dignity and were targeted for these relationships. An essential and non-negotiable precondition for the development of a dialectical relationship of support is the refusal of cooperation with the authorities during the arrest and imprisonment as well as the recognition of a struggling community, far from any kind of hostilities and polemics within and against it.

At the same time it wouldn’t be possible to not stand in solidarity with specific cases of social prisoners who, while in prison, were associated with the revolutionary movement and continue to struggle and fight with dignity for better conditions in the hellholes, with all those who project the importance of interconnection of the struggles within and outside the prison walls. We also consider the political and practical support to migrants very important; in an attempt to downgrade the existence of the migrants itself, states systematically make them illegal and imprison them in concentration camps. In this direction we try to materially contribute to the various initiatives being set up and we seek to connect with respective structures. Because above all we are against any type of confinement and for this reason we will continue to fight alongside all those mentioned abov. 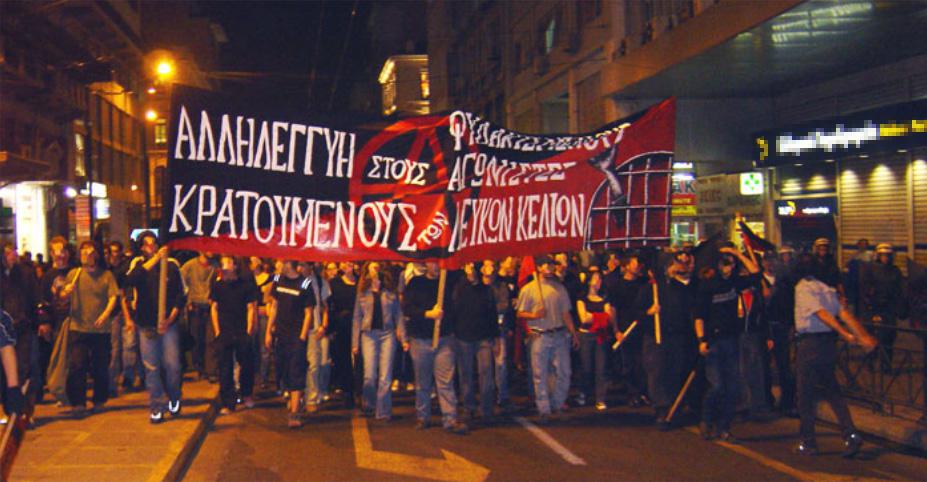 Athens 2004. Demonstration in solidarity with struggling political prisoners, some of whom were on a hunger strike

Finally, apart from the Solidarity Fund for the regular financial support of the prisoners, there is also a parallel Solidarity Fund, which as much as its (financial) capabilities allow, helps to immediately cover emergencies, such as court expenses and bails, provided the funds are returned within a reasonable time.

Today, some years later (since our establishment), we are once again called to read the conditions being created within a scene that is getting clearer and to reorganize the consistent support of the movement for the imprisoned militants with terms and targets equally clear. The capitalist restructuring expressed through an all-encompassing attack from those above against the entire range of social life of the country, seems to become permanent. It now becomes clear that regardless of the changes in the colors and the names of those who rule, the implementation of strategies that impose broad poverty, social cannibalism and state repression, is a one-way street for the world of capital and the inequality it produces. The fake hope of entrusting the “left” management is also annihilated. Those at the lower social classes increasingly understand the importance of their own organizing in order to manage -materially as well- the arising needs.

The revolutionary movement, of which we are part, seems to understand the limits of spontaneity that in recent years has nourished and brought us to the forefront, but remained insufficient to initiate a complete social change. It seems to become more mature and structured through organizational frameworks that correspond to a movement. So on the one hand we have the continuous and explicit effort of the privileged classes to impose even more inequalities and coercion and on the other hand the world of struggle that attempts its organized counterattack. In simple terms it is understood that the already large number of militants who are persecuted and imprisoned will remain unchanged -if not, it will be getting even larger- thus becoming a real issue to be addressed by the struggling parts of society that want to be called -and act- revolutionary.

After all these years, of the continuous persecutions and imprisonments, we consider the existence of the Solidarity Fund topical and necessary. Being one more stone in a mosaic being built by the multiform struggles against prisons, which urge us to act against one of the major pillars of the system of oppression and exploitation.

Up until the demolition of the last prison… 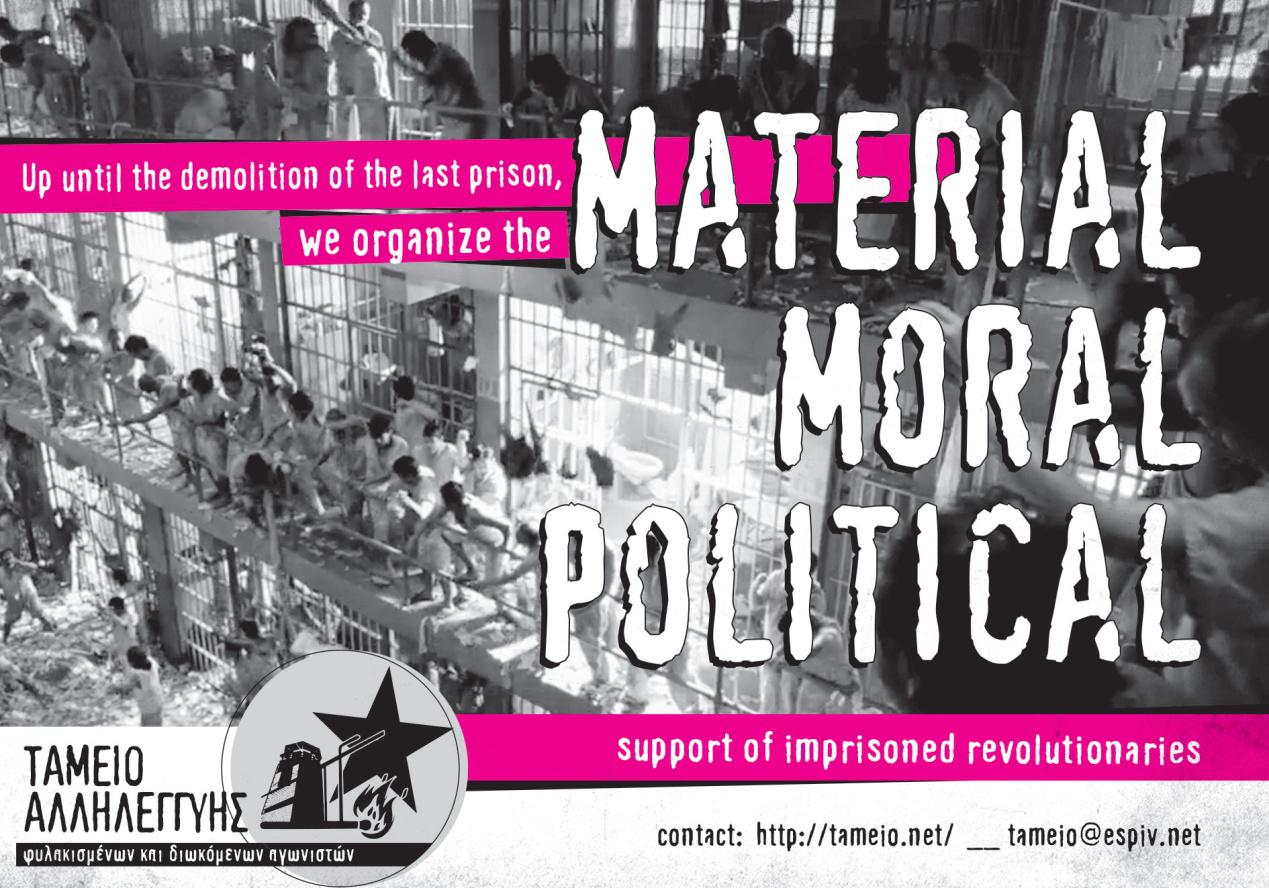 *The picture on the headline was taken during the intervention that we participated on New Year’s Eve (December 31, 2017)

Go to https://www.firefund.net/prisonsoli and give your donation!