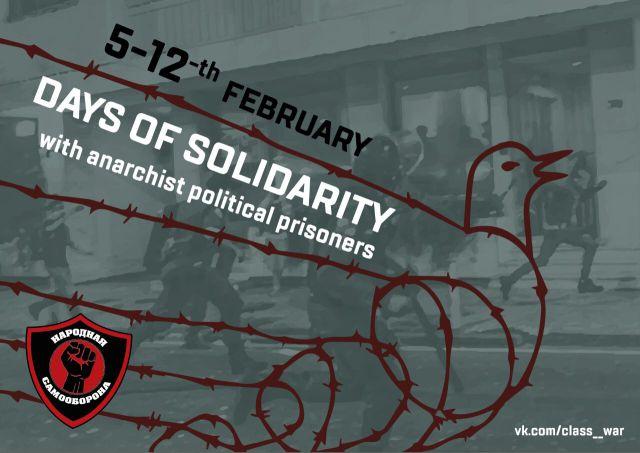 Days from the 5th till 12th of February are the days of solidarity with repressed Russian anarchists.

In October of 2017 in Penza six anarchists and antifascists were arrested by officers of Federal Security Service on a charge of creating a terrorist group. Moreover, in that time the period of raids in anarchists and antifascists’ houses has started all over Russia. The
objects of Security Service’s attention were different people from absolutely different towns. At last, a new wave of detentions was launched in January of 2018. An antifascist Victor Filinkov was kidnapped by Security Service in Saint Petersburg. The officers of
Federal Security Service have been torturing him in the forest out of the city. They told Victor to admit his participation in mythical anarchy-terrorist group. Unable to withstand the torture Filinkov was forced to incriminate himself and now he is remaining in Temporarily-staying Isolation. Filinkov’s lawyer claims that he has never seen so serious damages and trails of the torture during his practice of struggle with a police outrage.

There is another antifascist who has claimed about torture in St. Petersburg. Ilya Kapustin was also threatened by officers from FSS, but he has refused to incriminate himself and after that he was released on bail. There weren’t any proofs that anarchy-terrorist group exists in real life, only the confessions gained by the threats and torture.
Nevertheless, police is doing everything in order to force people to confirm an existence of mythical terrorist organization named “Net”, spoofed by FSS. The officers affirm that this organization has a lot of cells in every town. It means that the situation which has occurred in Saint Petersburg will be observed in the other Russian towns very soon.

In this case it’s necessary to show that we are not afraid and we can’t be destroyed by their force. Otherwise, the repressions will be used every time when the anarchist movement calls an attention of FSS. We should show them that the stronger their repressions, the more furious will be our resistance. Now it’s important to support the prisoners, to prevent the continuation of the “witch-hunting” and give a global publicity for this event.

We call you for a solidarity campaign with repressed anarchists from the 5th till 12th of February.

Arrange different street actions, evenings of solidarity, distribute information in the media and in the Internet. Do everything you can come up and implement.

The only one weapon we can counter the face of the state terror is the unity and solidarity with each other. Without these two things we will be crushed by this monster one by one.

We are ready to provide the space for publication solidarity actions, just send them on media_ns[at]riseup[dot]net

The address for your solidarity letters: to