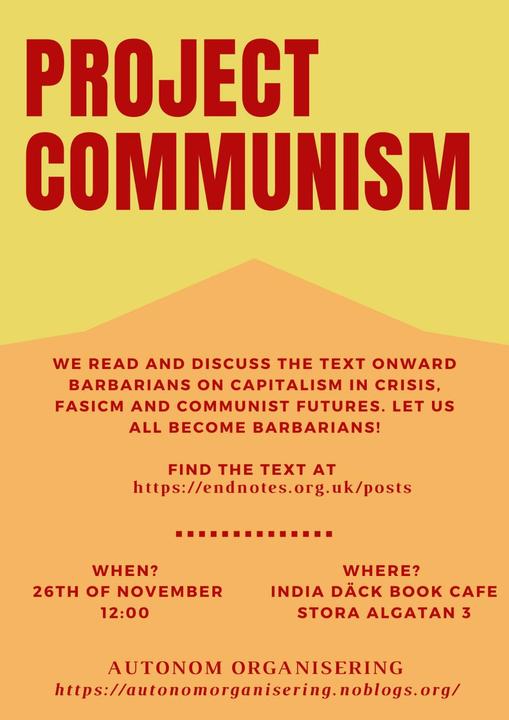 “The hungry dress themselves in yellow, and use the fragmented language of identity rather than class, because the whole framework of the left has collapsed. If a pragmatic anti-racism overwhelmed the performative kind during the George Floyd uprising, this is because the pragmatics of revolution no longer take its poetry from the dead world of ideologies. The revolution of the 21st century must let the dead bury their dead in order to arrive at its own content. Thus the task for a contemporary science of the species is to once more read the runes of our times, in order to understand how the non-movements themselves reveal the anti-formistic tendency of our period, and how, in their confusion, we can identify the eclipse of the social forms that we call capital, state and class. Since communism is the real non-movement that abolishes these social forms, we say to the masses who confront our tottering order — avanti barbari! — onward barbarians. ”

In this next installment of our study group/think tank/project we delve deep down into the movements of the modern age. Through the text Onward Barbarians by the Endnotes collective we want to open up a discussion about the big stuff: world revolution, fascism, the working class today and much, much more.

We want to, like the authors write above, move beyond the “dead world of ideologies” and recreate a communism for the 21st century. Not communism as calcified in the boring, dogmatic texts of the would-be orthodox priests of Marxism who LARP some strange return to a past that never was, but a communism which is reunderstood, rearticulated, reshaped. A communism which has issues of feminism and postcolonialism at its heart.

We have chosen Endnotes text because its look at how modern movements become ungovernable and how they create a theory of revolution through this. It also confronts the issues of global counterrevolution in the form of possible fascisms, a situation all too clear to us in present-day Sweden.

Come along then to this second installment of Project: Communism. There is no need to have been at the first one. We start out as usual with a close reading of the text to aid in understanding and from there move into whatever questions we want to pose.