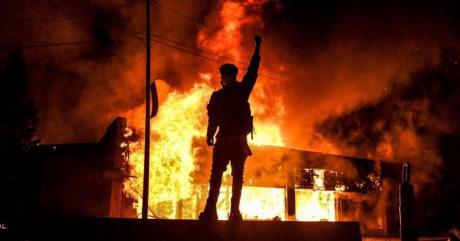 A compilation of arguments addressing some of the claims and conspiracy theories that have been circulating about "outside agitators" and "ANTIFA" in recent days. These were originally posted as social media threads by Crimethinc and It's Going Down. 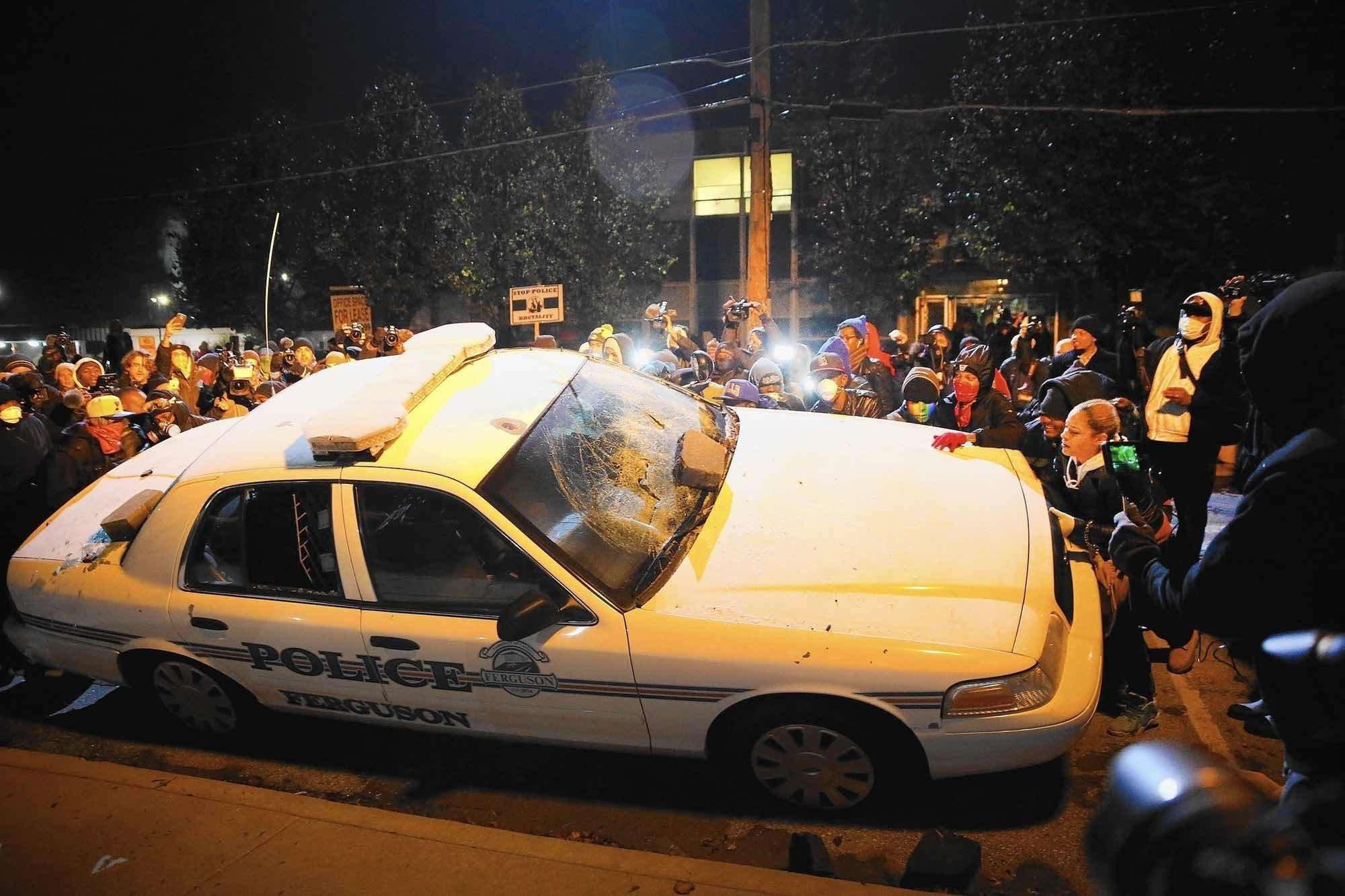 Systematic police racism and murder have been taking place countrywide for generations. When people suffer from the same oppression everywhere, it makes sense for us to come to each other’s assistance.
The word for this isn't "outside agitation." It is solidarity.
Can all of the tens of thousands engaging in confrontational protest be from "outside"? To maintain order, the authorities need to portray rebels as "outside" the movement. But this movement began from open rebellion.
If anyone is outside it, it's the ones trying to divide us.
Yes, there are real divisions and differences in privilege within this movement. But if we enable authorities to isolate any one group of participants as "outside," this will ultimately serve to weaken the movement as a whole.
Let's care for each other, listen to one other, defend one other from risk rather than gratuitously exposing each other to it, respect each other's autonomy, give other participants in the movement the benefit of the doubt—and attack the institutions that murder and oppress.

Conspiracy theories about agents provocateurs circulate whenever protesters do things—good or bad—that exceed expectations. Such rumors can obscure the more obvious things that are taking place. They also serve to distract us from our own agency—from what we can do.
The chief danger of spreading speculation about provocateurs is that it will endanger those who take greater risks, because others (liberals, reactionaries, or people with good intentions) will try to “unmask” them as cops—and consequently expose them to more danger from cops.

This is not to say that people never do bad things in the streets. In addition to police undercovers, people with reactionary politics or individual grudges or bad judgment can do terrible things we would only expect from police, like burning down Black-owned businesses. Rather than speculating when we have no information available (or only tweets from unverified sources) about who is working for the police, it’s better to focus on the consequences of the actions themselves, and have the necessarily political conversations about risks and goals.

Rumors that ascribe all significant actions to the state are second cousin to conspiracy theories that evil puppeteers like George Soros are behind all protest activity. They’re disempowering and usually circulate the most among people who lack on-the-ground access to events.

"ANTIFA", Black Lives Matter, and terrorism (It's Going Down):

Trump's calculated move to solidify himself as the "law & order" candidate by claiming the US will label "ANTIFA," a political stance against far-Right violence, white supremacy and fascism, a terrorist "group," mirrors similar efforts to do the same to #BlackLivesMatter.
"ANTIFA," which is only put in all caps by the grifter-Right and their followers, isn't an organization. Antifa, short for antifascism, is simply a political stance against fascism which can manifest in a variety of political and community forms of protest, organization and action.
Currently, Trump's advisors are divided on how he should respond to the uprising following the police murder of George Floyd. "...[Some] have said he should condemn the rioting and looting more forcefully or risk losing middle-of-the-road voters in November."
Trump and his backers have also doubled-down on presenting the wave of riots and demonstrations in the terms of a vast conspiracy theory - that they are all the work of "ANTIFA."
This isn't a new play - it's the same discourse and divided and conquer technique that was employed during the Civil Rights Movement, where the Klan and local police branded Freedom Rights "outside agitators" and "Communists."
During the Ferguson Rebellion, similar tropes of "outside agitators" were also repeated - however behind the scenes, the vast surveillance apparatus of the State was firmly directed at the Black community and local Black organizers themselves.
After the Ferguson Rebellion, a new threat was designated of "Black Identity Extremists," and was presented as a bigger threat than white nationalist or Islamic terrorist groups.
In 2017, documents showed "government surveillance of the Movement for Black Lives + Black activists. They show how federal agencies characterized protesters as “Black Supremacist Extremists” + portrayed First Amendment protest as inciting violence to justify surveillance."
"These documents also reveal for the first time the existence of a report produced by the DHS Intelligence and Analysis office called the “Race Paper” and that is entirely blacked out in reliance on the National Security Act."
Furthermore, as the Young Turks reported, the documents showed that the FBI "has established a program dubbed “Iron Fist” targeting so-called black identity extremists with undercover agents."
This "Iron Fist" program seems to bear a striking resemblance to COINTELPRO, or the Counter Intelligence Program, that sought to disrupt and destroy social movements in the 1960s and 1970s.
Under COINTELPRO, activists and organizers were set-up on charges, had their lives ruined, and in many cases, were assassinated by local police.
The far-Right has also played a role in pushing the State to declare grassroots movements as "terrorist." In 2016, a White House petition to label #BlackLivesMatter a terrorist group got over 100K signatures and was pushed heavily by the far-Right.
Petitions that receive over 100K signatures get a White House response, to which the then Obama White House responded: "The White House plays no role in designating domestic terror organizations," nor does the U.S. government "generate a list of domestic terror organizations."
A year later, and ironically right after the deadly neo-Nazi Unite the Right rally, white nationalist troll and Trump supporter "Microchip" started a similar petition to label "ANTIFA" a terrorist group. The White House petition also got over 100K signatures.
In response the Trump White House wrote: "Although Federal law provides a mechanism to designate + sanction foreign terrorist organizations and state sponsors of terrorism, there is currently no analogous mechanism for formally designating domestic terrorist organizations."
Two years later, Proud Boy leader + Unite the Right attendee Enrique Tarrio pushed a new White House petition to label "ANTIFA" a terrorist organization. This one was almost directly copy and pasted from the previous #BlackLivesMatter petition from 2016, changing only a few words.
This interchangeability between "ANTIFA" and #BlackLivesMatter as a boogeyman on the Right, both within the hardcore far-Right on the streets and within regular Trump supporter circles - says a lot. It shows that while the enemy may change, the need to have one stays constant.
Ironically, Tarrio's petition to label "ANTIFA" a terrorist organization failed to even pass 40K signatures - thus gaining 60K signatures less than it did right after Charlottesville. Even still, Tarrio found a backer of his petition in the form of Ted Cruz, who promoted it.
Cruz has rubbed elbows with the far-Right in numerous instances, speaking at rallies alongside the far-Right Oath Keepers militia and appearing alongside Proud Boys founder + contributor to white nationalist American Renaissance publication, Gavin McIness.
When they aren't working with politicians to label those who oppose fascism as "terrorists," the Proud Boys spend most of their time online, harassing journalists and attempting to shut down people exposing literal neo-Nazis and white supremacists.
It's been over 5 years since the Ferguson Rebellion. Since that time, 6 people associated with the activist community who were involved in the demonstrations have died, "some in violent, mysterious ways." Two young men were found dead inside burned cars.
In Ferguson, what began with police, media, politicians and even some activists attacking "outside agitators", over 5 years later has continued with a massive security State apparatus aimed directly at #BlackLivesMatter and the black community in general.
Neither "ANTIFA," anarchists, or any activist group for that matter, are behind or "directing" the uprising that is taking place across the US following the murder of George Floyd. Young people of color are the driving force - and this is exactly who the State fears the most. Image
People need to refuse to allow the government to separate, split, and break apart those in the streets - and those who sympathize with them - especially around racial lines - which of course is what Trump does the best.

Fake "ANTIFA" accounts (It's Going Down):

Far-Right trolls and white nationalists are promoting an obviously fake "ANTIFA" troll account calling for violence in "white hoods" in order to both scare the public but also whip up potential violence against ongoing George Floyd demonstrations from the far-Right. 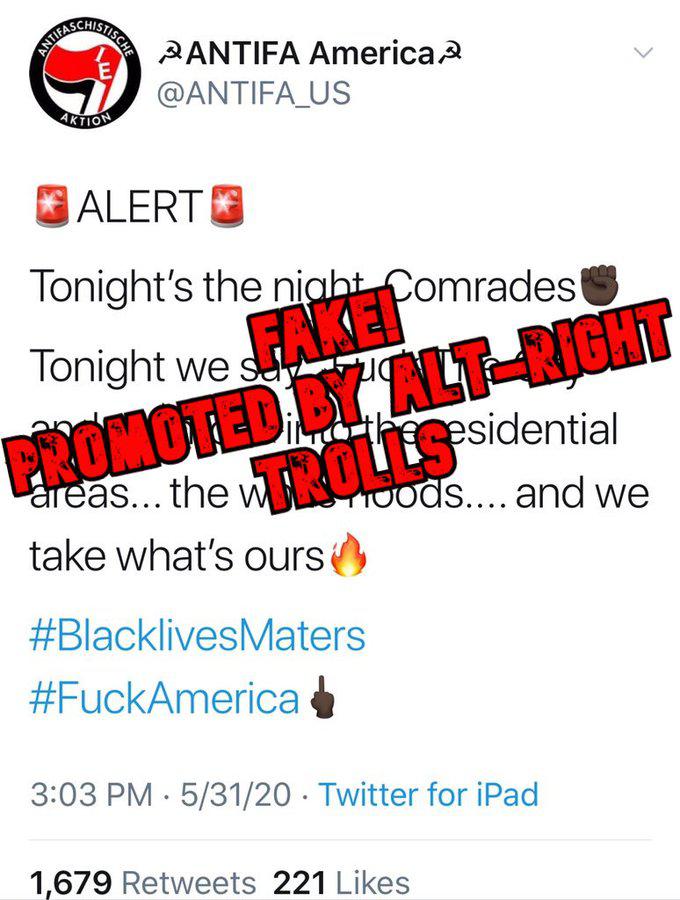 Fake "ANTIFA" (for some reason, the far-Right loves all-caps) Twitter and social media accounts have long been a tool of the far-Right in both attacking antifascists and encourage violence.

Example: when "Official Antifa," long-running fake account, promoted the lie that antifascists were going to vandalize graves of Confederate soldiers at Gettysburg (there are none). This false claim was then promoted by grifters like Jack Posobiec and Cassandra Fairbanks. 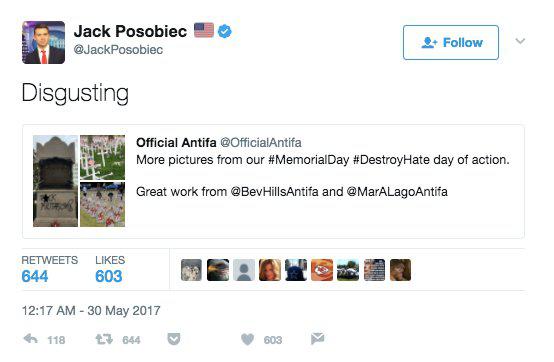 Ironically, this grift ended up pushing far-Right + white nationalist groups to mobilize in defense of a fraud. One militia member that ended up coming to Gettysburg to fight non-existent antifascists ended up shooting themselves - literally - in the foot.

Alt-Right trolls behind "Boston Antifa" also created a network of fake accounts, antagonized militia groups like the Oath Keepers to stir up potential violence, and also were promoted by Gavin McIness. In Texas, far-Right trolls also tricked a coalition of far-Right and militia groups into mobilizing to protect a Confederate statue by falsely claiming that "ANTIFA" and #BlackLivesMatter were going to pull it down.

Last year, in the lead up to a 4th of July Trump rally, a similar "ANTIFA" account created right before the event and promoted by racist grifters like Posobiec and Milo claimed that they were going to attack Trump supporters in DC.

Those on the Right have also used the boogeyman of "ANTIFA" as a scapegoat. In Virginia, "FBI reveals...Civil War reenactor in Virginia made violent threats [one, a pipe bomb] against his own organization and then pinned them on Antifa."

In January, Alt-Right trolls also created and spread fake antifascist online accounts which issued violent threats against rally goers at a gun rights rally in Richmond. Ironically, days before, neo-Nazis were arrested for plotting to shoot up the event. There is a pattern to all of these incidents: Alt-Right and neo-Nazi trolls create fake accounts and then spread disinformation. This disinfo is then picked up as a "scoop" by far-Right grifters and is then promoted as a real threat - which their listeners then take as real.

In doing so, the Right hopes to discredit antifascists, but also push their followers to engage in violence. Here's far-Right conspiracy theorist and Pizzagate pusher, Mike Cernovich telling Tim Pool about how he lies to his fans about 'ANTIFA' in order to advance his agenda. The video ends with him admitting "It's a cynical world, I'm a nihilist... I enjoy the absurdity of it all. If you're in my line of work and you're not an absurdist, you'd lose your mind."