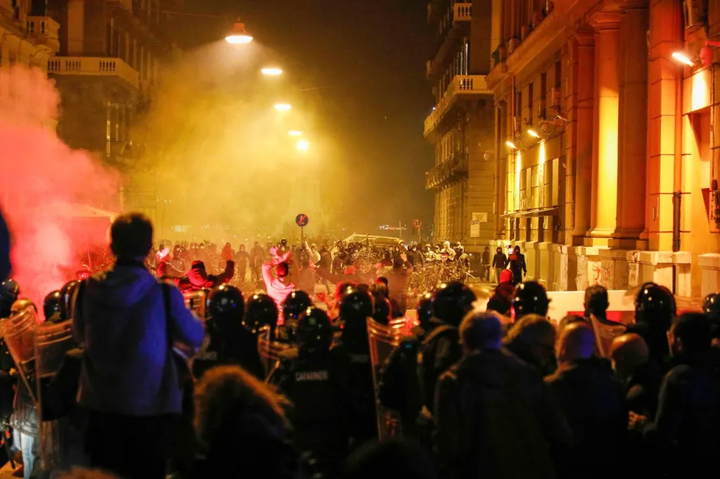 #Napoli: A night of #Revolt against the state of emergency and #curfew

In Naples, on Friday evening, thousands of people participated in a spontaneous demonstration against the renewed curfew announced by Regional President Vincenzo De Luca, followed by hours of street fighting and attacks on public buildings. In the media there was immediate talk of Ultras and fascists or even the Camorra as ringleaders, a claim that is strongly rejected by Italian comrades in the following statement, which appeared on info aut:

During the night we wrote about what was happening in Naples on facebook:

“During the night we wrote, red-hot, on Facebook about the events in Naples: “The tone of this night in Naples was perhaps excessively loud, contradictory, ambiguous, stratified like the society we live in, like its opposite. But in Naples the hypocrisy behind which the inability of those who govern us, the failure of this economic model in the face of the virus, the violence that those left behind have had to endure for months, was ruptured tonight”.

As expected, a media campaign was immediately unleashed against those who took to the streets. The smoke of the tear gas had not yet cleared as the political commentators were already putting forward hypotheses about the different directions of the Camorra and the fascists, suggesting the usual fetish of the Ultras, guilty of all the evil in the world, and linking yesterday’s protests with those of “No Mask”, although the message that was delivered on the square was quite different. And many of the polite leftists in this country have snuggled into this convenient racist and colonial narrative. A linear narrative that, without grasping the tensions, contradictions and instances of the protest from below, means: after all, they are the usual Neapolitans. Exorcize the revolt.

The problem is that every time there is an autonomous phenomenon of wider social conflict these days, whether it is the “movement of the pitchforks” or that of the yellow west, it appears in undesirable, ambivalent and contradictory forms. We often find people on the street who, at least in theory, are likely to have opposing interests, and even more often these contradictions are fought out on the street. So it is much easier to characterize them as a fascist phenomenon just because Roberto Fiore tries to become part of it with a tweet from his comfortable armchair in Rome, or as actions coordinated by the Camorra (it is not clear with what aim), than to try to understand them and participate in them in order to contribute to their development.

As someone rightly pointed out on Facebook, the mainstream narrative is quite similar to the one we had a few years ago in response to the waste disposal emergency: The responsibility for the crisis is handed over to the population, which, worried about their own health, rebels against the incompetence and corruption of institutions and private companies (see Healthcare), and finally, the infiltration of organized crime in the protests magically appears in order to delegitimize them and reduce them to a delinquent phenomenon. An already familiar script that is repeated whenever people do not adapt to emergency management from above.