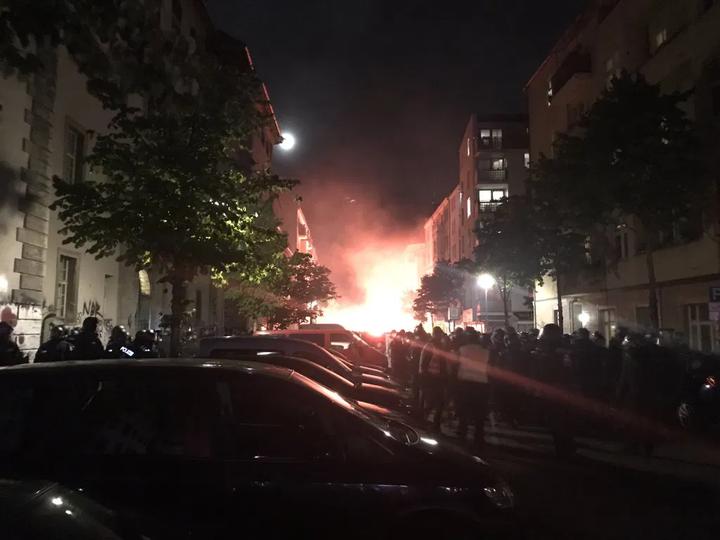 Berlin. An anonymous contribution on Indymedia DE reflecting on the current situation of Liebig 34.

Originally published by Indymedia DE. Translated by Enough 14. Image above by @t4mike_berlin.

The sun is laughing, but the nice appearance is deceptive. Until Friday, it was too calm in Friedrichshain’s northern district. Yesterday, after days of tense calmness, the first demonstration of the state’s violent potential. On the occasion of the demonstration on Saturday evening for the Liebig34, which according to the mobilization should have had a very militant character, the police drove more than a dozen of their own and external units to the demonstration. Dog teams and technical units were also present. On our side, there were well over 2000 people who marched in a police cordon, wedged in front and at the back, through the northern district, passing Rigaer94 and Liebig34, and then on an increasingly strange route into no man’s land between the Velodrom and Friedrichshain Volkspark.

It felt like the cops lurked for every movement. Two days ago they announced that they would call in special forces from the LKA6 if the situation became more serious. A hint to the fully automatic weapons of the SEK, a threat against those who understand the defense of the Liebig34 as a political necessity. It is part of the constructs of state security, which have been intensified by the media and speak of the brink of terrorism. This is shown by a Kalashnikov vodka bottle on a blurred solidarity image in front of the Rigaer94 for Terra Incognita that was evacuated in Thessaloniki: a mistake. Although this is not significant these days in view of the determined individual case (German police is under pressure from civil society for dozens of groups of far-right cops but the cops speak about “individual cases”, Enough 14) apparatus of the Berlin police, it is symbolic of the danger that the 30-year-long – rather gun-poor – resistance is reduced to folklore in these serious days of oppression. Just as the militant expression of yesterday’s demonstration presented itself mostly in fireworks from the roofs of the embattled houses, because the seriousness of the situation has apparently not yet burned itself into the collective consciousness. This is not to say that there should have been riots. But if the historical housing struggle in Berlin and the years to come are not aimed at shaking the state and triggering a general revolt and revolutionary processes, then in the end everything was nothing more than a pyrotechnical show. But the processes and events around Dorfplatz should not be talked down. On the contrary: to recognize their true meaning and to evaluate them independently from the medial hype is the key to success.

We should not complain about the coming martial police operation, after all, it was always about more than just the question of living space. The fact that our struggle next weekend threatens to suffocate in the massive mob of cops is the result of the fact that we managed to communicate the importance and possibility of confrontation with the state. We certainly made many decisions in the process that must be criticized in review, especially in the much discussed relationship with the surrounding neighbors. Nevertheless, we stand by our mistakes as well as our mostly correct and deliberate decisions. So when we complain, we do not complain about the media smear campaign or the omnipresent police violence against our rebellious structures, but at most about the passivity of those whom we reach out to every day.

What we have achieved has always been in defiance of repression and not because of sympathies or good will in the state apparatus, as the bourgeois press has claimed in recent weeks. From this point of view, the eviction action against the Liebig34 is not a peculiarity in how we are treated, but rather the result of the strategy of red-red-green (Goverment coalition of the state of Berlin), who together waited patiently for four years for the judiciary to issue them the necessary certificate of legal security to damage our resistant structure. The fact that Liebig34 doubts the legality of the eviction order does not change this. The eviction operation has long since begun. While the uniformed forces made themselves rare in the neighborhood last week, there was a permanent patrolling and scouting of the area by undercover units. A Red Zone around the Liebig34 was planned for the coming weekend and was announced with the help of the media as a given, as was the expected police presence and the predicted intensity of the resistance. Yesterday’s demonstration was also planned by the police in the context of the overall escalation and therefore had to suppress symbolic acts from our side in the bud. The alleged clashes on Dorfplatz in the evening were nothing but one-sided brawls by the cops, in order to realize the “feared” escalation to justify the heavily armed deployment of special forces with the help of police departments and daily newspapers. This is a fundamentally planned operation, the basis of which is their fear of an escalating conflict.

Our task now is to make this fear come true. To do so, we refer to 30 years of lively history, which firmly rooted us in this city. Mainzer Straße, Kreutziger Straße, Liebig14 and Rigaer94, which has been successfully defended several times, are the forerunners of the fierce battles that await us. Despite every eviction, this story was written by us, and so no one will ever be able to cover up the truth about the eviction operation against Liebig34. That the state is shaping the city with all its power in the spirit of capitalism.

Despite all contradictions, antipathies or indifference, the entire resistant potential of this city will unite around Liebig34 in these days and in its struggle will let its own utopia appear in bright light while the state is only able to spread its dystopia with the help of fear and terror.