Interview: Anti-fascist author Shane Burley on the far right speakers that are coming to Finland 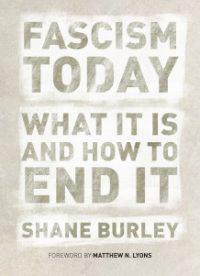 On 6th of April 2019, an international far right conference named Awakening will be organized in Finland. The aim of the Awakening conference is to spread ethno-nationalist, identitarian, white nationalist and other neo-fascist ideas to Finnish far right. Also the metapolitical aim of the conference is to influence more mainstream right wing and conservative politics in Finland having already succeeded in turning the youth organization of the Finns party towards more ethno-nationalist politics. The conference is organized by neo-fascist groups such as Suomen Sisu(“Sisu of Finland”) and Sarastus (“The Dawn”). Most speakers of the conference are coming from abroad, including the representative of the infamous paramilitary fascist Azov movement which sees their participation in the Ukrainian civil war as crusade for “White Races of the world” and several leading White Nationalists from USA.

We contacted Shane Burley in order to better understand who these white nationalists from USA are and why they are coming to Finland. Burley is a journalist and author from USA who has written extensively about fascism and anti-fascism. He recently published book called Fascism Today. What It Is and How to End It and we highly recommend everyone to read it.

Hello! Could you briefly introduce yourself for the Finnish audience and also tell what you have been up to recently?

I am an author, filmmaker, and organizer based in Portland, Oregon. I am the author of Fascism Today: What It Is and How to End It (AK Press, 2017), and I write for a lot of places about the rise of white nationalism and how to organize and fight back.

This week several people active in the international fascist milieu are coming to speak in Finland at Awakening conference organized by the local far right. Awakening seems to be directly inspired by events like American Renaissance Conference and National Policy Institute conference. Could you tell more about them? Why are they organized and what is their role for the American far right?

These conferences are intended to give the far-right a veneer of academic respectability. American Renaissance is a “race realist” or “human biological diversity” conference. Both of those terms are euphemisms for scientific racism, focused heavily on pseudoscientific claims about race and IQ, crime, and sexual behaviors, as well as a focus on propping up European nationalist leaders and white identity.

The National Policy Institute is similar, but more culturally focused, and has attempted be sort of the “Frankfurt school” for fascism, focusing on cultural struggle, identity, and clever branding. All of them are trying to make white nationalism appear as a deep philosophic current rather than guttural bigotry.

Awakening was organized for the first time in 2018 with these guests from USA: Francis Roger Devlin, Greg Johnson ja Paul Ray Ramsey (RamzPaul). Could you tell about these people and their politics?

Francis Roger Devlin comes, to a large degree, from the “manosphere” and attempts to use pseudoscience about evolutionary psychology to argue against feminism and for patriarchy, particularly the role of monogamy. Greg Johnson is the white nationalist who runs Counter-Currents publishing, a book house that focuses on “high brow” white nationalists, including books on fascist and “traditionalist” spirituality, literature and art, and leading theorists like Savitri Devi and Jonathan Bowden. Johnson is an erudite person with a philosophy PhD and wants to make white nationalism a more academic affair and influence American culture through the areas of high culture. RamZPaul is an internet celebrity who does campy videos criticizing modern culture, usually from a far-right bent that makes him focus on LGBT issues, feminism, immigration, and egalitarianism. They make up part of the inner circle of the Alt Right’s thought leaders. 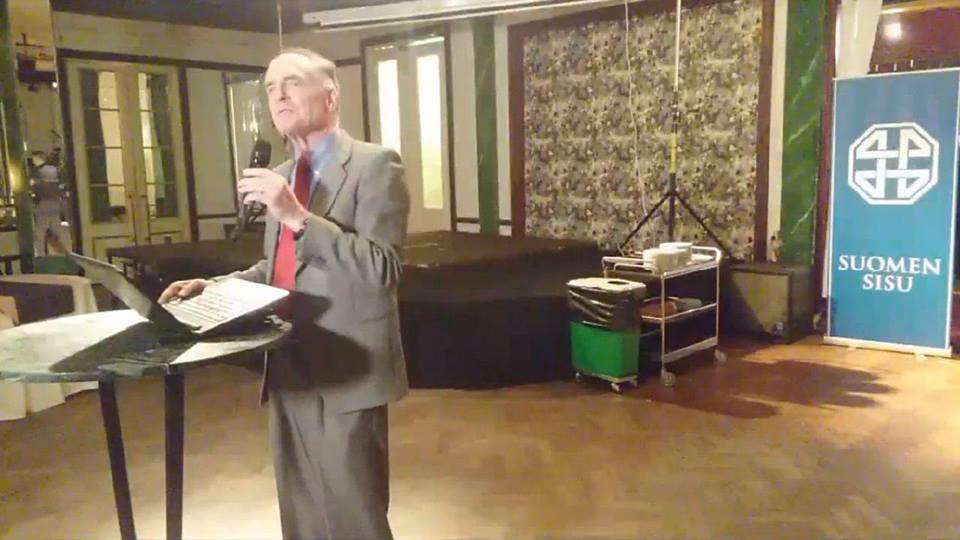 Jared Taylor speaking in first Awakening conference in Finland 8th of April 2018. On the right the banner of neo-Fascist group Suomen Sisu.

Also this year, speakers include guests from U.S. One of them, Jared Taylor, was supposed to speak in Finland for the second time but last week he was banned from Europeand won’t be speaking in Awakening. Kevin Macdonald is speaking for the first time. Also Greg Johnson is coming again but this time only to network and sell his books from Counter-Currents it seems. What is your view about this and could you tell who is Kevin Macdonald and what are his politics?

Kevin MacDonald is a leading white nationalist figure in the Alt Right because of his academic credentials. His main contribution is a theory that Jews created Judaism as a “Group Evolutionary Strategy” to outcompete non-Jews for resources. He believes pseudoscience about race and mental faculties, and believes that Jews control all world institutions through their “high verbal IQ” and that they create social ideologies as a way of manipulating whites into working against their own ethnic interests. He uses a lot of academic language and his work mimics academic texts, even if it is wholly rejected by other academics in his field.

Why do you think white nationalist from USA are coming to this kind of event all the way to Finland? They are also touring other Nordic Countries (especially Sweden) and also Baltic Countries (Estonia and Lithuania).

They desperately want to create a cross-European alliance, to focus on the white race broadly rather than what they see as petty ethnic nationalism. They also see the rise of nationalist parties, particularly in Eastern Europe, as more advanced that where the white nationalist movements is in America, so they want to build those bonds. They also fetishize Europe in a way, so they want to spend as much time mingling with actual Europeans as possible.

How have anti-fascists in USA responded to conferences organized by this kind of suite and tie fascists?

The primary way is to try to get the event shut down. This is called “no platforming,” refusing the fascists any space. Their speech is an attempt to organize, and their organizing leads to violence, and so disrupting their events is effective counter-organizing. This can happen by pressuring the venue owner and creating disruption in the lives of the people. With people coming to Europe from the U.S., doing large public campaigns revealing who these people are can get them blocked from entry.

I should add that they actually were blocked from entry, and this results from the fact that European countries are generally more sensitive to white nationalists from the U.S. coming in an creating disruptions. They are kicked out of European countries regularly, such as when Viktor Orban famously booted Richard Spencer from his “identitarian” conference in 2014. This will continue to happen if antifascists make public campaigns before they arrive, which stops them from even having a chance to get in the door.