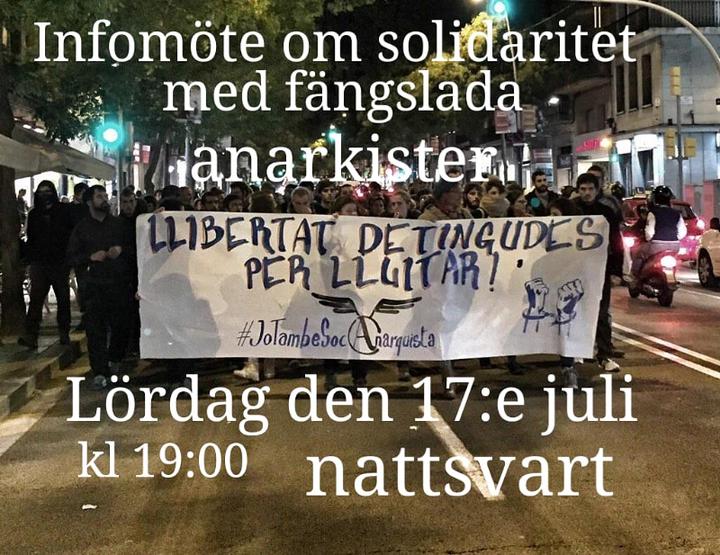 IN SOLIDARITY WITH THE 8 ANARCHISTS ARRESTED IN 27F IN BARCELONA, AND WITH PABLO HASEL For his song lyrics, on March 2017, the prosecution requested a further sentence of two years and nine months against Catalan communist rapper Pablo Hasel, for crimes of “slander and insults against the Crown” and insults against State institutions. More than 300 Spanish artists from different cultural disciplines had signed a manifesto supporting the rapper’s freedom, but the National Court dismissed the appeal. On February 16th 2021, Hasel was arrested at the University of Lerida. Amnesty International stood by the side of Hasel and the Strasbourg European Council condemned the Spanish government for violating the freedom of expression- “a crucial and necessary right for a free and pluralistic public debate”. On the day of Hasel’s arrest, a wave of mass protests began in numerous cities and lasted two weeks. 200 people were detained and around 200 were injured in altercations of police violence. The protests began as a social movement for freedom of expression but ended up assuming more and more the voice of general dissent towards the historical period in which we are living. A suffocating reality characterized by institutional violence and unprecedented social control that leaves the majority of the population without a future and that acquits and defends the usual criminals: police, politicians, and the royal family. 27February : 8 anarchists arrested On February 27th 2021, 8 anarchist comrades* from Italy, France and Spain were arrested during the riots in Barcelona stemming from the protests that have been taking place since the arrest of Pablo Hasél on February 16th. The detentions happened as a result of a vehicle being set on fire which belonged to the riot police of the Guardia Urbana of Barcelona, a police force that has a long history of torture and indiscriminate violence against migrants and homeless people and which the mayor of Barcelona, Ada Colau (Barcelona en Comú) promised to disband during the 2015 municipal elections. However as we can see, they are still there. The serving judge of the 17th Court of Barcelona charged them with belonging to a criminal organization, attempted murder, participation in an illegal demonstration, resistance to state authority, damage to property and disturbance of public order. There was no presumption of innocence, and the testimony of the mossos d'esquadra (Catalan police force), was reproduced in all the media, repeating it and assuming it as the sole truth. Since then there have been two court hearings in which it has not been possible to prove that the accused were guilty of any of the charges. In fact, one of the main accused of “attempted murder” has been released becau se it was demonstrated in the judicial expertise that the accused had nothing to do with the charges she was facing. So far, only two of the defendants have been released (in provisional liberty) and pending further trials, while the other 6 are still wait ing in prison indefinitely due to the risk of flight, since they are not of Spanish nationality. Despite the differences with other European countries, laws are being applied that remind us of the Gag Law passed in the Spanish state in 2015. All of them ju stify these repressive actions and are being reinforced by the measures imposed against Covid. While fascism alongside liberalism is running wild, any kind of protest and social organization is being banned. In the face of attempts to silence us, our best weapon will always be solidarity . Freedom for our anarchist comrades* and all those repressed.