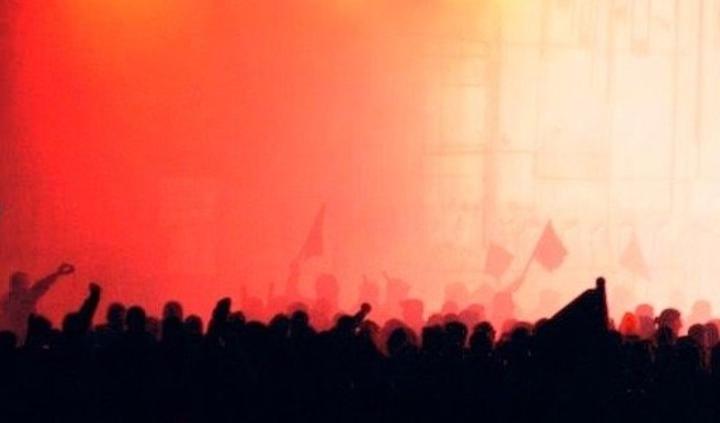 Financial support for the persecuted antifascists in Greece

On 1.11.2019 an arson attack took place at the Golden Dawn’s central office on Deligianni street, as a result of this action a lot of damages were caused to the second floor, where, among other things, the political office of the G.D’s General secretary was housed.
This fact was the reason to begin an expedition of targeting and prosecuting combatants of the antifascist movement. An expedition which culminated with the arrests of two combatants and the machinations of the police, which pursued against them, aiming to their detention.

The upgrading of their indictment from the Greek police and the reportorial leaks of the days, created a certain mood of detention of the two combatants, forming a tremoral environment, in which the comrades, their lawyers and the solidarity movement were called to give an unequal battle.

More specifically the suppressive mechanisms of the state accusations for felony charges begin in March 2017 with the attack at the central offices of the Golden Dawn’s fascists in Athens.
According to the scripts of the paper book up to the time of the last attack at the new offices in Athens in November 2019, six more actions, in total, were accomplished against structures and people of the fascist formulation.

In this way they tried to cut off selectively assumptions of political responsibility through a galaxy of antifascist- anticapitalism actions, which leaded, among others, during the last years to a significant decrease of the fascists.
The enforcement services, with a casual preparation of the case, tried to direct the existence of an organization to charge with decades in prison the two combatants of the radical movement.
The exaggerated and groundless indictment, which was compiled among others with anonymous phone calls, includes lies and exaggerations, which are dismantled only by reading once the paper book.

At a mere coincidence when the conviction of the Golden Dawn’s criminals comes to an end and the district attorney suggested the innocence of convicts for the murder of antifascist Pavlos Fissas ,degrading and legalising the raw violence of Golden Dawn in cases against syndicalists and emigrants. Without hesitating among other things, to mention the logic of their innocence which at some points reminds more of the charge of political responsibility for the action of this political party, that at least they gave some food to Greeks.
At a coincidence when the government of New Democracy shows its aggression against the poor and those who do not obey through evacuating squats, humiliations and tortures at police stations and the neighborhood of Exarcheia.

With ordinances and bills which immediately suppress the right to strike, to protest and the university asylum, the ND’s government attempts, just in few months of governance, to take back everything that has been won through decades of fights with a huge price and sacrifices from the struggling part of the society. The government conducts an all-out attack on everything socially vested by executing a political civic genocide on refugees and immigrants, while at the same time builds an Orgouelian racist and authoritatian type of police state conducts in monitoring combatants and political places, fabricates prosecutions and indictments, opens files on combatants, aiming to eliminate resistance and investing in the conservatism and the fear of the society.

Under these circumstances our comrades were leaded, with a inaccurate and lame indictment, to the inquisitor and the public prosecutor to defend themselves for the crime of remaining a fighter, imposing them with extremely strict terms such as mandatory occurrence to the police station of their region and the payment of 15.000 € bail to each one of them (total: 30.000 €) until 17/1/2020. In this way, it’s clear that the financial bloodletting of the fighting movement constitutes a future-proof aim of the system and a basic tool gunning for its extermination and enervation.

The kinematic self-defense facing the imperious and vulgar neoliberarism, which uses fascism to shatter the social and the class resistance, constitutes the existential position of the struggle for a better world. It constitutes the combat mode of the oppressed all around the world and one of the main means of assertion in their quiver. Because the organized expression of the class anti-violence forms the only possibility to victoriously standoff against capitalism and state repression. Because the antifascist antiviolence isn’t judged in the residential courts and it’s not legal or illegal. It’s bounden and timelessly fair.

Under these circumstances, we call forth all the people of the struggle to support this attempt to collect the 30000€ for the bails until the set date, so that our comrades won’t be held in custody.
This is the next battle we have to give facing the restraining mechanisms, which try, through the failure to pay the exorbitant cost of the bail, to detain our comrades.