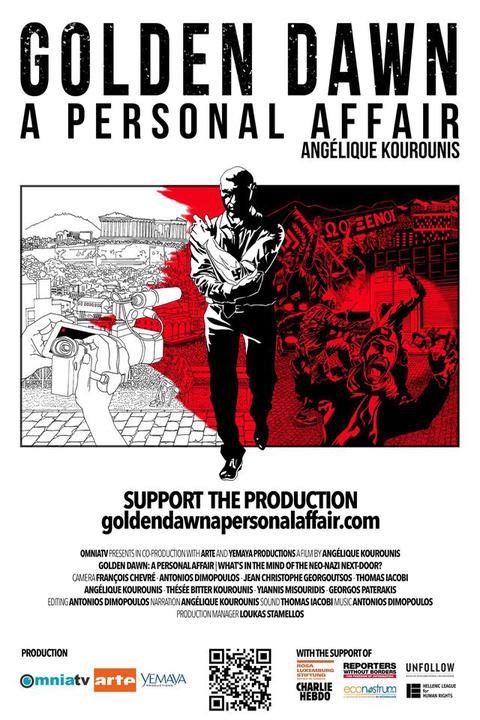 What’s in the mind of the neo-nazi next-door?

A film by Angélique Kourounis

Screening starts at 18:00 and discussion will follow in english, with a possibility for swedish translation.

A journalist is delving for years into the organization of the Greek neo-Nazi party “Golden Dawn”.

The financial collapse, the political instability and the family relations are placed into the spotlight as the documentary is trying to discover “what’s in the head of Golden Dawners, who pose as victims” of the system.

Golden Dawn “never hid” its ideology. Its influence in the polls might have been almost nonexistent previously, but the compatibility of this ideology with unshakeable beliefs in Greece – cultivated by many clergymen and most of the Media and political system – is the fertile ground on which the organization flourishes.

The director is looking into the matter through her personal obsessions, her concerns and fears, after dedicating many years and another two television documentaries in approaching the neo-Nazi party, which has taken the third position in Greece’s political system after three decades of obscure but bloody activity.

A discussion will follow on experiences of antifascist struggle in greece, the trial of GD as a criminal organization and the connection with european and western politics.

Entrance underneath the stairs of Hagabion – 2 stairs up – room 303.
The intercom is broken, call 0737-328912 and we will let you in.
There is also an elevator (let us know if you need to use it when you call and we will help you).
OBS!
At Syndikalistiskt Forum cash is queen (no card, no swish)!

Due to that our room is small it is important that you regard your health when you visit us. If you are healthy you are more than welcome, however if you feel unwell – with any symptom – we ask you to stay at home. This is to prevent the spread of infections. We reserve the right to send home visitors that are ill. Take care of yourself and remember to wash your hands. Also take care of each other the best way that you can! Don’t stock, try not to panic, support those who are ill, at risk and the elderly as good as you can.
This too shall pass. The struggle continues!

Do you have any questions or do you want to organize yourself with Syndikalistiskt forum? Send us an e-mail to info@syndikalistisktforum.se