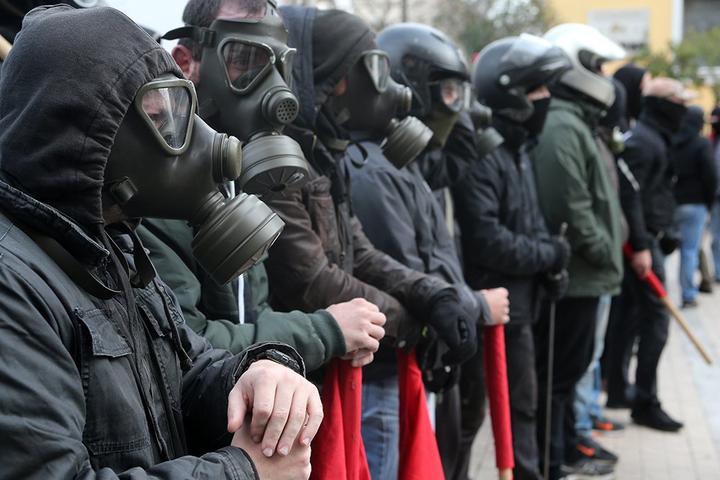 After the fascist attacks on self-organized squats during a nationalist rally in Thessaloniki last month, comrades in Athens were on high alert over the weekend during a similar nationalist demonstration. The dispute about the name of FYROM between Greek and Macedonian nationalists is leading to an aggressive nationalist agenda in both states. Fascists attacked the self-organized space Empros yesterday, but antifa activists were able to repel the fascist attack. Cops attacked an office of Antarsya but this attack was also repelled.

Everybody in Greece knows that these fascists attacked 2 social centers in Thessaloniki last month, the Libertatia squat was burned down during these attacks. Still the participants in yesterdays nationalist demo in Athens didn’t see a problem in marching together with the fascists.

The well known composer Mikis Theodorakis started his speech on the nationalist demo with: “My beloved Greeks, fascists, nazis, anarchists and others”. That was an answer to who critized his appearance on the nationalist demo as reactionary, especially the leftwing critics. The position of Theodorakis remained the same: In a diplomatic solution to end the dispute between Greece and FYROM about the name of the FYROM state the name Macedonia should not be included. Theodorakis attacked the current government and the minorities that support them: “We are not nationalists, but we are all patriots” is the sentence that was quoted the most in social media. But that wasn’t enough. He also said: “The worst fascism always was left-wing fascism”.

The current nationalist mobilizations are an ordinary power struggle between Greek elites. An attempt to remove the Syriza government and its not surprising that the main motors of the nationalist mobilzations are the conservative party Nea Demokratia, the church and the fascist Golden Dawn party. Our anti-authoritarian comrades don’t have a problem when the current Syriza government would be removed, but of course won’t support a campaign which goal is to replace the current government by a conservative government with a strong nationalist agenda. But yesterdays nationalist demonstration wasn’t a success, although conservative TV stations like Skai mobilized for the demo the expected one million people didn’t came. That didn’t bother the organizers of the demo. Many people fantasized about the numbers of the nationalist demonstration. One million, 1.5 million…. In reality more than 100.000 people took the streets and marched together with Golden Dawn and other fascist parties and groups in Athens yesterday. The cops stated that 140.000 people attended and released a video (below) to to back up their claim.

On Saturday there was an antifascist demonstration and people started antifascist patrols in several neighborhoods in Athens. The fascist Golden Dawn party could not gather on the square where they wanted to held their fascist rally because of antifascist counter protests. A couple of hundred fascists had to gather in front of the Golden Dawn party office in central Athens. In the night hours cops attacked an antifa patrol on Monastirkai square on Saturday night (video below). 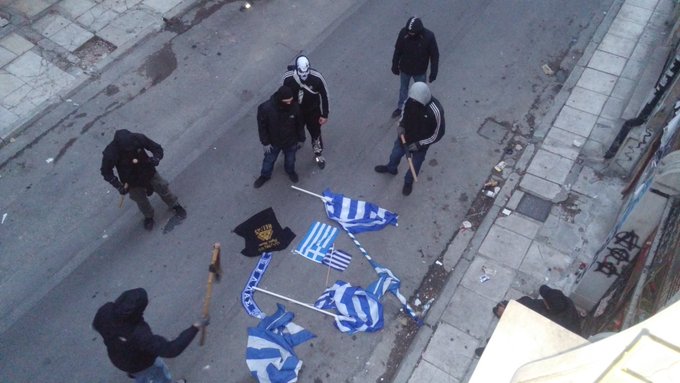 Antifas around the material that nazis left proudly behind.

Cops attacked people who were guarding an office of leftist party Antarsya, but this attack was also repelled by antifa activists and the cops had to retreat (video below).

It was a bad and a good day. It was bad that again more than 100.000 people took the streets for a nationalist agenda. It was good that our comrades managed to repel attacks by fascists and cops. 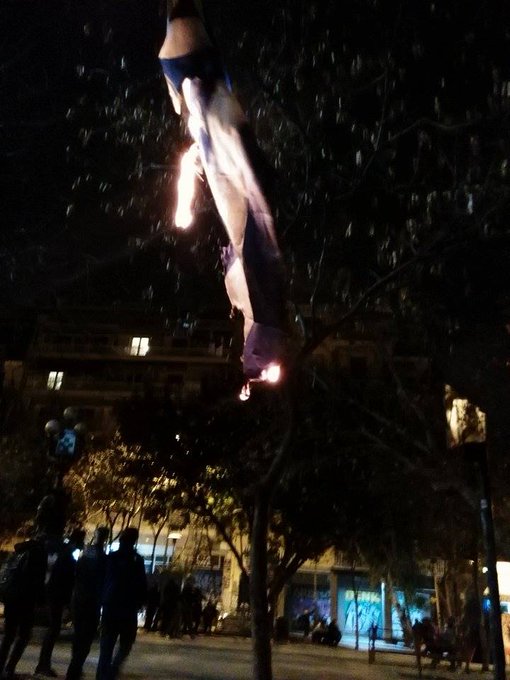 The antifa night in Exarchia was lighted by a greek flag on fire... The fascists were demolished in <u>Athens</u> today by an organized, determined, multi-formed and militant antifascist movement! Athens a nazi-free city! 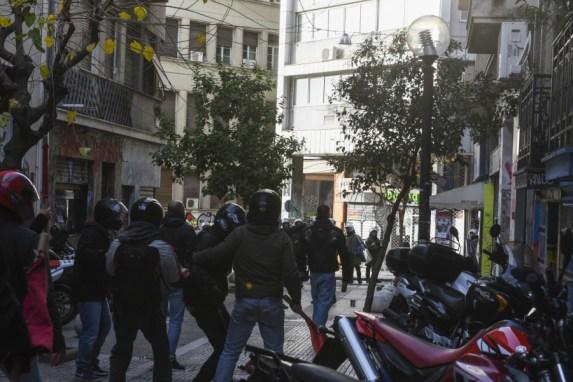 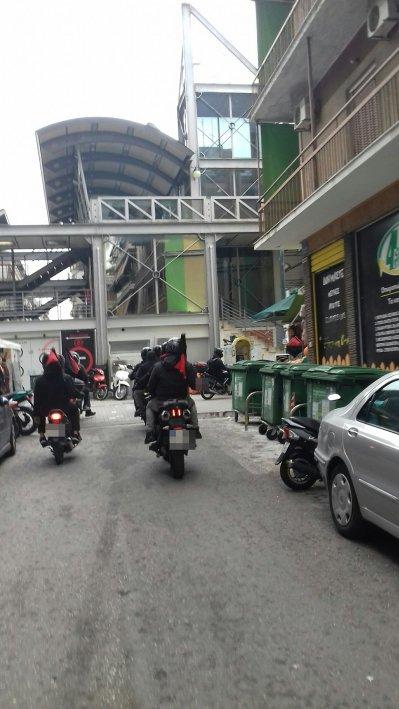 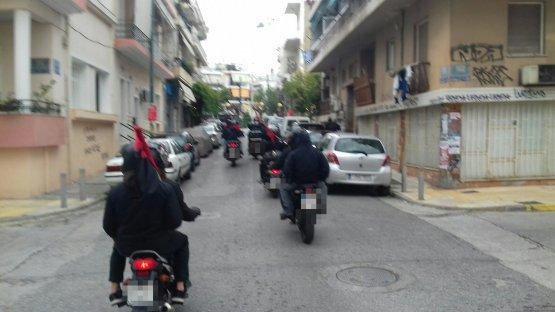 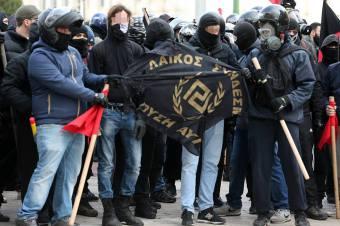 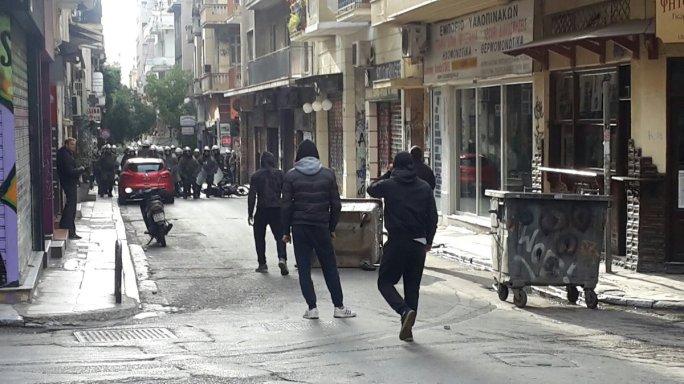 In Heraklion (Crete) antifascists also took the streets. The nationalist mobilization was a disaster on Crete. Antifascists patroled self-organized squats in Heraklion and spread information about the FYROM issue which was positively received from passers-by (images below). 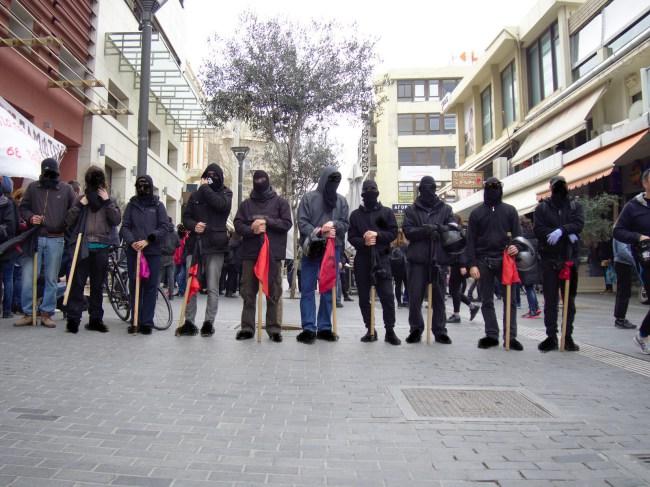 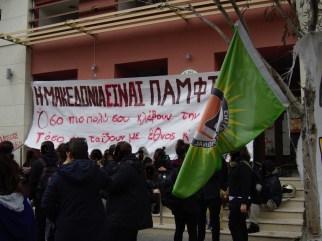 There is no "FYROM state" as far as the rest of the world is concerned. Don't use that term and pretend you're not supporting nationalist propaganda. 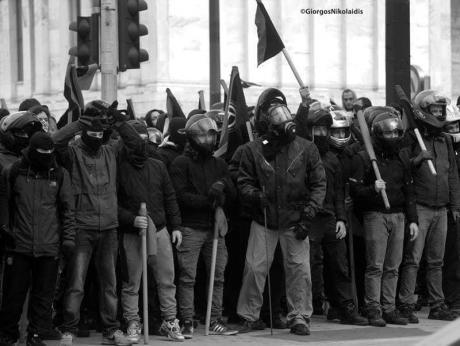 In Athens on Sunday 4th of February, a mass nationalist rally took place over the “Macedonian” issue. The police gave an estimation of 140.000 people, while the organizers speak of more than a million (!). Perhaps it had more people than the police’s official estimate but not even close to the organizers claims, which are more of a wishful thinking. This was the second demonstration within a month period over the same issue, the first being held in Thessaloniki in late January.

The “Macedonian issue” which triggered both rallies revolves, at least nominally, around the official name of a neighboring state, the Former Yugoslavian Republic of Macedonia (FYROM). The latter use Macedonia as its national self-designation, something that the Greek state has opposed because it is said to threaten Greek territorial integrity, which has a north region named Macedonia. It's a well-known issue in the Balkans and a real point of conflict between the Greek and Macedonian/FYROM state. Naturally, the Macedonian issue is also a topic that nationalists in both countries have invested a lot in order to promote their ideas and agendas.

While the issue dates back to 1992, when huge nationalist rallies took place in Greece for the first time, the controversy over the name has been rekindled by recent events in FYROM, whose new government appears to adopt a more open stance towards a mutual diplomatic solution. The Greek government appears divided over the issue, since the far-right minor partner, ANEL, opposes any solution that involves the use of the name Macedonia, while SYRIZA, the left major partner is in favor of such a pragmatic deal. The Greek government is also pressed by its ‘allies’ in NATO to find a solution which would lead to an uplift of the Greek veto over FYROM’s joining the organization. This provides the general geopolitical context of the Macedonian issue currently and determines the actions of the various political agents.

While the details are far from fixed, and they are many, the anticipated solution entails that the state of FYROM will have a composite name (e.g. North Macedonia or New Macedonia) that will use at all times (erga omnes). Greek nationalists bitterly oppose this kind of solution, since they don't want under any circumstances the neighboring state to have in its name the word Macedonia. It was with this hardboiled agenda, summed up in the nationalist slogan “Macedonia is one and is Greek” that the rallies in Thessaloniki and Athens took place.

Τhe heterogeneity of the crowd in both gatherings is quite real and there are many distinct agendas among the organizers, which perhaps in the long-run may not be so easy to balance. In the same streets yesterday there were Greek Macedonian cultural associations, with a barely veiled of course nationalist outlook, rightwing MPs from New Democracy (the major opposition party) and other political parties, various fascist groups and militants, including of course the neo-Nazis of Golden Dawn, and last but not least the Greek Orthodox church. All these groups make up what can be called the rightwing spectrum in Greece, which has traditionally “eclectic relations” with the deep state. It should be stated that part of the patriotic Left has offered verbal support to the rallies, claiming that they should not be disregarded as nationalist. However, as far as we can tell, no left group has mobilized its mechanisms and got involved in the organization of the rally.

There is thus no question as to the political coloring of the rally: it is a rightwing mobilization deploying a rhetoric that was clearly nationalistic and in many cases openly aggressive to the neighbor country. The rally was effectively challenging FYROM’s right to self-determination, a pillar of the modern system of nation-states. Of course, the whole story is a bit farcical since the term Macedonia has been used by the majority of other states for decades, but delving on the psychosocial and political aspects of this seemingly curious persistence of the nationalist rhetoric in Greece would require too much space. Inconsistency has certainly never stopped anyone from acting.

The presence of fascist groups in the streets of Athens, acting under the cover offered by the rally, has been a cause of alarm for the anarchist movement and an opportunity to show its antifascist reflexes. Worries were well grounded, since in the Thessaloniki rally fascists had attacked the ‘’Libertatia’’ squat and burned it down. Precaution measures had to be taken to protect the squats and social centers around the city of Athens and of course Exarcheia, the “heartland” of the antagonistic movement. Very important also was the protection of squats created to house refugees.

In order to coordinate efforts and offer an effective response assemblies and meetings tools place. Τwo broad goals were decided: apart from protecting squats and social centers all over the city to give a more coordinated, central political response to the nationalists by hosting an anti-gathering in the center of Athens. The key idea was not to let the streets at the mercy of fascist thugs.

Having set Sunday 4 as the landmark, an organized counter-campaign begun. All over town, anarchist and antifa political groups started intervening in the streets of Athens with texts about antinationalism, antimilitarism and internationalism. Saturday night, on the eve of the rally, antifa patrols took place in many neighborhoods of Athens. Worth noting is an attack at Golden dawn offices in Piraeus, which took place on 3/2/2018 and left some of the local leaders of the Nazis beaten. Moreover, there were clashes with riot police in Exarcheia and Monastiraki, whereby a comrade was beaten really bad by the cops and got arrested.

During the day of the rally the counter demonstration, held in Propylea (a square close to Syntagma where the nationalist rally took place) gathered around 2000 comrades, anarchists and radical left. Things were quiet since the riot police stood between the Antifa demo and the fascists. After 4 hours at the place, the demo turned back to Exarchia. Afterwards, there were a lot of fascist being chased around the neighborhood. The fascist failed to repeat their actions in Thessaloniki although they tried. After the natioanlsit really ended an organized attack took place, at Empros an occupied theater, very close to where nationalists were gathering. The squat however had taken the necessary precautions and antifascist defense managed to repel the fascists. There were rumors for a second attack but it never took place, while the police (expectedly) arrived after the whole event had finished.

Under the given circumstances our estimation is that things went well. The movement in Greece showed its reflexes and did not let the fascists turn the rally into a festive day for them. The message is clear: we will be there in front of them always. Having said that, the mass mobilization around a nationalist issue should keep us alert and make us reflect on our shortcomings and limitations. Nationalism is rising throughout the world and this requires an organized response that engages not only with the symptoms but the causes of the phenomenon. One thing is certain:

No nation unites us / no name separates us