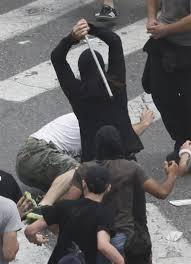 Antifa in Athens against a nationalist rally

Α nationalist/ fascist rally will take place in the center of Athens, Greece, on Sunday February 4.

The Greek government is desperate for a solution for the name of the Former Yugoslavian Republic Of Macedonia (FYROM). The solution anticipates that the state of FYROM will include the geographical definition of Macedonia in the final accepted name. Fascists and nationalists are opposing this kind of solution. They don't want under any circumstances the neighboring state to be named with the name Macedonia.

As a reaction to the use of Macedonia as a component in the final name of FYROM, tomorrow will take place in the streets of Athens, following the rally in Thessaloniki two weeks ago, another nationalist rally organized by the greek orthodox church and several nationalist organizations from all over Greece. Also, the neo-nazis of golden dawn will be there as well as other para-state militant fascist groups.

As for the anarchists and radical left, they call to a counter demonstration at a square nearby (Athens University Propylea). At the same time, many antifas will be defending squats all over town but also refugees squats in Exarchia and elsewhere. Already tonight, antifa patrols guard the Athenian streets from the nazi scumbags. In several occasions, there have been clashes with riot cops who protect the nazis in different areas of central Athens.

Not even a cm for the scum of the earth!
No borders, no nations!
¡No pasarán!