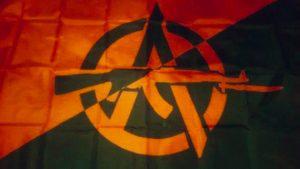 Anarchist Union of Afghanistan and Iran’s Second Communique: The Necessary of Armed Self-Defence Against the Murderous Regime

It is the essence and foundation of anarchism and quality of anarchists that when people rise up against states, they are quickly informed and they closely follow popular insurrection and revolutions, because anarchism is nothing less than the spirit of people’s disobedience. rebellion and will to revolution

Anarchism means anger, rebellion, and society’s attack on every oppression and injustice that are perpetuated by authorities and states. Since the anarchist is pragmatic and is calling for the overthrow of the state and the transformation of society, the anarchist knows radical struggle and popular revolution are the only way to undermine this power. According to the analysis and evaluation we had of the Iranian people’s uprising in November, a communique was written on the third day of the people’s protests and struggles by The Anarchist Union of Afghanistan and Iran to popular armed forces in order to arm the people before it was too late because there was a bloody massacre and murder approaching

This call was not answered and, as we are witnessing, it was a massacre and its scale is so terrible that it continues to encourage more people to become freedom fighters

We repeat, since time has not yet run-out and the killing will continue, the need is urgent for an armed revolutionary front to defend the people of this country against the murderers of the Islamic Republic of Iran to protect unarmed people in the streets during the time of insurrection and revolution, and we also need to have armed teams to hunt down the regime mercenaries who had a hand in killing defenceless people so that these mercenaries understand that killing the people will not be without cost

The existence of disagreement and fracture within the inner sanctums of power were not new, and have shown themselves since Rafsanjani (4th President of Iran form 1989 until 1997 who backed the Green Movement in 2009). Now, with this horrific crime has happened and mass slaughter of defenceless people, it appears that part of the government is further from the central core of power. The appearance of this difference and division after the massacre can be clearly seen in Mir Hossein Mousavi’s recent statement

The divisions within the new layers of power were not new, and have shown themselves since Rafsanjani, now that this horrendous crime and the mass killing of defenseless people have taken place, apparently part of the body of government far from the central core of power. The manifestation of this sharp divergence after the massacre can be clearly seen in Mir-Hosein Mousavi’s recent statement. The revolutionary confrontation with the agents of massacre will now deepen the rift and fear, and a large proportion of the regime’s agents are ready to break away from the power and paralyze the regime in greater repression and killing. Now it will cause a the revolutionary conflict with the regime’s agents of death—this deepens fear and widens the gap—and a large portion of the regime’s agents their readiness to abandon power and actually paralyze the regime preventing further suppression and killing

Given the proximity of the election cycle to the massacre, it looks like a great opportunity to combine and revolutionize the anger and shock at the regime to both punish the killers and intensify the psychological war against this regime of murder and torture so they lose the power of killing and oppression. It is not too late to defend the people’s will and freedom

Anarchist Union of Afghanistan and Iran