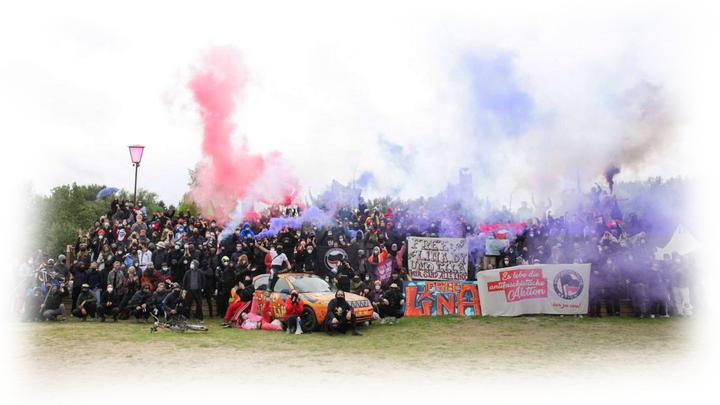 In recent years, the fascist right is on the rise in Germany: whether in parliament, on the streets, or at night, attacking refugee shelters. Here the role of the German state and its policies is clear: it
promotes, finances and welcomes the violence from the right. This is proven by an endless number of scandals – beginning with personal information of anti-fascists that is leaked, neo-Nazis in the police and
armed forces, to terror groups like the National Socialist Underground (NSU), which was able to kill ten people undisturbed for years, which it couldn’t have done without being covered by the state.

Especially in Saxony, where the neo-fascist party AfD is the strongest political force and large neo-Nazi actions have taken place repeatedly in recent years, the situation is even more dangerous. Here it is alarming to see, that all people, who oppose this threat face potential prosecution. Herefore, Saxonys Ministry of the Interior has come up with something special: The creation of „Soko LinX“ – a special police commission, whose goal is to screen the antifascist scene and drag antifascists and anti-authoritarians to the dock.

Our comrade Lina has been in pretrial detention since November 2020, as part of an investigation driven by the Federal Prosecutor’s Office (Germanys highest ranking State Attorneys). In a first trial, she and three other Antifas are being charged in the Higher Regional Court in Dresden. At the same time, a campaign by neo-Nazis and the media is underway with the aim of pre-judging them. For some media, no comparison is too horrifying: Lina is compared with the NSU’s Nazi-terrorist Beate Zschäpe, at the same time internal trial files are leaked by fascist magazines, including photos. It can be assumed that the German state will do everything possible to sentence our comrades to long prison sentences.

Terror Paragraphs – Not Only a German Specialty

Paragraph 129, the „formation of a criminal organization“, has been used in Germany mainly against progressive structures ever since its introduction in the 19th century. Over the years, it has been repeatedly expanded, and membership in, or support for, a terrorist organization has also been made punishable under § 129a. Especially in the 1970s it was used almost exclusively against groups engaged in armed struggle, and hundreds of people were arrested and faced charges for supporting these groups.

In 2017, under pressure from the European Union, this paragraph was changed again to target organized crime, motivated by financial or other material benefits, more effectively. However, this almost exclusively resulted in proceedings against political structures or such constructed by the state. So the use of this paragraph in Germany targets politically motivated acts. The Antifa East trial is an example of how easily something collectively committed can be turned into an organization and charged accordingly. Political motivation, an allegedly singular modus operandi and knowing each other is enough to confront individuals with several years in prison.

Similar laws to the German § 129 were enacted in many European countries and beyond: In Greece, people are currently facing investigations because they allegedly committed several crimes as an organization and signed with the same name, the slogan „friends and comrades“. This is a slogan used often in the movement. In Italy and Spain, police operations have been carried out over years and various people have been arrested or put under house arrest because they know each other, live in the same squat, or have distributed texts sympathetic with direct action, all under criminal law similar to § 129.

There are many examples of repression against comrades worldwide who are accused of being part of such organizations. These accusation do not only serve the German authorities to expand their repression, it is also part of an international networking of the authorities. The expanded powers allow the prosecution of those concerned across national borders, matching of data in databases and the entry into various international information systems.

It is not only in Germany, that tighter laws are being applied, especially since 9/11, to combat other anti-state movements. The means used for this purpose are applied against all those who are a thorn in the eye of the rulers and all those who question the states‘ monopoly on the use of power. Consistent anti-fascist, anti-capitalist and anti-authoritarian self-organization is persecuted with all means available and highly punished. The repression happens not due to the actions, but because of the danger emanating from emancipatory ideas. Those who are attacked, question the system and have proposed solutions and perspectives that are not compatible with the capitalist system.

It is precisely these ideas that need to be defended collectively. When the authorities network, expand their systems, exchange ideas and persecute us internationally, it is necessary to oppose them with international solidarity. The goal of repression is isolation and division. Solidarity with those affected and politically defending these ideas and perspectives are responses to the attacks on all of us. We will not be intimidated, but stand together behind our comrades worldwide. With demonstrations, rallies, posters, prisoner letters and much more, we show our solidarity with all those who are exposed to state repression.

Freedom for Lina and solidarity with all those affected by repression!