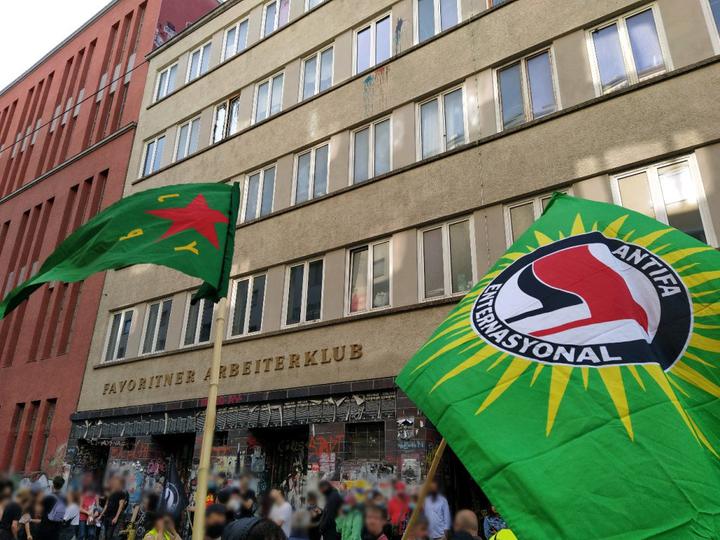 In the last two days (tonight fascists arenear the EKH again, so actually this is the third day) there were several fascist attacks in Vienna. A statement by some of the attacked EKH.

At the moment, Friday June 26th, 09:00pm (21:00) local time, fascists are around the EKH again. Many antifascists are gathering in front of the building. Updates on Twitter: EKH.

Statement on today’s events in Vienna Favoriten district from the EKH.

Turkish fascists attacked a rally on women’s rights and Kurdistan in Vienna-Favoriten on 24.06. After that, participants of the rally were attacked by fascists in front of the Ernst Kirchweger Haus (EKH). A solidarity protest followed in front of the EKH, in the course of which racist controls and the arrest of an uninvolved person by the police took place.

At the demonstration against fascist attacks the next day, Turkish fascists repeatedly tried to provoke, disrupt and attack the demonstration. After the end of the demonstration, far-right Grey Wolves, AKP supporters and self-proclaimed “guards of Favoriten” gathered again in the area and attacked the EKH after the police withdrew despite the obviously imminent escalation. 200-300 fascists rioted in Wielandgasse over a longer period of time and attacked the EKH with stones, bottles and fireworks and tried to enter the building by force. Several windows on the ground floor were smashed in the process.
Only through the solidarity of anti-fascists something bigger could be prevented. The police, however, remained inactive for a long time.

This was the second attack within two days on leftist and emancipatory structures and events and we do not expect it to be the last. These attacks are related to the repressive policy of Turkey under the leadership of Erdogan, which is currently terrorizing the Kurdish population and bombing Kurdish areas. But they are also part of a longer history of attacks on the EKH, in which Kurdish associations are also organised. Our solidarity therefore goes out to those affected by the Turkish aggression in the Kurdish areas, here in this country and also worldwide to all those who are committed to a more just society.

We call on all antifascists to solidarity and participation in further demonstrations.
Meeting place Saturday Columbusplatz. Come in large numbers!

Some from the EKH