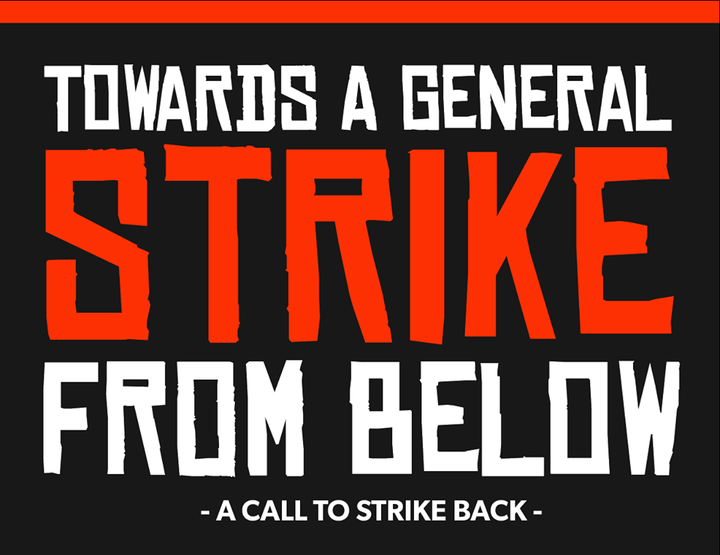 Towards a General Strike from Below

Things are rapidly proceeding in Sweden with the Social Democrats moving further to the right every day even as their party crumbles. The Social Democratic union, LO, the academics trade union confederation TCO and the Swedish Confederation of Employers (Svenskt Näringsliv) have from nowhere presented a deal to "Save the Swedish model" by inhibiting the right to strike. This deal is nothing but an attack on the working class and it's ability to fight back and gain some power in the everyday dictatorship that is capitalist work. This is class struggle in the clearest sense: on the one side the rich, the politicians, high level union bureaucrats, the state and the whole employing class and on the other us - we who have to sell our work to survive.

The struggle to protect the right to strike is proceeding at a rapid pace and within our grasp is the chance to push for a general political strike from below, an event that is unheard of in Sweden. The Strike Back action promises a space for radical political opposition from below and from the left, a situation that is sorely needed in these times of reaction. There is an amazing movement of rank-and-file members within many unions and by unorganised workers and we want to be a part of this and aid in pushing it further towards victory and autonomy. As always, we go to the streets not just with the aim of winning in this moment but in creating common experiences and common power for the future.

We must take to the streets and push the general strike into life itself, not just as this event, but as a mass refusal of the world of the bosses. This is not just a Swedish situation: similar events occur in Norway with the attacks on the Dockworkers there, in Finland where years of austerity have reigned but there have been intense moments of base-level struggle and in Denmark whose reactionary developments in Social Democracy but simultaneous promising developments in radical unions seems like a mirror to hold up to Swedish society. Across the whole of Europe the right to strike is attacked, austerity is imposed and we are told that this is the only way. This is not the case. As internationalists we realize that the struggle in one place affects struggle everywhere and in particular the Nordic countries affect each other. That is why we call everyone to Stockholm not as the end of a campaign but as the start of a new development on the scale of northern Europe to seize the initiative and to get to the meaning of the word strike: refusal, refusal of capitalist politics as usual.

We must create a French situation where struggle in the streets and strikes in the workplaces together create a social movement which not just stops attacks on the working class but opens up a political space for offense, for winning. We believe that the perspective of logistics is a promising arena for intervention and encourage all organizations and affinity groups to lock down the logistics of capital, to stop this machinery of domination and money, and strike back in Stockholm 25/8 and beyond. Let's create Paris in Stockholm, let's create a new world in the refusal of this one!

There are trips organized in many cities, such as Oslo, Copenhagen, Malmö and Helsinki. Keep an eye on our Facebook page ( https://www.facebookcorewwwi.onion/AutonomousRevolutionaryN… ) for more information.