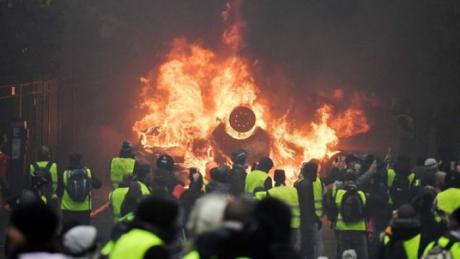 The Yellow Vests’ protests cause traffic jams in west-London warehouses

A friend of ours works in a small warehouse in west-London that organises shipments between the UK and the British Virgin Islands. Recently conveyor parts deliveries were delayed by road blockades in France, organised by people who protest against the diesel tax increase. But not only that, they were also delayed by the cumbersome sub-contractor system within the logistics chain. The chains are weak, let’s lose them! Here is his story...

“I'm going to explain how the recent protests in France have affected our warehouse. We were waiting for some conveyor belts parts that urgently needed shipping to the Virgin Islands. It seems that the local government on the British Virgin Islands ordered these conveyor belt parts from a Spanish company named Introle last September. The company I work for is specialised in organising shipments between the UK/EU and the Virgin Islands (it’s maybe the only logistics company in the UK in that logistics chain). We received an email from Introle to collect the conveyor belt parts at the factory in Spain. Our warehouse manager contacted Cargotrans, our transport partner in the EU. The problem is that Cargotrans uses the subcontractor TGN for the truck deliveries in Spain. Introle turned down the TGN truck, expecting a Cargotrans one. This is how the parts got delayed initially due to subcontracts and miscommunication.

A few days later we received an email from Cargotrans stating that due to the protests in France the truck has had difficulties and was blocked in France. This meant that the parts missed the scheduled cargo flight from Heathrow.”

things (or workers!) don’t work, we realise how we are all connected..

Angry Workers of the World