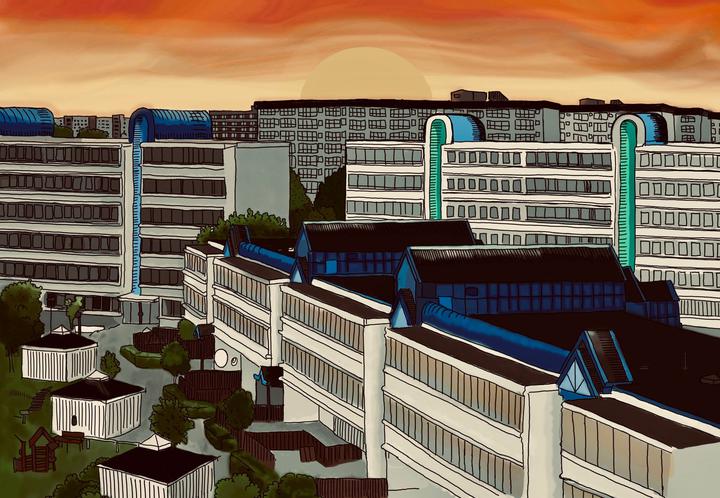 A Recollection of events:

A short while ago, it was announced that Danish racists had decided to come over to Malmö to burn a Quran.; notably Rasmus Paludan, founder of the alt-right party Stram Kurs (Hard Line). Paludan along with his racist agitators applied to Swedish authorities for permits to burn the Quran in multiple locations, however they were ultimately denied. The day came, Paludan was stopped at the border, turned away, and given a two year ban from entering Sweden. Even though we received this news, comrades remained on patrol around the city intending to prevent the racist spectacle and demonstrate solidarity against such loathsome acts of hatred. Unfortunately though, a few of his party members managed to enter the city unnoticed and appeared at Stortorget, one of Malmö's central squares. Proceeding some discussion and arguments with passerby's and comrades, they were surrounded and protected by the police. After a surrealistic show of hate speech against Islam, the vandalism and abuse of a Quran, which consisted of kicking, throwing, and tearing, police arrested some of them and sent the others home.

A few hours later, a video was released showing the racist scum burning a Quran next to a bike path between some bushes on the outskirts of the Rosengård neighborhood, an area inhabited largely by the migrant community of Malmo, hiding from the people in a place where few could see them, they reached their goal in the most cowardly of fashions.

Frustrations were high among anti-fascists and Muslims alike. The police and local government had made countless statements that the destruction of the Quran would not be allowed in Malmö, but in the end, they protected the racists as they spouted hate and conducted their abhorrent acts. This naturally does not constitute a surprise. The cops, in Sweden and everywhere for that matter, have a special tolerance and sensitivity towards the "freedom of speech" for nazis, the alt-right, fascists and all walks of racist scumbags. A short while later, these frustrations developed into something much more productive.

The evening started with people gathering at a large intersection next to the place where the scripture was burned. It started out as an organized blockade of people with the intent to disrupt traffic. This demonstration was composed mostly of Rosengård residents along with comrades. The police showed up early on but were focused on containing the demonstration rather than ending it. The atmosphere steadily developed as hundreds flocked to the intersection and dusk began to fall. The first fire was lit using pallets from a nearby warehouse and the police committed their first act of force using tear gas and stomping out the blaze. However as the demonstration continued to swell, the police pulled back to a visible but safe distance and many more fires were lit. Eventually, a respectable person of Rosengård led the people to drive the police out of the neighborhood, they were no longer welcome there.

As the first rocks were thrown at the police, it was immediately clear that the night was going to result in a firey demonstration. Dozens of police vans swarmed the area and swaths of riot police fell upon the people with batons and tear gas. Meanwhile, riot vans plowed through groups of protesters as people ran for their lives. Mind you, this was an event that, up until the use of police violence, was attended by the young, the old and everything in between - images of toddlers on their fathers shoulders is brought to mind. The attendees scrambled to avoid being run down by vans and beaten by the cops. The police were able to reoccupy the intersection as the protesters regrouped. They only held it for around 15 minutes as the event progressed into a full-blown police riot. They were pelted with stones and makeshift weapons (mostly torn down street signs) as protesters flowed through the streets. Eventually, the police were forced to retreat, not just from the area, but they were almost completely pushed out of Rosengård. The people had won back the streets from the police and demonstrated that they feared neither police nor the racists they protect. The rest of the night continued with the building of barricades, the destruction of capitalist infrastructure, and clashes with police as the people of Malmö worked side-by-side to secure our streets. Eventually, things lulled into quiet as people returned home and the fires died out. Overall, this was a victory for those who stand together against racism, xenophobia, and police brutality but unfortunately, the media portrayed that night in an entirely different way.

The mainstream media of Sweden has slandered the protest in every way possible. That is why we feel the need to address it for those who are less informed on the issue. The media has framed this demonstration as violent, antisemitic, and extremist; we feel the responsibility to respond to such claims.

First off, we will address the violent aspects of the protest. We are not attempting to distance the protest from violence, as we do not denounce the use of violence in insurrectionary actions, but to give clarity on who truly has been perpetuating violence and why a violent response was necessary. To start with, the burning of the Quran, the protection that the Swedish state offered to the racists of Stram Kurs and their collaborators is an act of violence against the Muslim population in Malmö and in Sweden more generally. No, we are not defenders of any particular form of theology just as we are not defenders of any particular ethnicity. We are people passionately committed to justice, autonomy and respect. We see these racist and xenophobic provocations as part of a systemic repression on behalf of the state against migrants, against difference, against cultural diversity and against the working class. As anarchists, anarchists of colour, anarchists who are migrants ourselves and indigenous anarchists, we perceive migrants as class siblings. From the fires of the Moria concentration camp and the repression of thousands of newcomers in Greece to the racist assassinations of black people by police in the US and the burning of the Quran in Rosengård under the protection of law enforcement, the racist Western State continues to unleash its brutal attack against the most vulnerable links: people on the move, people of colour, the pariahs of fortress Europe. The people of Rosengård returned to their oppressors a glimpse of the violence that they experience everyday. And we were there to show solidarity with our siblings, being part of the social anti-violence that was formed in Rosengård that Friday night.

This is another case of the perpetual violence that minorities are facing every day from the Swedish police. Last year they launched a repressive program called Rimfrost which has been portrayed as an effort to curb gang violence and drug use/dealing, but has actually just given the cops more impunity to arrest, beat, and dehumanize minorities in Rosengård. In doing so, co-creating with the far right the absurd false reality of no-go zones that work to further justify the presence of state violence in our communities. The police conduct violent acts against minorities here every day and along with how they brutalized protesters, the response from the people was legitimate. Police here can harass, beat, arrest, and kill people without anyone batting an eye but as soon as a young minority picks up a stone to stand up for themselves, they are deemed a violent criminal.

Due to the media's report on alleged antisemitic chants carried out during the demonstration, our community has a responsibility to address these claims independently from the events of the night. In order to fulfill that responsibility and amplify the voices of those directly affected by such actions we have turned to a local Jewish comrade, who is experienced with working against antisemitism in their activism, for perspective on the issue: "antisemitism has no place in our community but in this case painting those protests as antisemitic violence should be seen as a cover up for police brutality. If antisemitic chants were present, it was an action of few individuals not the community as a whole. Jews and Muslims stand together against racism, hate, Islamophobia and antisemitism" As stated, we stand against antisemitism in all forms. However, from our knowledge, antisemitism was not largely apparent in this protest and had nothing to do with the motives behind it. The media has focused a huge amount on this alleged incident of an antisemitism and we must see it for what it is. It is an attempt to de-legitimize the protest and steer public awareness away from what this demonstration was actually about. The people were fighting back against police brutality and racism. If there were individuals with antisemitic views present, they represent no one but themselves, they do not belong in our communities and they will be unwaveringly opposed to - as should always be the case in our communities.

The corporate media continues to portray the protest as extremist and illegitimate but that is false. This was a spontaneous radical protest against oppression inherent of the system. They say that this protest was made up of "extremist Islamists" but that was not the case. This was a revolt constituted by the people of Rosengård, who decided to unite and fight back against their oppressors. Do not believe what is being proliferated by the mainstream media, they are attempting to slander and de-legitimize a successful uprising against the system.

We, as Anarchists, stand against racism and police brutality, in solidarity with migrants and all of those being suppressed, dehumanized, attacked by state and capital. In relation to the night of the Rosengård uprising, we stand with those most affected by these events to show the rest of Sweden that those tendencies will be opposed. This uprising was legitimate and necessary and we will continue to show solidarity with movements such as these in the future. You may think that the burning of scripture is fine within democracy, but we know what these actions can lead to, in the words of Heinrich Heine, "Wherever they burn books they will also, in the end, burn human beings". We know the dangers of such things and we will fight back to prevent such developments from taking place. As in any kind of liberal state, the police stands for and is responsible for a monopoly of violence including the control and attacks in our neighborhoods as they harass and harm both us and our neighbors. We oppose the institution of the police and support those who fight back against them to keep their communities safe. We are in solidarity with the people of Rosengård in their struggle against oppression of all forms. This uprising was well beyond justified, as Anarchists we support it, and we will continue to support uprisings such as these so long as justice is not achieved.

Let us turn into the stone in the hand of the oppressed.

Solidarity with the oppressed

For a world of freedom, equality, and solidarity without borders, racism, oppression and exploitation...

Are we sure cops used teargas? If so, that is a first, and pretty surprising considering police doctrine.

Yes! I also heard Stram Kurs was ordered by the Swedish state to commit these provocations, but the state or capitalist media won't report on that. They want to violently divide the working class

hej Malmö anarchist... it is so boring that you have to defend the swedish state... again! Antifa and social democracy. yeah!