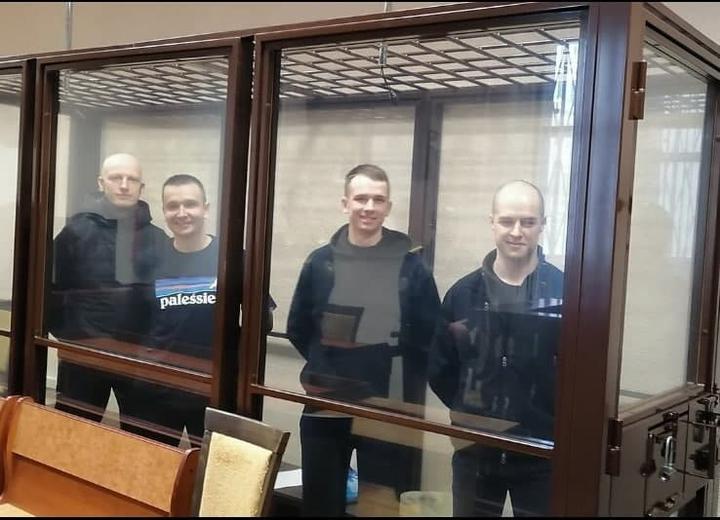 So, the verdict to the anarcho-partisans has been pronounced. Ihar Alinevich and Siarhei Ramanau were sentenced to 20 years in prison each, Dzmitry Rezanovich to 19 years and Dzmitry Dubouski to 18 years under the articles “terrorism” and "illegal trafficking of weapons. There was nothing unexpected in this, all the four partisans did not repent of anything and did not ask for leniency. After the first 15 minutes the court was closed to public, because it became clear to the punishers that they would not be able to crush our comrades and make a show trial. Even being held captive, in the cage of the court room, the comrades posed a threat to the authorities. The political sentences announced today were a record for the history of modern Belarus. Neither dissident bloggers, nor opposition members claiming power, nor military personnel “guilty of high treason” have received such attention from the regime. The sentences for the anarcho-partisans are only recognition of their revolutionary merits and the return of the anarchists’ good name as real fighters for freedom.

All four are committed revolutionary anarchists, that is, advocates of the ideas of popular self-government and a stateless society based on cooperation and solidarity. Considering all strands of anarchist activity to be important: enlightenment, alternative, social protest, and rebellion, revolutionary anarchists realize that power will not abolish itself; it is only possible to radically change the power and property relation by means of a revolution.

Revolutionary anarchism is not afraid of the word Illegalism and supports the tactics of constant attacks on the infrastructure of the political system and capital, including police stations, courts, banks, deforestation equipment, etc. Denying cooperation with any authoritarian associations (those supporting the state), revolutionary anarchists believe that the people are capable of making a social revolution on their own. Being part of the people, they do not claim leadership or avant-gardism. When the comrades saw that the people of Belarus were rising up to fight against the dictatorship, they could not stay away. They decided to take part in the Belarus uprising, to inflict damage on the punishers and, if possible, to advance the anarchist agenda, thereby contributing to the cause of popular resistance.

Ihar Alinevich, Dzmitry Dubouski, Dzmitry Rezanovich, and Siarhei Ramanau are long-time participants in the international anarchist movement. But this does not make them fanatical sectarians or hardened party figures. Their dedication to constant self-improvement, combined with great courage, has made them outstanding fighters, who have already entered not only the history of modern Belarus, but also of the entire Eastern Europe.

All of them dream about a just and free world. But they are not idle dreams about an unattainable ideal in the distant future. They strive to implement this ideal and to touch it themselves, here and now, to show by their own example that history is not predetermined, and everything depends on us.

They did what their anarchist-revolutionary conscience told them to do. All these immeasurable prison terms have nothing to do with real life. Anarcho-Partisans will remain imprisoned as long as we allow the bloody Belarus dictatorship to remain in power and will go free when it is overthrown. Our comrades have done all they could for the cause of freedom, now it is up to each of us.