Report from the 2017 Helsinki without Nazis -demonstration 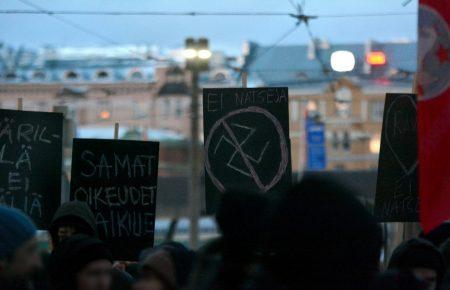 A report from a member of Varis Helsinki who participated in the Helsinki ilman natseja (Helsinki without Nazis)- demonstration, organised by anarchist group A-ryhmä and the Left Youth of Helsinki. Varis Helsinki was one of the many official supporters of the event. We will soon publish a more detailed analysis of the far right demonstrations on Independence Day 2017.

At a buzzing Hakaniemi square with a sound truck blasting music, the atmosphere was simultaneously a bit tense as well as almost festive, as is usual in big demonstrations. A colourful and diverse group of people had gathered in Hakaniemi, and the image of a black-clad and masked crowd was definitely not aligned with reality. Crammed into a small corner of the square, the demonstration appeared surprisingly small, but as it started moving, with people joining in along the way, it was immediately clear just how many people once again had come out to voice their opinion about Nazis. Looking over my shoulder, the mass of people continued farther than the eye could see, and far ahead of me as well.

The organisers of the demonstration had counted the participants, concluding that as the demo was passing the Central Railway station, there were about 3000 people attending. During the event, the official estimation from the police was 1000, grossly underestimating the attendance. This estimation was directly copied by the media and the Nazis alike. The signs carried and the chants heard were well known from previous antifascist demonstrations, with the drumming group Rhythms of Resistance supporting all the way through. Apparently music was also played from the sound truck in the front, but a lot more trucks would have been needed for music to reach all of the demonstrators.

The demonstration paused at the Railway Square to pay tribute to Jimi Karttunen, who was killed by Nordic Resistance Movement (NRM) member Jesse Torniainen at the very spot a little over a year ago. After this the demo proceeded past Kamppi along Mannerheimintie. Upon arrival on said road, the demo surpassed the close-by Nazi demonstration Kohti vapautta (towards freedom, organised by NMR), however at least the writer of this text couldn’t see the other demonstration. The official estimation was around 300 Nazis at that demonstration. At the corner of Narinkkatori in Kamppi, a wall of police, previously nowhere to be seen, were securing the Nazi demonstration and yet again making sure that they would not be disturbed. A small incident took place on Mannerheimintie, as a man dressed in a camoflauge jacket was trying some sort of solo attack at the front of the demo, but after a football-like dive was quickly left complaining at the arriving police who removed him from the scene.

The march continued in the same spirit all the way to Hesperia esplanade, where police confronted the demo, standing in tight rows clearly signalling that the 3000 people who oppose Nazism have to make room for a couple hundred Nazis who were at the same time crossing the esplanade further on Runeberginkatu. The planned route of the demo was to proceed directly to the western side of Runeberginkatu, into Hesperia park, however due to the pace the police apparently decided that the best option was to stop the masses even before crossing the street. 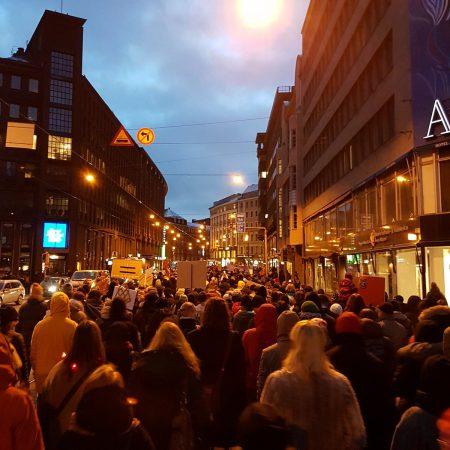 As the green and white banners of NMR alongside those of Junge Nationaldemokraten -group (eng. Young Nationaldemocrats, the youth organisation of the The National Democratic Party of Germany, NPD) with their red and white flags, and other left-over-nazi banners were seen waving over the rows of police, the celebratory mood rightfully changed to anger at least at the front of the demonstration and shouts were directed over the rows of police to the passing Nazis making sure they knew what people thought of their presence. The tail of the demonstration was so far reaching that some weren't aware of the passing Nazi march since they were nowhere near it. After the lines of police made way, the demo continued to its planned end point in the park, where the programme included speeches and performances from Julma H and Pastori Leksi. Activists of the asylum seekers' Right To Live- demonstration also brought their greetings to the attendees.

At this point most of the participants had started to make their way back from the park. After about an hour the word reach the crowds that the 612 -demonstration had started to gather nearby and people who were still left began moving towards Runeberginkatu shouting chants, accompanied by drums. A wall of police confronted the demonstrators and made any movement in the direction impossible, and as more police arrived around the esplanade, people started to disband and move away from the crammed pack. After the official Helsinki ilman natseja- event, determined individuals were giving their best effort to harrass and disturb the fascist torch march. Among others, eggs and bottles were said to be seen flying towards the torch march and the police did make multiple arrests on the scene. The torch march was mostly left undisturbed, apart from constant shouts at them, and arrived in Hietaniemi cemetery as planned. According to estimates, 1100 to 1500 people took part in the march (the number will be more accurate after video analysis) and its potential for Finland’s 100th year of independence was left mostly unused. It does seem like the number of attendees has reached its peak. The organisers’ own statements that as many as 4000 people were present is of course pure fantasy on their part. 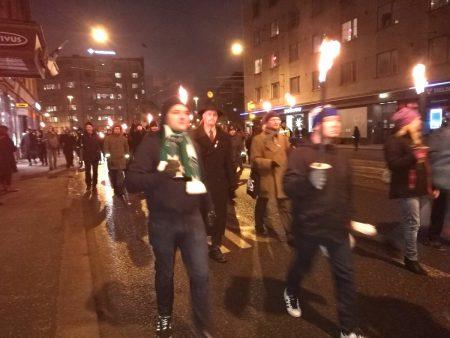 Up front NRM:s known and active nazi Jesse Torniainen with the groups

Hännikäinen are both founders of the online traditionalist magazine

Sarastus (“The Dawn”) and members of neofascist organisation Suomen

As a summary of sorts, the day left me with mixed feelings. It was amazing how many people could be mobilised for the demonstration, one that is big for Helsinki by any measure. Despite the cops’ weird estimates and laughs from the Nazis, a considerably bigger anti-fascist crowd had gathered than in all the demonstrations together it was opposing. Especially the NMR march, one that Helsinki ilman natseja over-shadowed by multiple factors in attendance, appeared to be a sad last effort. The support from Soldiers of Odin and other shittier nationalists known from Youtube certainly didn’t lend them more credibility. A couple hours later the sight in torch-filled Töölö was chilling though. Opposing openly violent Nazis is important, but it is also necessary to limit the political space for fascist that are aiming at becoming more credible in the public view, especially when the same Nazis are allowed to march there relatively comfortably. Even though every single action is also critically important, the strength in opposing Nazis is in numbers, numbers that are also needed to oppose torch marches and other events of the like. If and when such events are held in the future, we urge everyone to act in with high spirits in groups until the end, and plan ways of continuing organised action beyond demonstrations. We look forward to a more diverse and numerous opposition to Nazis next year!