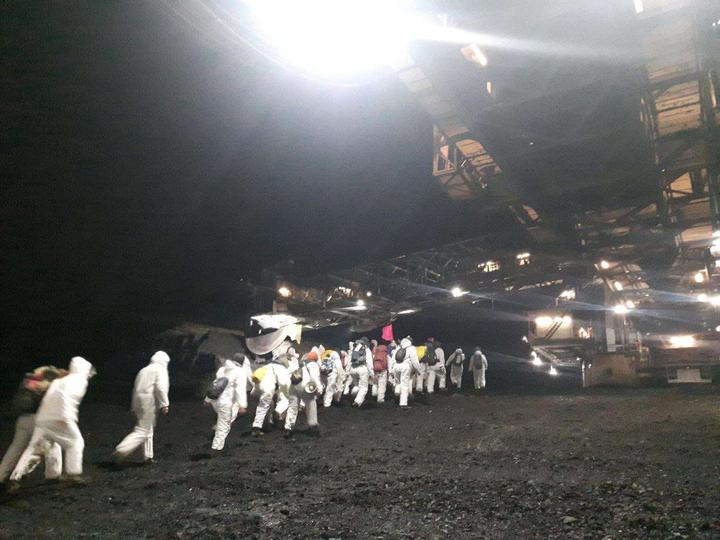 ++ Ende Gelände blocks the Rhenish mining area ++ Coal excavators in the Inden open pit mine and coal railroad to the Neurath power plant are at a standstill ++ “Lützerath lives! From now on, Lützerath is everywhere!” ++

After the village of Lützerath was evicted yesterday despite fierce resistance, today climate activists* of the alliance Ende Gelände are blocking lignite infrastructure in the Rhenish coalfield. Since early morning, around 50 activists have been occupying a coal excavator in the Inden open pit mine, while an action group of around 150 people has been blocking the tracks of the North-South coal railroad to the Neurath power plant. Ende Gelände is part of the coalition “Lützerath Unräumbar” and had announced civil disobedience against the coal company RWE for today. The action alliance wants to achieve the immediate stop of brown coal and the exit from all fossil energies.

Charly Dietz, spokesperson for Ende Gelände:
“We are making a clear announcement today. Even if you destroy Lützerath, we will continue to fight: Until you stop burning coal, land fracking gas and build highways. We carry our resistance to the places of destruction and oppose the destroyers. In recent days, coal mines and party headquarters have been occupied, RWE’s corporate headquarters have been blocked, and civil disobedience has been carried out in many cities. And today we are paralyzing the Inden open pit mine and stopping the coal supply to the dirty Neurath power plant. With Lützerath, a great cohesion of all who fight for climate justice has emerged. We show: Lützerath lives. From now on, Lützerath is everywhere!”

The Neurath power plant, operated by RWE, burns coal from the Garzweiler open pit mine, on the edge of which lies the village of Lützerath. It is transported there via the north-south railroad. Neurath is the largest power plant in Germany and is considered the second largest CO2 emitter in Europe. Block C, which has already been shut down, will continue to burn lignite until June 30, 2023, following the disputed agreement between Economics Minister Habeck and RWE. At the Inden opencast lignite mine, the energy company RWE can still excavate up to 113 million tons of lignite until its expected closure in 2030.
In terms of greenhouse gas emissions, RWE is the dirtiest company in Europe. Currently, a lawsuit against the energy company, which is considered historic, is pending at the Hamm Higher District Court: The Peruvian Saúl Luciano Lliuya lives like another 50,000 people in one of the risk zones of the climate crisis and accuses RWE of being partly responsible for the destruction of his livelihood.

Luka Scott, spokesperson for Ende Gelände, comments:
“Lützerath represents everything that is wrong with fossil capitalism: politicians negotiate anti-democratic deals with corporations like RWE in the back room and then enforce them with police violence. And all this to secure the profits of fossil capital, although the price is destruction. Those who continue to mine lignite are setting off a climate bomb – with catastrophic consequences. Millions of people in the Global South are already living in the hotspots of the climate crisis. Global climate justice is also being fought for in Inden and Garzweiler. We stand here in solidarity with the people in the Global South. We will ensure a year of resistance. Everywhere!”

The Ende Gelände action alliance is part of the broad alliance “Lützerath Unräumbar,” to which various groups in the climate justice movement have come together to oppose the expansion of the Garzweiler II open pit mine. Since 2015, Ende Gelände has repeatedly mobilized for blockade actions against open-pit lignite mines in the Rhineland, Lusatia, and the Central German lignite mining area, often involving several thousand activists*. In recent years, protest actions against LNG terminals and fracking gas were added.